Welcome to the Elite Eight, Texas/Red Dirt style On to Round 4 of the LSM Ultimate Texas Country vs. Red Dirt Album Showdown 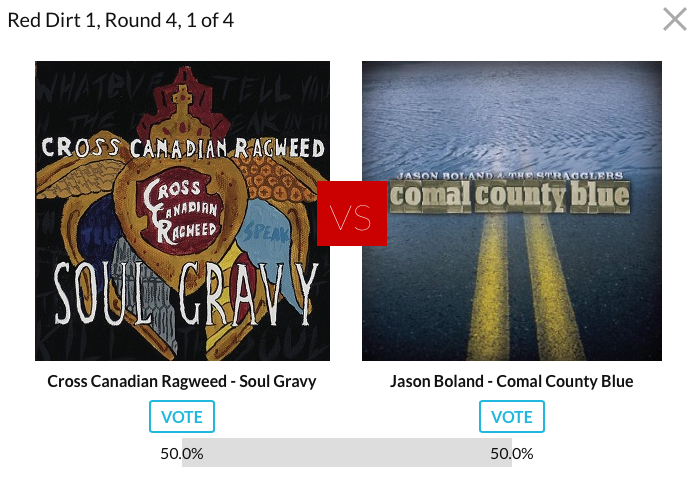 We’re not gonna say there haven’t been any surprises in this little just-for-fun tournament we’ve been hosting. In the first round alone, we saw the legendary Ray Wylie Hubbard’s mighty Snake Farm cut down by whippersnappers Whiskey Myers and their Firewater, along with early exits by both Kacey Musgraves and Miranda Lambert — each of whom on their own has probably sold more albums nationally than all the other artists on the bracket put together. Meanwhile, over on the Okie side … well, OK, that hasn’t exactly been upset city: Many an excellent record (and artist) was knocked out in the first couple of rounds, but if you didn’t know from Day One that powerhouses Cross Canadian Ragweed and Jason Boland and the Stragglers — along with relative “newcomers” Turnpike Troubadours — were going to be going strong deep into the tournament, well, clearly you haven’t been paying very close attention to the whole scene much over the last couple of decades. Those guys all secured their tickets to the semis long before we even threw this thing together.

And now we’re down to Round 4, aka the “Elite Eight.” Round 3, as predicted, was brutal — but far more so in theory than in actual practice. In fact, out of the eight match-ups, only one came down to a margin of less than 20%: Cross Canadian Ragweed’s Soul Gravy (57.4%) over the Troubadours’ Goodbye Normal Street (42.6%). By comparison, the Troubadours’ other album, Diamonds & Gasoline, crushed Stoney LaRue’s Velvet 92.5% to 7.5%, and Ragweed’s self-titled “Purple” album won just under twice as many votes as Boland’s formidable Pearl Snaps. Boland’s still got Comal County Blue in the game, though, with a convincing win over Mike McClure’s Everything Upside Down (74.2% to 25.8%). As for the Texas pairings, Reckless Kelly’s Wicked Twisted Road came out on top in our battle of the Braun Brothers, beating Micky & the Motorcars’ Careless 88.6% to 11.4%. And the Randy Rogers Band’s Rollercoaster finally put the breaks on the wild ride of the runaway Firewater: Whiskey Myers may be the current kings of Southern rock on the Texas scene, but they were no match for the breakthrough album by Rogers and Co. (final tally: 78.5% to 21.5%). It’s also the end of the road for Pat Green’s Carry On, which fell to Wade Bowen’s Lost Hotel 65.6% to 34.4%, as well as for Robert Earl Keen’s Gravitational Forces, which was beaten by Ryan Bingham’s Mescalito 68.5% to 31.5%. (Just a reminder: All of the albums in the tournament were released within the last 17 years — going back to the launch of LoneStarMusic.com — just in case you were wondering why Keen wasn’t represented here by Gringo Honeymoon or A Bigger Piece of Sky.)

So now we’re down to eight remaining albums. And come this time tomorrow, we will have our Final Four. Who will it be? Will Boland and the Stragglers avenge their fallen Pearl Snaps by beating Ragweed’s No. 1 seeded Soul Gravy? Or will CCR and Turnpike fans agonizing over the matchup between Cross Canadian Ragweed and Diamonds & Gasoline vote for Soul Gravy just to balance out all their votes for Diamonds & Gasoline? And honestly, we have no clue how things are going to shake out on Texas side, where it’s Randy Rogers vs. Reckless Kelly in a head-on clash of the Texas music titans and dark horse Ryan Bingham’s career-making Mescalito facing off against, well, the Bowen record that bested nothing less than the most beloved album of Pat Green’s career.