LSM Ultimate Texas Country vs. Red Dirt Album Showdown, Round 3 It's "Sweet 16" time — and down to a battle of the Braun Brothers 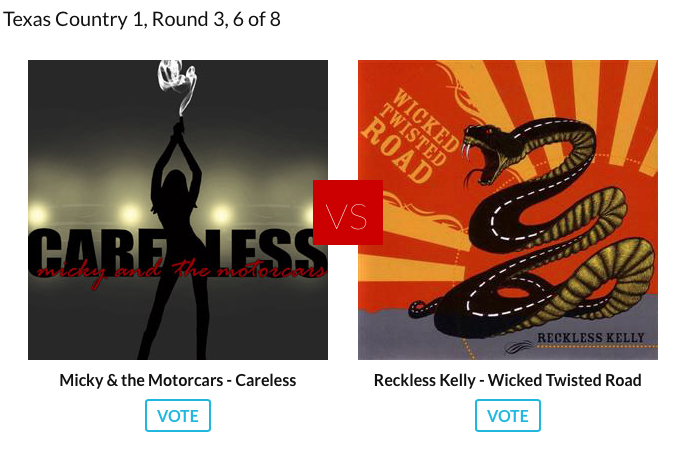 We’re two rounds done and four to go (counting the finals matchup) in our LSM Ultimate Texas Country vs. Red Dirt Albums Showdown, with our initial pool of 64 contenders winnowed down to eight big dogs left on both sides of the bracket. And needless to say, if you thought the voting up to this point was hard, you’re in for some really, really tough decisions. So tough, in fact, that we’re giving you a little extra time to mull ’em all over: You have from now until Monday, May 30 at 3 p.m. to make your picks before we march on to the Round of 8.

We’ll spotlight some of those “Sweet 16” match-ups in a moment, but first … a look back at all the worthy contenders we had to say goodbye to at the end of Round 2. On the Okie side, gone are two of the brightest young singer-songwriters on either side of the Red River: John Fullbright and Parker Millsap, whose albums were dispatched by Turnpike Troubadours’ Goodbye Normal Street and Cross Canadian Ragweed’s Soul Gravy, respectively. Also gone are one album each by Mike McClure (Foam) and Stoney LaRue (The Red Dirt Album), though both artists are still in the hunt with Everything Upside Down and Velvet (which, incidentally, beat Foam). That leaves just three artists on the whole bracket who still have more than one album in contention: Cross Canadian Ragweed with the aforementioned Soul Gravy and their self-titled “Purple” album (which beat out This Is Indian Land by frontman Cody Canada’s other band, The Departed); Jason Boland and the Stragglers with Pearl Snaps and Comal County Blue; and Turnpike Troubadours with both Diamonds & Gasoline and Goodbye Normal Street.

Over on the Texas side, it looks like the party’s over for Charlie Robison’s Life of the Party, which was busted by the Randy Rogers Band’s Rollercoaster. Wade Bowen’s Lost Hotel shut the door on the Casey Donahew Band’s hope for a Sweet 16 spot, and Pat Green’s Carry On will do just that over the vanquished Aaron Watson’s Shut Up and Dance. Ryan Bingham’s Mescalito squeaked past Hayes Carll’s Trouble in Mind in a tight race, Robert Earl Keen’s Gravitational Forces was too mighty for Cory Morrow’s Nothing Left to Hide, and Whiskey Myers’ underdog Firewater continues its Cinderella story by pulling the plug on Jack Ingram’s Electric. Also gone: William Clark Green’s Rose Queen, beaten by Reckless Kelly’s Wicked Twisted Road, and — in the tightest matchup yet, 49.9% to 50.1% — the Josh Abbott Band’s She’s Like Texas fell to Micky and the Motorcars Careless. Which leads us to …

Family feud time! We all know the Brothers Braun get along just fine in the real world, but we’re pitting Willy and Cody (Reckless Kelly) and Micky and Gary (Motorcars) against each other and only one band of Brauns will be moving on to next week’s Round of 8. And the other seven match-ups in this round are just as intense: Soul Gravy vs. Goodbye Normal Street; Pearl Snaps vs. Cross Canadian Ragweed; Comal County Blue vs. Everything Upside Down; Diamonds & Gasoline vs. Velvet; Rollercoaster vs. Firewater; Carry On vs. Lost Hotel; and Gravitational Forces vs. Mescalito.

Yeah. Have fun with those, folks. Starting … NOW.

Next post Welcome to the Elite Eight, Texas/Red Dirt style