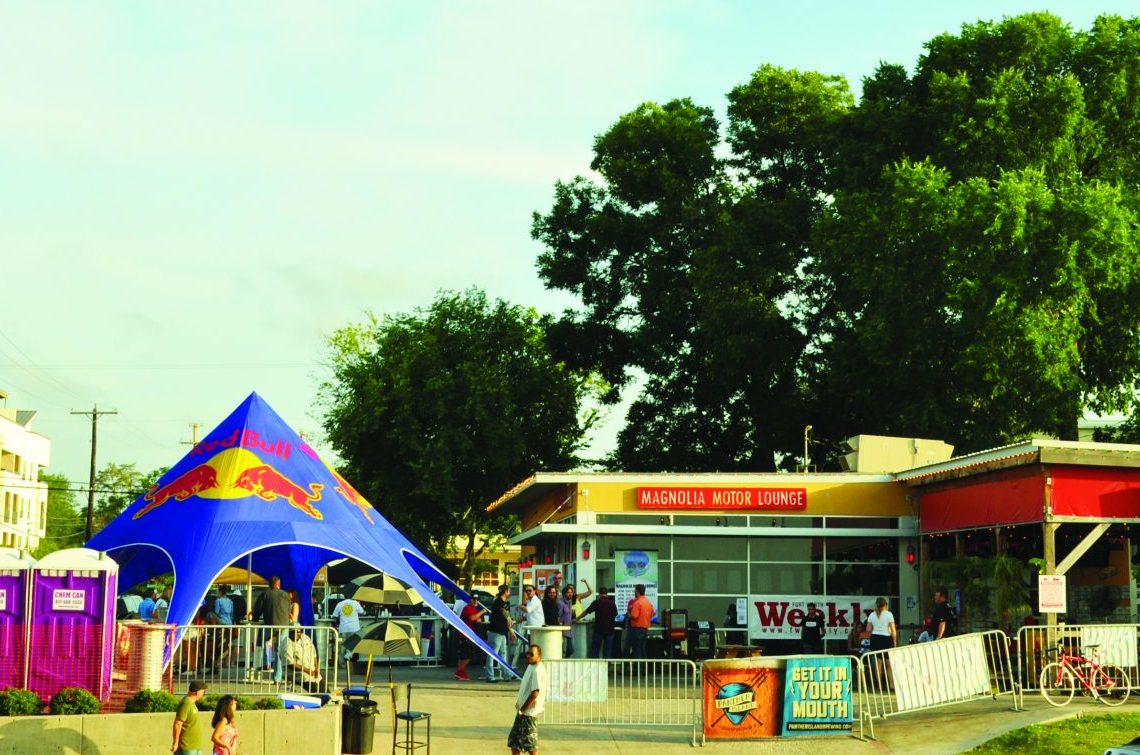 On an elevated corner in an increasingly bustling Fort Worth neighborhood sits a former transmission repair shop that now stands as the star of a district where live-music, food and great local beer have replaced power tools, empty store-fronts and general drabness. Since October of 2011, the Magnolia Motor Lounge — situated in the party-ready West 7th Cultural District just a couple of miles west of the scenic downtown — has become a destination spot for not only TCU students or people visiting the nearby Fort Worth Zoo, but for music lov- ers from every corner of the Dallas-Den- ton-Fort Worth triangle.

Things really took off for Magnolia Motor Lounge when current owners Grayland, Matthew and Bethany Smith bought the venue in August of 2012. Since that point, Bryan Beckman, a respected vet- eran of the north Texas music scene who previously ran Fort Worth’s Woody’s Tav- ern for 11 years, has booked the diverse array of local, regional and nationally known musical talent to fill-out the demanding seven-nights-a-week schedule.

The versatile venue can easily accommodate crowds up to 1,000 strong, like the one that came out for the Quaker City Night Hawks’ Honcho album release show, but also feels “just right” for more intimate singer-songwriter showcases.

“One night, Bobby Bare Jr. left it all onstage to an attentive but small crowd,” recalls Beckman fondly. “And on many of our Sunday Americana and country mati- nee shows, you can hear a pin drop during performances by Walt Wilkins, Max Stalling, Bonnie Bishop, Susan Gibson and more.”

Beckman’s expertise in bringing in great acts and the venue’s quality sound system and communal vibe are all certainly key ingredients to MML’s success, but there’s also no over-stating the added allure of adding deep-fried bacon to the irresistible mix. Truly, a trip to the MML is worth it just for the Magnolia Custom Burger alone. The decadent burger — piled high with a runny egg, strips of chicken-fried bacon, grilled mushrooms and pepper jack cheese — is but one of the stars of the varied menu. The draft beer selection is every bit as impressive, and they make a top-notch martini, too.

“I’ll usually grab a few [beer-braised pulled pork] Garage Tacos before I take the stage, that’s my go-to — and I always get whatever cool IPA they have on tap when I’m there, too,” says singer-songwriter Drew Kennedy, who has made MML his primary performance stop among the many choices there are to play west of Dallas.

“I love the people behind the place,” enthuses Kennedy. “They truly care about music. They care about creating a meaningful partnership between the venue, the artist, and the audience. That’s how you build a lasting business: Bottom line, it’s the people.”

Next post After Awhile: LSM Oct/Nov 2014 (Shovels and Rope)