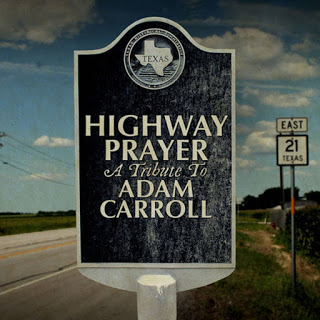 Given that Texas troubadour Adam Carroll is neither dead nor “famous,” some might deem him an odd if not outright questionable pick for a tribute record. Fair enough, I suppose — though it seems one could counter argue that those are two of the three reasons that actually make the 42-year-old Carroll the best kind of candidate for such an honor, along with the fact that the guy just happens to write really great songs. Slaid Cleaves, quoted in the liner notes to Highway Prayer, calls Carroll’s work “artisanal songwriting” — the kind of stuff you may not find in the mainstream, but that reminds the “fortunate few” that do find it “that great songwriting can connect you to your neighbors, your fellow humans, even your own jaded heart.” Ten years ago, Cleaves recorded a whole album (Unsung) covering songs by a handful of different songwriters (Carroll included) that he deemed worthy of championing — not because they were famous, recently departed or even necessarily major influences on his own work, but rather simply because he felt their songs deserved and needed to be heard. That same selfless, purely for the sake-of-the-songs sense of purpose is very much at play here, too, albeit with more than a dozen different artists all coming together to shine the spotlight on one of their own.

That “one of their own” part is rather key, too. Although a few of the artists featured on Highway Prayer have achieved a fair measure of success and fame as Americana “stars” (namely, James McMurtry and Hayes Carll) or as beloved cult-favorites on the national folk scene (like Cleaves and Terri Hendrix), for the most part nobody here is markedly more — or even less — well known than Carroll himself. These are all “artisanal songwriters,” most of whom still play the same listening-room and house-concert circuit that has sustained Carroll’s career now for coming up on 20 years. Some have opened for him, others have had him open for them, and just about all of them have probably swapped songs with him in a song circle before, be it in front of an audience or a backyard fire pit. And odds are every one of them can name at least one Carroll song — maybe the very one they happen to be covering here — that upon first hearing caused them to feel some measure of outright jealousy on Adam’s behalf, followed immediately by guilt (because it’s pretty much impossible to harbor any ill will towards Carroll, onstage or off), a flash of self-loathing despair, and finally, a desire to buckle down and write a song of their own worthy of following it. So in banding together now to sing Carroll’s own songs back to him — while he’s thankfully still around to hear them — they’re not just doing their part to hopefully grow his audience; they’re also effectively thanking him for keeping them all inspired and challenged by writing those songs in the first place.

For the uninitiated, pretty much any one of the songs here offers a textbook example of why Carroll’s work strikes such a chord with discerning music fans and fellow songwriters. Though he’s drawn some lazy comparisons to Townes Van Zandt, he’s actually far more of a Guy Clark type, forgoing fancy metaphors in favor of matter-of-fact vignettes sharper than a Randall knife. It’s not just that you can you smell as well as see every detail in his songs, from the trash sack full of rib bones in “Screen Door” to the second-hand menthol smoke in the back of the “Smoky Mountain Taxi”; it’s his masterful way of quickly sketching startlingly vivid scenes and three-dimensional characters in such a disarmingly natural, folksy vernacular that never sounds labored or highfalutin. What’s more, so frequent  — and casually delivered — are his brilliant little turns of phrase per song, it’s often hard to catch them all without repeated listens; during a recent live performance of Carroll’s “South of Town,” Cleaves paused in the middle of the song just to marvel and chuckle at the line “the air smells somewhat clean.”

In the spirit of doing  justice to Carroll’s craftsmanship in a manner as sincere and down-to-earth as the man himself, none of the artists here have taken overt liberties with his original arrangements or melodies. Hell, they even make a point of copying his habit of announcing each song by name before playing it (a sweet, playful gesture that admittedly gets a bit old after awhile), and “musical director” Lloyd Maines — producer of a handful of Carroll’s own records — is on hand to keep everyone in tune and quality control on point. That keeps the focus squarely on Carroll’s lyrics from start to finish, though the artist and song pairings for the most part complement each other just smartly enough to subtly enhance the distinctive charms of each. For example, Cleaves’ raspy tug of a voice feels just right for knocking around the aforementioned “South of Town,” and Jamie Lin Wilson brightens the feel-good acoustics of “Hi-Fi Love.” Further down the 15-song track list, banjo wizard Danny Barnes brings an extra layer of bluegrass authenticity to “Smoky Mountain Taxi,” and Terri Hendrix breezes through the breathless wordplay and harmonica solos of “Red Bandana Blues” with free-spirited hippie aplomb. And to close things out on a truly spiritual note, Walt Wilkins infuses “Highway Prayer” with a stately sense of grace and beauty that stirs the soul as much as Carroll’s words move the heart.

Of course, picking highlights on any various-artist tribute album is always going to be subjective. Doubtless many listeners — perhaps in particular those less familiar with Carroll himself — will gravitate first to James McMurtry’s opening cover of “Screen Door.” But however irresistible the combo of one of the most compelling voices in Americana music and one of Carroll’s very best songs may seem in theory, to this listener it’s Highway Prayer’s one notable miscasting. Mind, this is not a knock on McMurtry’s impeccable performance or the song itself; but for some reason I just find it hard to buy that guy in the role (sung in the first person) of Carroll’s lovesick busboy pining for a pretty waitress; instead of aching for the protagonist as he turns out the lights at closing time and pledges his love from behind the Coke machine, I kinda just want the girl’s tool-pusher fiancé to hurry up and get her out of there. I can’t help but wish that McMurtry had instead picked the exquisite (but missing here) “Blondie and Dagwood” or “Ricebirds.” Or that maybe either of those gems could have at least been given to Owen Temple or Michael O’Connor, two longstanding Carroll collaborators who are rather inexplicably missing from the lineup (though O’Connor does play guitar on a couple of tracks.) And speaking of missing voices, another female artist or two would have been nice for the mix as well; surely Wilson, Hendrix and Brennen Leigh (who sings harmony with Noel McKay on “Karaoke Cowboy”) weren’t the only eligible ladies in the Adam Carroll fan club.

All that said though, it feels churlish to really nit pick a project assembled with as much care and love as Highway Prayer, and one overall done so well, to boot. Props are due to every artist who answered the call to join this choir, and especially to co-producers Jenni Finlay and Brian T. Atkinson — not just for recognizing in Adam Carroll a songwriter who absolutely deserved his own tribute album, but for somehow even coaxing the humble honoree himself into writing and singing a brand new song on it. Fittingly, Carroll took that opportunity to pay tribute to one of his heroes, the aforementioned Lloyd Maines. The result, called “My Only Good Shirt,” might be a little too on the nose to objectively rank among the best songs he’s ever written; but as a delightful bonus track on this record made for all the right reasons, it fits like a charm. — RICHARD SKANSE