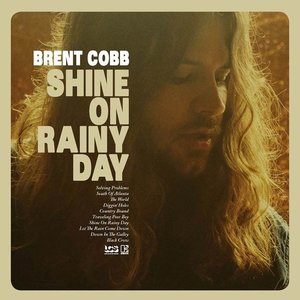 Brent Cobb’s been writing hits in Nashville for a while now, and his bright, sunny lyrics and familiar, folky melodies have already proven to be a winning combination for Miranda Lambert (“Sweet By and By”) and the Eli Young Band (“Go Outside and Dance”). On Shine On Rainy Day, his major label debut, the native Georgian shows off his understated charm with a collection that celebrates the everyday joys of country life. The backing tracks feature the guitar work of his cousin, producer Dave Cobb, played through a phase shifter and other pedals to give the tunes an icy, atmospheric sound, but it’s the only modern touch on an album that takes its cue from the traditional sound of country music’s rural past. “Solving Problems” uses simple acoustic picking to describe the playful conversation of two friends who sit on the front porch “solving all the problems of the world.” The title track celebrates the relief a sad song can bring to a broken heart as Cobb quietly sings, “laughing ain’t a pleasure, till you know about cryin’.” He takes a more biting approach on “Diggin’ Holes,” the confession of a spouse who can’t stop hurting the woman he loves, even though he knows he’s breaking her heart. Cobb’s understated vocals are as natural as his melodies. Even at his most anguished, he never has to raise his voice to make his point. — j. poet