Tom Russell: “The Rose of Roscrae” 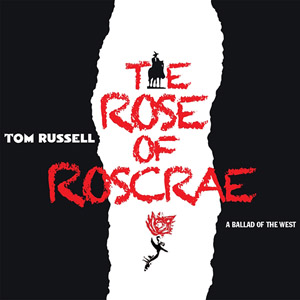 Tom Russell could well be a contender for the title of the world’s most interesting man. In addition to being an acclaimed musician/painter/author, he has exchanged letters with Charles Bukowski, studied criminology in California, and played music for a Puerto Rican circus. Ramblin’ Jack Elliot and Ian Tyson served as the best men at his wedding to his beautiful Swiss wife. He’s called the West Texas town of El Paso home for years now, but he’s also lived in Spain, Norway, and New York City, where, working as a cab driver, he played his passenger, Robert Hunter of the Grateful Dead, his song “Gallo Del Cielo.” Duly impressed by the tale of the rooster from Heaven, Hunter invited Russell to join him onstage at the legendary Greenwich Village folk club the Bitter End — and then become his regular opening act. Since then, he’s performed his own unique brand of cowboy/Tex-Mex-infused Americana all over the world, had his songs covered by the likes of Johnny Cash, Guy Clark, Joe Ely, and Dave Alvin, and even moved pre-retirement David Letterman to once enthuse, “I’d like to quit my job and travel with him … if the money can be worked out.”

Along the way, Russell has released more than 30 albums, but never anything quite like this. More than 20 years in the making, The Rose of Roscrae is truly the man’s magnum opus: a two-disc, 52-track folk-opera/musical. Yes, you read that right. In the 82-page “Program Guide with Libretto” — sold separately but pretty indispensable — Russell refers to The Rose of Roscrae as “Les Miserables with cowboy hats.”  Or, as he told his audience at Austin’s famed Cactus Cafe earlier this year, “It’s Sam Peckinpah meets Shakespeare at the Coen Brothers house.” Hell, it even includes a dance number!

True to most Broadway musicals these days, Russell has assembled an all-star cast to play the miscreants, desperadoes and ne’er-do-wells that inhabit the epic tale of the sometimes outlaw, sometimes cowboy Johnny-Behind-the-Deuce, and his first and last love, the Rose of Roscrae.  The album kicks off with the high lonesome voice of Jimmie Dale Gilmore singing the traditional cowboy lament “Bury Me Not On the Lone Prairie,” and, as the story wanders along the long road to redemption, from Ireland to the American frontier of the late 19th and early 20th centuries and back to Ireland again, we encounter such familiar Americana mainstays as Guy Clark, Joe Ely, Augie Meyers, Jimmy LaFave, Gurf Morlix, Eliza Gilkyson, Ramblin’ Jack Elliot, David Olney (giving a Tony Award-worthy performance as Judge Squig), Gretchen Peters, Ian Tyson, and even the late-greats Johnny Cash, Lead Belly and Walt Whitman. There’s also the Norwegian Wind Ensemble (the world’s oldest continuously running orchestra of any kind), a student choir from the Waverly School of Pasadena, Calif., the McCrary Sisters (who worked with Bob Dylan during his gospel years), Irish chanteuse Maura O’Connell, a Swiss Yodel Choir, and Ana Gabriel, the voice of Mexico.

Although Johnny and Rose’s love is the main narrative thread, Russell’s opus also serves as a passionately assembled collage of history, myth, literature, poetry and traditional songs of all sorts. Of course, this being a Tom Russell album, that means lots of “cowboy” songs, like “Red River Valley” and “The Streets of Laredo,” which fit right in here next to his own songs both new and old (“Sky Above, Mud Below” and “Gallo del Cielo”). There’s also gospel songs, the blues, Tex-Mex border music and even German-inspired polka.

Russell hopes that his musical will one day see the bright lights of the Great White Way. It would certainly be a Broadway show unlike New York has ever seen before. In the meantime, spend some time with The Rose of Roscrae, the record: As Johnny-Behind-the-Deuce learned, she’s a beautiful force to be reckoned with — and you might even learn something along the way. — TIFFANY WALKER