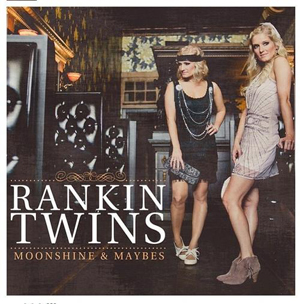 The Rankin Twins aren’t lying when they sing they’ll “bring the swagger.” For their first full-length album, the Texas Twins (Amy and April) successfully bust-out just about every weapon they can in order to craft a debut that comes off as anything but a beginner’s record. Much of Moonshine & Maybes’ substance can be credited to how the now-seasoned Twins wisely waited to release a long-player instead of rushing one out as soon as they started gigging a few years back. They also lined-up some legitimate talent in the form of Ben Danaher, Thom Shepherd and Drew Womack, among others, to lend an instrumental, vocal and writing hand. In fact, although the Rankins (together or separate) were involved in writing nine of the record’s 10 tunes, it’s the one song on the album they didn’t write that showcases Moonshine’s irresistible appeal at its best. With the Rankin girls singing their spritely hearts out about a Jesus-hating drunk redhead and Noah Jeffries of Milkdrive playing the hell out of his fiddle and mandolin, the romping, stomping “Jezebel” (written by Paul Eason) will light up any barn it’s played near. — KELLY DEARMORE