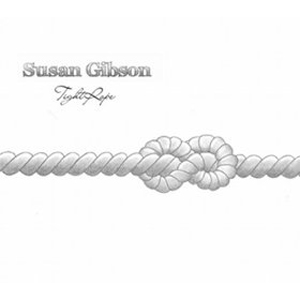 Go ahead and judge Tight Rope by its unapologetically Spartan cover; if it’s fancy frills and showy instrumental chops you’re after, move right along. Despite having penned one of the biggest country hits of the past, oh, quarter century (the Dixie Chicks’ career-launching “Wide Open Spaces”), singer-songwriter Susan Gibson has never been much for flash, either onstage or on record. But even by her own down-home standards, Tight Rope — Gibson’s fourth solo release since leaving the Groobees a decade ago — is as bare-bones and fuss-free as a bedroom demo. Sure, producer Gabe Rhodes contributes a light sprinkling of subtle bells and whistles (from banjo, mandolin and melodica to “chair squeaks” and even a slinky), but by and large, it’s the simple strum, strum, strum of Gibson’s acoustic guitar and the warm, casual rasp of her voice that’s left schlepping the full weight of the album. Fortunately, all 10 of the songs here come equipped with the kind of easy carry melodic hooks that suggest Gibson’s well of potential chart hits is far from dry. Lyrically, she stays mostly in the tried-and-true comfort zones of relationship-related themes, albeit with an unerring flair for the kind of keen insight displayed so effectively on the sweetly poignant “A Stray.” When Gibson sings, “I can’t tie you down, but I want you to stay/I need you around, but you were always a stray,” it’s not the species of the subject (cat? dog? man?) that matters; it’s that universally relateable ache of coming to terms with a love that doesn’t always give as good as it gets. — RICHARD SKANSE

Next post The second coming of the Duct Tape Messiah