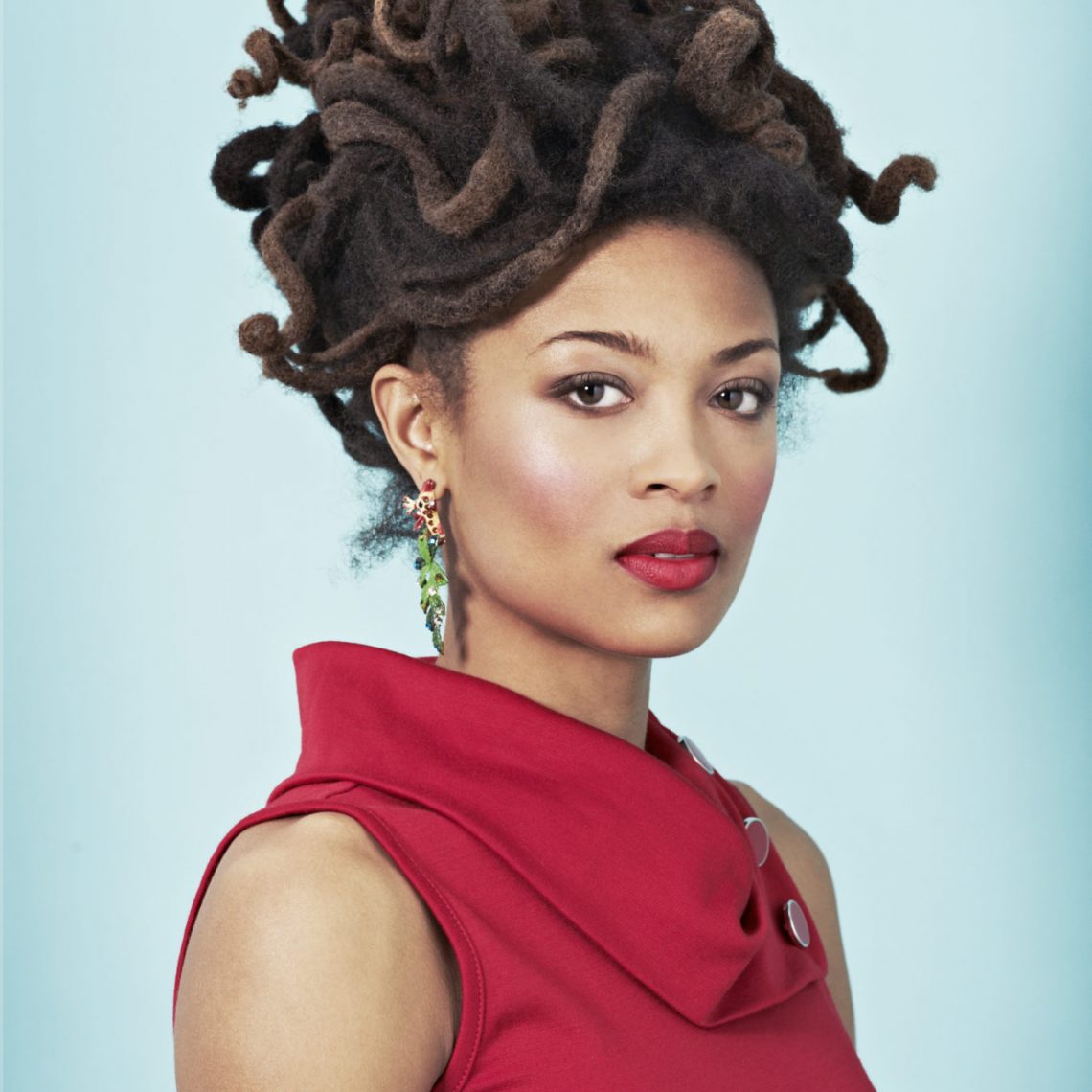 Before Valerie June hit a single note that October Saturday in Zilker Park, those clustered around the tiny BMI Stage as she made her Austin City Limits Music Festival debut could tell they were about to have their perceptions altered — even if they didn’t know exactly what those perceptions were. 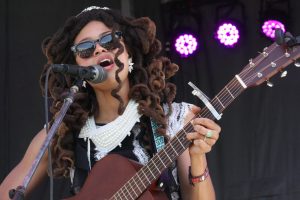 Standing before them was a young woman in turquoise knee socks and boots, the black pencil skirt emphasizing her slim hips offset by the prim pearl collar draped over her lace-adorned top. A rhinestoned, tiara-like headband barely contained the mass of curly brown dreadlocks tumbling around her high-cheekboned face, accenting her light mocha skin. Even half-hidden behind huge Wayfarers, she was stunning.

Was she a neo-soul shouter? A reggae priestess? The array of instruments clustered around her suggested differently: a Martin dreadnought, a cherry-red Hagstrom electric that Luther Dickinson of the North Mississippi Allstars gave her from his own collection, a banjo, and a cute baby banjo (which she actually calls “Baby”). Then she picked one up and began strumming and singing, revealing a voice haunted by the souls of never-freed slaves, hungry children, and battered, cheated-on wives. A voice that carries both the broad twang of Appalachian country and the deep sigh of Delta blues, gathered in a one-room church to send those poor souls heavenward on gospel wings.

Simultaneously ethereal and earthy, her vibrato-free tone takes a minute to get used to. But it quickly turns enthralling, whether she’s performing a doo-wop/girl-group influenced song like “The Hour,” which she co-wrote with the Black Keys’ Dan Auerbach, or her stark murder ballad, “Shotgun.”

When she delivered the latter tune that Saturday, she swooped from a high note to a low near-whisper as her dirty-south slide slithered along the Martin’s neck, fanned by the long scarf anchoring it on her slim finger. No slouch as a picker, her prowess (and self-assured stage presence) becomes even more impressive when she reveals that she didn’t begin playing until her early 20s, less than a decade ago.

Valerie June Hockett’s first inkling that she might have a musical future came in fourth grade, after she performed Woody Guthrie’s “This Land is Your Land” for her class. The resulting praise kindled a dream — one she quashed quickly, telling herself, “I’m a little girl from Humboldt, Tenn. I’ll never be able to be a singer. I need to be from New York; I need to have a big life.”

So thoroughly did she convince herself, she even chose cheerleading over music in high school. But she pored over the James Taylor and Carole King CDs she acquired after hearing their songs on a local classic-rock station, and stored the information in a mental library already containing Tracy Chapman and Odetta — a role model she discovered while studying black history in second grade.

“Whoa, who is this woman?” June recalls thinking, reflecting on her career origins a few weeks after her ACL Fest appearance. “‘She plays guitar, she’s got an Afro, she’s a big woman.’ It was very different than from what I was seeing of black women. They were Whitney Houston.”

Those impressions stuck. And even though her public singing occurred only in church — a predominantly black congregation at first, then an almost all-white one when her family moved to a new neighborhood — her head stayed filled with music.

“I wrote songs in my mind, just singing to myself as I was goin’ through life,” June says. “That’s how it’s been. I’m more of a songwriter than I am a player. Songwriter and singer.”

She moved to Memphis at 18, married at 19 and formed the duo Bella Sun with her then-husband. They recorded one album, No Crystal Stair, before divorcing in 2005. 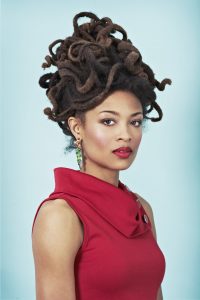 “A lifetime ago,” she says now. Back then, gigs followed long days spent laboring at jobs from dishwasher and housecleaner to dog walker and cook; with each task, she repeated affirmations to boost her confidence as she practiced her craft and envisioned a different future. She says the title of her new Concord Records album, Pushin’ Against a Stone, and its first track, “Workin’ Woman Blues,” perfectly convey her life then.

The album, her major-label debut, is actually June’s third solo release. Her first was 2006’s The Way of the Weeping Willow, recorded not long after she started writing down the songs that come to her as voices (with and without words). Mountain of Rose Quartz came in 2008. In 2010, she recorded the EP Valerie June and the Tennessee Express with the Old Crow Medicine Show. That followed her appearance in the 2009 MTV series, $5 Cover, about musicians trying to make a living and follow their muses in Memphis.

The Old Crow EP convinced her she was ready to seek funding for a “real” album. She had planned to work with producer Craig Street, whose credits include Cassandra Wilson, Norah Jones, and Meshell Ndegeocello. But fate intervened. After spotting her on YouTube, producer Kevin Augunas, who’d worked with Edward Sharpe & the Magnetic Zeros and the Lumineers, flew to Memphis to hear more. (By then, June had moved to Brooklyn with her now-second husband, Hungarian video artist Farkas Fülöp, but she returns home regularly.) She played Augunas dozens of songs, and said she’d like to try writing with others someday. He wanted to record her, but she had committed to Street. Augunas said to get in touch if she ever wanted to work together.

Then Augunas asked her who she might like to try writing with. She mentioned Gillian Welch, M. Ward, and Auerbach. He knew Auerbach, who agreed to a writing session after watching a video of her performing “The Drifter” — “playin’ banjo and kickin’ on a piece of plywood in my apartment.” More sessions followed.

“Then Dan said, ‘My studio’s finished and I’d really like to record some of these songs,’” June explains. “I was like, ‘Hmm, but I’m supposed to make this Kickstarter record.’ So it just took a detour.”

Augunas and Auerbach wound up producing most of the album at Auerbach’s Easy Eye Sound in Nashville. Augunas captured two tracks at his Los Angeles studio and June recorded one with Peter Sabak in Budapest.

The two L.A. tracks, “Somebody to Love” and “On My Way,” feature one Booker T. Jones on organ and backing vocals. He also co-wrote the latter tune. That came about from June’s deal with publisher BMG Platinum Songs, who offered to set her up with the California-based Stax soul legend.

“We hit it off so well. We just had such a great time, and he was such a great mentor to me,” she says. They co-wrote several songs, and she played him “Somebody to Love,” her first ukelele composition. He loved it and said he wanted to play organ on it. There’s more to come from that collaboration, she hints.

The Hungarian recording occurred while she and Fülöp were wintering there. Fretting that the album needed more work, but unable to afford it, she found herself “getting mopey.” Fülöp finally insisted she get out of the house and go hang out with his bass-playing friend, Sabak, who asked if he could invite his drummer buddy.

“We got in the room, the three of us, and we started playin’ ‘Workin’ Woman Blues,’” June remembers, “and it was magic.”

Excited, she called in a trumpeter friend. Sabak hit “record” — and turned a classic case of the blues into what already sounds like a blues classic.

But June still fretted after finishing the album, fearing the world would regard it as Auerbach’s. She pondered, “Do I want to give up my journey to go on somebody else’s journey?”

Among those she consulted during her two-year bout of indecision was North Mississippi Allstars guitarist Dickinson, son of the late producer Jim Dickinson.

“His father was the first producer to hear my music and say, ‘I want to work with that girl.’ Then a month later, he passed away,” June says, still forlorn. Later, while recording 2012’s Go On Now, You Can’t Stay Here: Mississippi Folk Music, Vol. 3 as a member of the Wandering, Luther’s Mississippi/Tennessee folk-blues supergroup (also containing Amy LaVere, Shannon McNally, and Sharde Thomas of the Rising Star Fife & Drum Band), Dickinson told her, “Dad always wanted us to work together.”

They’re still tight. His advice, she reports, was “‘Put it out! Just put it out.’”

Finally, she did, first allowing a May European release, then going stateside in August. Media outlets quickly crowned her “a major star-in-waiting” and “one of the most important voices in folk-blues for decades to come.”

June is honored, but unfazed. Tempering her sweet Southern charm with clear-eyed realism, she remarks, “One of the great things about my start in music is that I have an awesome foundation that grounds me. 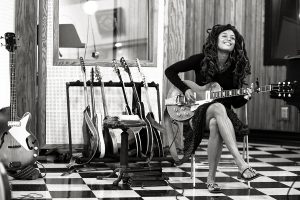 “Folk music and blues music … there’s nothin’ new that anybody can do in it except channel their own experience and their raw emotion and make it their own. So there’s nothin’ new about what I’m doin’ and there’s nothin’, really, that I have to live up to, other than continuing to take my life experience and put it behind the songs that come to me,” she says. “As long as I can continue to do that, and keep my foundation solid and know that any day I decide to quit music, I know how to survive and make a living, then I feel like I’m fine.”

Previous post Whiskey Myers: The calm before the storm