Songs & Stories of San Marcos: Scott H. Biram One man, a bunch of guitars, and a whole lotta "all sorts of music" 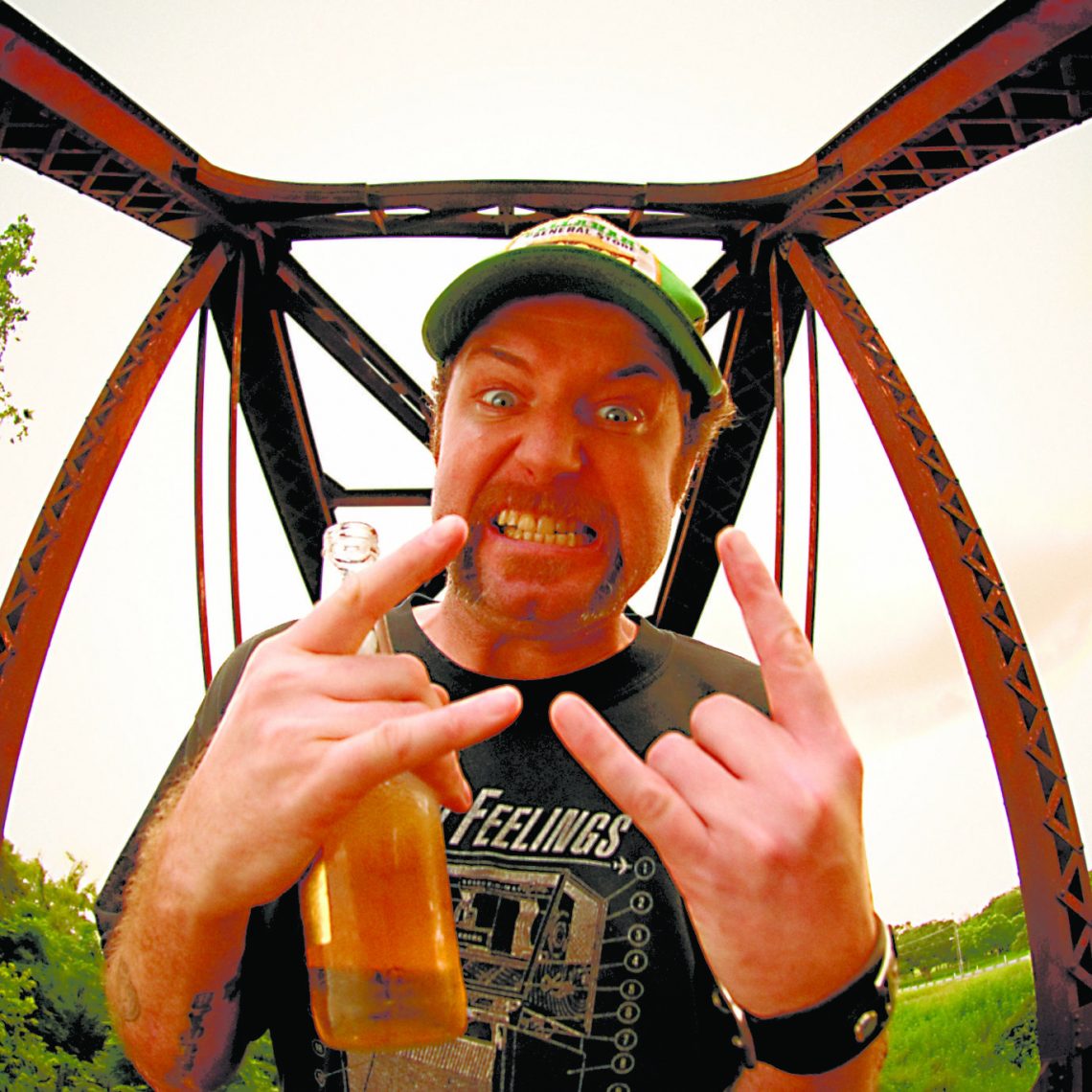 You’re not really from San Marcos,” maintains Scott H. Biram, “unless you know how to ‘bust a challow.’”

Biram, who was born up the road in Austin but graduated high school in San Marcos and spent a few years there as an art major in college, explains the rite of passage to me just before lunch — freshly removed from his headphones and a six-week European tour.

“You jump out of a tree into the water and you scrunch up real tiny in a ball, and right as you hit the river, you stretch out,” he says. “It looks like you’re going to do a belly flop, but it’s a shallow dive.”

When Biram was growing up, he busted many a “challow” in the San Marcos River. And in the years since, he’s made quite a splash in the music world, too — touring both nationally and internationally, releasing eight albums, and landing several songs in films, commercials, and TV shows, including Sons of Anarchy and Dog the Bounty Hunter. The 38-year-old, self-proclaimed “Dirty Old One Man Band,” who recently opened for Social Distortion in Hollywood, also won last year’s Independent Music Award for Best Blues Record (for 2011’s Bad Ingredients). That honor led to his invitation to play at the Lincoln Center in New York this March on his way back across the Atlantic for another round of dates in the U.K. and Ireland.

Biram released his first five CDs — 2000’s This is Kingsbury?, 2002’s Preachin’ & Hollerin’, 2003’s Rehabilitation Blues EP and Lo:Fi Mojo, and 2004’s The Dirty Old One Man Band — on his own label, the appropriately hard-hitting sounding KnuckleSandwich Records. But one day while on tour with Joe Buck (of the Legendary Shackshakers), the two paid a visit to the Chicago offices of Buck’s label, the insurgent country powerhouse Bloodshot Records.

Biram, proud independent that he’s always been, admits that he really didn’t want to be on any label other than his own. “I was doing fine by myself,” he says. “But I needed a booking agent, and that would get me worldwide distribution, so we signed a five record deal.”

Strictly speaking, Biram doesn’t exactly play “metal” (let alone is he a “band”) — but pigeonholing him as rock, blues, or any kind of alt-country doesn’t quite cut it either. Biram is a one-man tour-de-force of stomping, storming, blistering punk-laced blues mingled with raw country and rock. Both live and on record, his music pummels you with a savage, feral force that you can feel right down to your bones.

And the artist himself is every bit as tough as his music. On March 24, 2003, Biram was on the losing end of a horrific highway collision with a big-rig truck. Some four weeks later, he was back onstage: in a wheelchair, hooked up to an IV and with metal rods and pins holding his broken limbs together and various internal organs still on the painful mend, but nevertheless, rockin’ and stomping.

A decade later, Biram still has metal in his bones (and a one-foot shorter intestine), but he’s back on his feet and performing at full strength. “I’m walking, I’m happy,” he says matter of factly on the subject of his post-accident recovery. “And I can still play.” In fact, Biram plays an average of 200 dates a year. Most of those shows are outside of Texas — and many are outside of the country — but he still plays old San Marcos area haunts like the Triple Crown and Riley’s Tavern in nearby Hunter when he’s back home in Austin.

Biram more than holds his own as a solo artist these days, but he hasn’t always gone it alone. “I was in a punk band, a bluegrass band, and we played rock clubs,” he recalls. “But I also did a solo thing on the side doing Dylan and Doc and Townes covers. I had a regular gig at Gruene Hall in the front room, and I stomped on that wood floor, and I liked the way it sounded. I wanted to amplify it, so I started stomping on the mic stand.”

When the bands he’d been in broke up and his solo-thing-on-the-side became his main gig, he kicked things up another notch.

“I didn’t want to end up in restaurants and shit like that,” he explains. “I still wanted to play in rock clubs, so I had to soup it up. I built this footboard with subwoofers and a wall of speakers behind me.”

Throw in a lot of different guitars (including his favorite, a ’59 hollow-body that he’s been lovingly beating the hell out of for years) and, as he puts it, “all sorts of music,” and the possibilities are just about endless.

“I don’t have to choose what type of music I want to play as a one-man band,” he says with pride. “I can play whatever I want to.”