Six Market Blvd.: “Shake It Down” 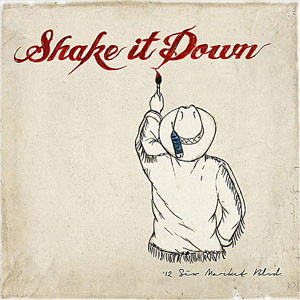 At the risk of downplaying Six Market Blvd.’s creative spark, they sound like they’ve got one hell of a record collection between them. There’s an admirable if restless gift at work here, sifting through them — no doubt with a slightly buzzed collective grin — and using their road-honed chops (the band has been a barnstorming presence in most of the state’s better small venues since the release of their 2010 debut, Running On Seven) to translate the elements of their influences into something fresh, vital and easy to dig. There’s a heavy dose of the melancholy cool of Ryan Adams’ more countrified efforts, and frontman Clayton Landau’s sweetly languid twang adds to that impression, but there’s also some strong strains of ’70s arena rock (the invigorating opener “Say It!” makes for a memorable shot-and-a-chaser sequence followed up with the brisk, Allman Brothers-esque “White Goose”), woozy cosmic-cowboy era balladry (bassist Ben Hussey’s “Santa Fe Train,” the lovely Tex-Mex waltz “The Painter”), even a couple of unabashed love songs (the jangly charmer “Stand” is among the album’s standout tracks, and “In the Name of Us” drifts into soft-rock territory, sax solo and all, without killing the vibe). There’s a tumbling fluency to Josh Serrato’s lead guitar playing that sounds good in just about any light the band chooses to cast it in, suitably smoking when the situation calls for it but artfully restrained when texture trumps pyrotechnics and the lyrics need room to breathe. The lyrics rarely dazzle as much as the delivery over the album’s 13-track sprawl, but they also steer clear of empty bluster or weary clichés. Now a band with two solid records under its belt, Six Market Blvd. does right by their influences then does them one better by making it all sound brand new. — MIKE ETHAN MESSICK