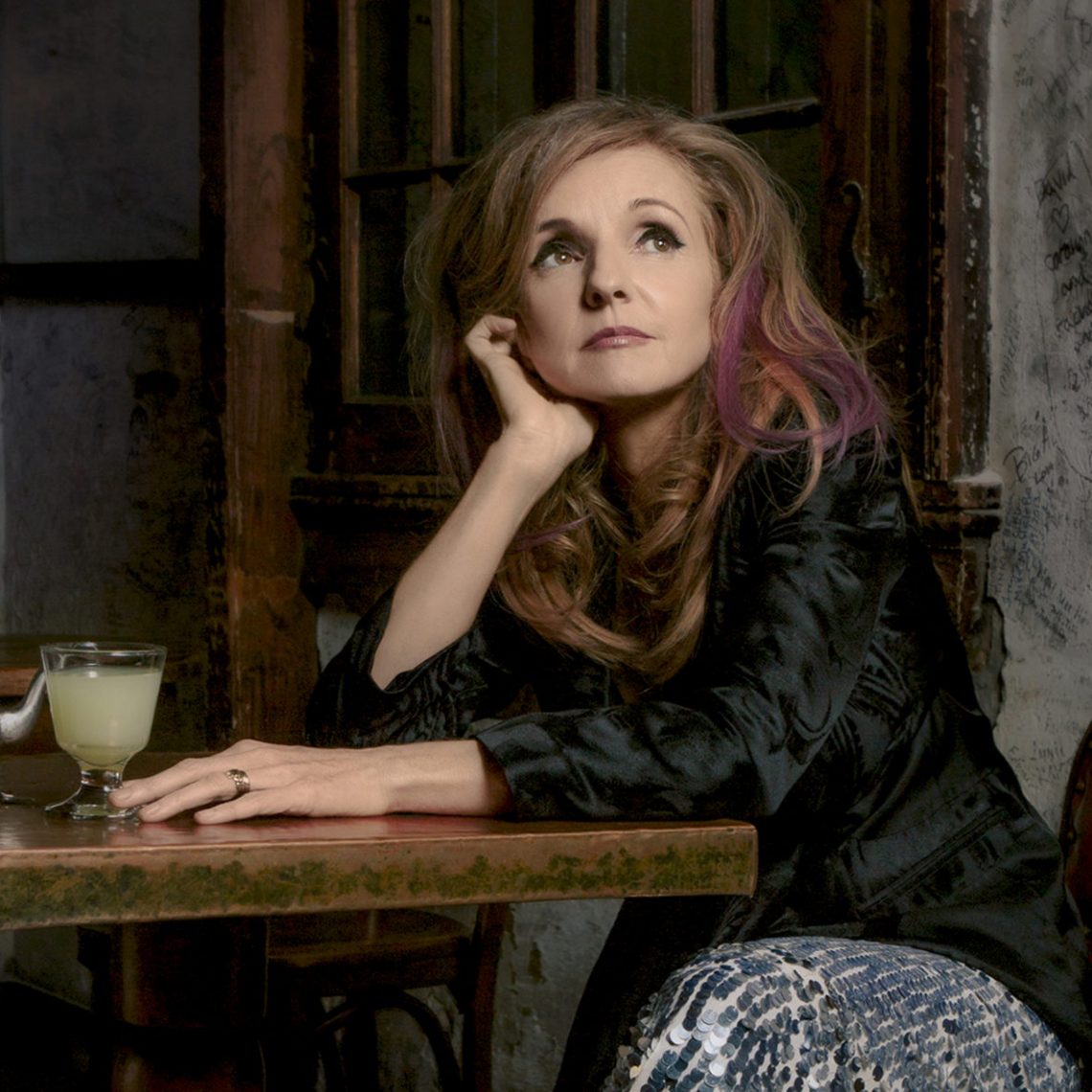 “James Baldwin always said there’s this love versus safety thing. Everybody wants love, but they go for safety,” muses Patty Griffin, knee deep in a conversation about her bold new album, Servant of Love. “As a society, we turn away from real life all the time to keep our safety — and it’s unreal. But, that’s where we go, even though it’s not what we want — or need.”

She pauses for a moment, then sighs the sigh of someone who’s been thinking about these things quite a bit. Having released albums that challenged expectation, made hard lefts against expectation — from the stark Living with Ghosts to the rocking Flaming Red and the firebrand gospel of Downtown Church to the streamlined folk roots of American Kid — she recognizes it is the path less taken that is where the rewards and fulfillment lie.

“The mass industrial life culture doesn’t have a willingness to embrace what’s in front of them,” she continues. “It’s not go out and party and have sex every night. It’s really look at the person next to you, really see them, take them in. To me, bravery means look your neighbor in the eye — because they’re right there, they’re part of your world. Now that stuff is not safe because it’s intimate and it creates connection.”

If the digression had started over Baldwin’s Blues for Charlie, Griffin could as easily be talking about the overt intimacy of her latest album. Recorded in 10 days with good friend and producer Craig Ross in Austin, Servant is a triumph of passion’s consumptive power, the fragility of love and the reality of our strength, conviction and raw emotions. 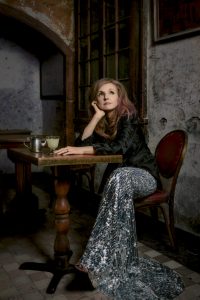 Opening with a stark rolling piano and echoing vocal — eventually marked by the occasional arpeggiated trumpet lines that bleed across the track — “Servant of Love” suggests the depths of desire and the smallness of people against the waves of those emotions. Evoking Kate Bush and PJ Harvey at their most naked, Griffin’s doorway into the project suggests this will be full frontal truth.

But — in spite of the quiet uncoupling with Band of Joy bandmate Robert Plant — this is not Griffin’s Blue. Instead, there’s the brazen burlesque of “Gunpowder,” the throbbing moan of “Good and Gone,” and the slinking own-the-pain/resolve-to-heal blues of “Hurt a Little While.”

Over the course of 13 songs, the Maine born songstress — who has seen her songs covered by the Dixie Chicks, Emmylou Harris, Solomon Burke, Kelly Clarkson and Miranda Lambert — immerses not only in the euphoria of surrender on “Rider of Days,” but the raw ache of the Bonnie Raitt’s early Give It Up torch blues “Noble Ground,” before offering the utter sexual flex “Snakecharmer” and finally emerging richer for all of it in “Shine a Different Way.”

It’s vastness is exhilarating for the ground covered and for Griffin’s voice — always a formidable channel — finding even deeper veins of emotion to tap. In many ways, it started when Griffin, who rarely listens to her older records, needed to approve the new mixes of “the lost” Silver Bell.

“There were a lot of colors on that record, and I realized I loved all those colors,” she explains. “Hearing that, I found I’d get into a tuning I don’t use — or use it in a new way. Things shifted a little; I started to play the piano every day, I’d let the lyrics come and maybe leave them. I felt like… I didn’t really know about all of it. I felt pretty much in the dark, except I knew I wanted to work with Craig for over a year.”

Using the producer as a sounding board, the slight woman with the wild tangle of mahogany hair would check in and play him what she was writing from time to time. “I wanted him to have a sense of the songs, and to see if I was crazy.”

If she let her writing be freer, she also retreated to a few touchstone albums: Nina Simone’s Nina Sings The Blues, Leonard Cohen’s 10 Songs from a Room and Morphine’s A Cure for the Pain. Marked by a decided immediacy and intimacy, don’t read their lean production as Griffin’s desire to quiet things down.

“They all kept it so simple, but so direct.”

Coming into her own as a singer-songwriter in New England, Griffin saw both Morphine and their precursor Treat Her Right quite a bit around Boston. It set a notion about connection with the listener all those years ago. “You’d see them onstage, and you didn’t believe how good it is there right in front of you — because they were a band that gave more back every time. They were kind of rocking, and they weren’t loud, but they got inside you.

“To me, rocking is performance… rocking is heart,” she explains, zeroing in on what makes music combustible. “To me, Leonard Cohen is rocking because of the vulnerability, (his) being out there and in your face with how it is. Nina Simone even more so. All those artists own it. They do their own thing — just put it out there, and they don’t care how it lands because it’s their reality.”

The more Griffin and Ross talked, the more streamlined their plan became. Try to get a song, maybe two a day. Occasionally, they’d get three. “Even in the recording I wasn’t sure,” she says. “I thought it was going well, but you never know. I know I really appreciate the players even more — maybe because we were going in to capture the performances. We just plowed through; I thought we’d be able to get (the essential emotions). Craig and I had met up over the course of the year, especially during the writing, so I feel he really understood.

“You really don’t until it’s done and you’re listening back.”

Whether the slight woman with a voice that can burn like a cigarette applied straight to flesh or sparkle like sun on a calm lake was looking to break ground doesn’t matter. Her intentions were more to being true to the moments, and let happen what would happen.

“I think it becomes easier to have less fear and no fear,” she concedes. “It’s one of the things about getting older. There’s lots of things to not like, but there’s a freedom, too. I don’t care anymore whether people like me or not. I used to really care, but you know some people may not like this music, and it doesn’t matter.

Again Griffin pauses, weighing her words to make sure what is intentional doesn’t come off as cavalier. If moments hold purity unto themselves, she measures her realizations to get what she shares with others right.

“There are some basic laws of living,” she picks up. “We’re all gonna die. You get older, you see the wrinkles. You look in the mirror and you realize, ‘This is happening.’ If you see that, the perspective is pretty obvious.”

Still, for the loss and the reality of life beyond the party marketers sell an America in denial about the major issues, Griffin isn’t about doom, gloom or the imploding on the inevitable end of our living.

“If you spend time with someone who’s passing away, it’s miserable and it hurts. But there’s no place you’d rather be… and that’s what I’m talking about. We don’t have a choice: we’re all part of this play and we’re all creatures and exist. Evil may be, but mostly I think people want to live life and to go on …

“I always go back to the weeds coming up from the cracks in the pavement of the parking lot,” she says. “They won’t be stopped. Beauty keeps trying. There’s something in us that seeing a child, you smile. You can call it a scientific chemical reaction or whatever you want. But really, it’s love. We have no control over it, but it’s out birthrate. It’s inside us, and it can’t be denied.”