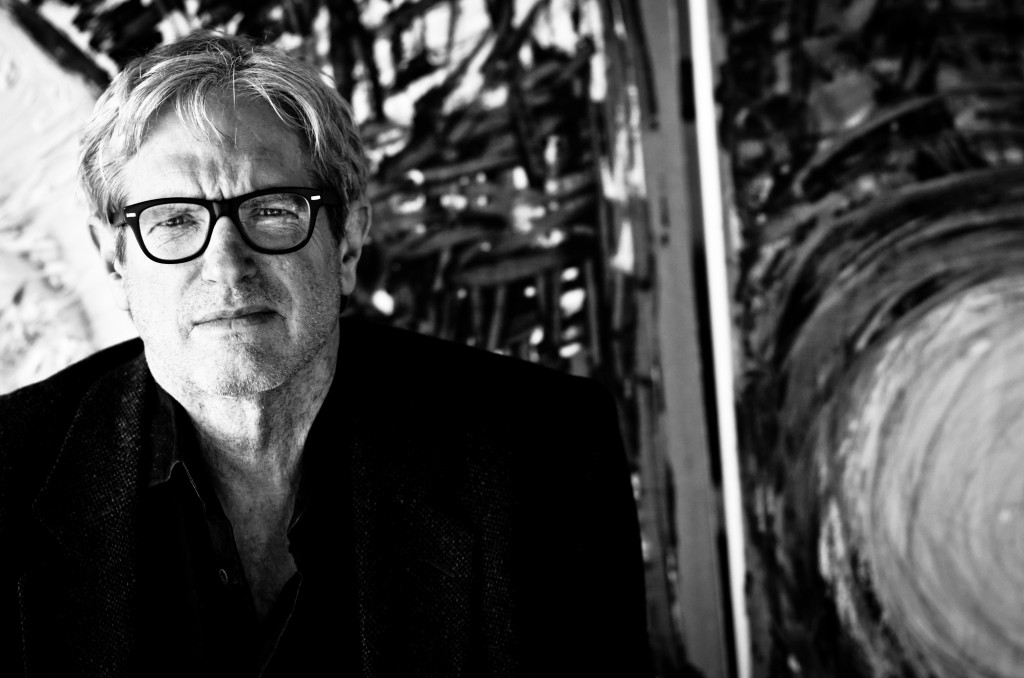 Sam Baker’s new album is entitled Say Grace. When asked what he’s grateful for, Baker names just one thing: “Everything.”

Coming from some, the answer might seem trite, even contrived. But those familiar with Baker — his songs, his art, his story — will grasp the sincerity and seriousness of his response. This is a man who really does have a lot to be grateful for. As esteemed producer and musician Gurf Morlix says, “Sam is the only guy I know who has died and lived to tell about it.”

Sam “tells about it” in his song “Steel” (from 2004’s Mercy). The song starts and ends at the same place — a train going nowhere: “Sitting on the train to Macchu Picchu/The passenger car explodes.” 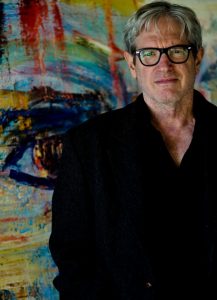 Baker was aboard that passenger car in Peru. He sat talking with a blue-eyed German boy and his parents, waiting for the train to leave the station, when a bomb planted by terrorists in the luggage compartment overhead exploded. Seven passengers on that car, including the German couple and their son, died. Baker himself was dying. The explosion severed the femoral artery in his leg, blew in his ears, and maimed his shoulders, arms, hands, and fingers.

The song “Broken Fingers” on his second album, 2007’s Pretty World, opens with the question, “How long?” The chorus provides a response: “Some things don’t heal.” Baker won’t ever forget the blue eyes of the German boy who died in the blast and is commemorated in the song, but in the nearly 30 years since the incident, he has learned to accept the healing graces of time, art, and, last but not least, gratitude.

Baker calls gratitude a “miraculous healing device,” but continues, “Before gratitude, I had to find acceptance — acceptance for what is lost, and for what is. Art has had a role in that.”

The bomb left Baker with a lot not only to accept, but to endure: the surgeries, the therapy, relearning to use his broken body. But through it all, he’s come to recognize suffering as a “great teacher.” Before Peru, he’d join friends to play cover songs with a right-handed guitar. The accident shattered his left hand so badly, he had to teach himself to play guitar left-handed, fretting with his right hand. And that was the easy part. Years after the accident, he struggled with the concept of being an artist, finding his voice, and controlling “the channel.”

“What I have to remember is that by default, the channel is open. I’m the one who closes it,” he explains.

But closing it can sometimes be a necessity. “There are some people who get such a big dose of it they struggle with everything else,” he says. “You can sometimes try to hold your hands up to shield a little bit, but it’ll burn right through your hands. If you can’t do it, you start using pills or booze, and that works — until it doesn’t.”

His struggles have spawned four albums: Mercy, Pretty World, Cotton (2009), and now Say Grace. An exquisite sparseness unifies the art and production of the first three albums, which Baker refers to as “the trilogy.” The album covers are mostly white space, with a single black and white photograph, taken by Baker himself, at their center. By contrast, the production and art for Say Grace is fuller: the black and white photo takes up the entirety of the cover, and more instruments fill out the spaces in and between songs. But the results are no less distinctive.

Morlix, whose inimitable bass and electric guitar riffs are featured on the new album, describes Baker’s songs as pure and timeless. “Some of those songs sound like they could have been written a 100 years ago,” he marvels. “Or 500 years ago.”

Morlix has been hooked on Baker’s songs from the first one he ever heard, “Waves,” the opening track on Mercy. “‘Waves’ is just the perfect song,” he enthuses. A friend played it for him after the album came out, then started to put on another CD after the track finished. “I said, ‘No, no, no! Take that off — put Sam back on!” Morlix recalls. “I didn’t want to hear anybody else after that.”

Baker’s songs have the unique quality of seeming immediately familiar, yet unlike anything you’ve ever heard before. Like a post-modern artist creating a singular masterpiece out of a mess of discarded objects, he weaves fragments of aging hymns, prayers and poems into the new stories of his songs. For instance, on Say Grace, the medieval folk tune “Picardy” infuses the melody of “The Tattooed Woman,” while the opening line of a child’s prayer (“Now I lay me down to sleep”) creeps into its final verse. The unfamiliar becomes familiar, and vice versa.

This technique lends his writing literary and cultural flair, and yet, even with references to the likes of William Butler Yeats and Emily Dickinson, the songs are anything but highbrow. According to Baker, the Say Grace song “Road Crew,” with its reference to Dickinson’s “sweeping up the heart,” could be called “Emily and the Used and Rebuilt Parts.” It’s unlikely that Ms. Dickinson had a cleanup crew in mind when she penned the line, but the mismatch has the likable effect of making the maiden’s poem accessible while granting the street cleaners’ dirty jobs an air of grace.

The heroes of Baker’s songs are of the every-day sort: street sweepers, migrant workers, and ditch diggers. Though their circumstances and characteristics are discrete, their stories — tales of births and deaths, love and loneliness, faith and disillusionment — are universal, generating a fan base extending well beyond the borders of Baker’s native Texas.

“[Sam’s] songs feel distant and remote, yet close and familiar,” says Tomoko Ikeda, a Baker fan born and currently residing in Japan. “They take me to a faraway land, and at the same time, make me look deep inside myself.” She expresses wonderment at the ability of an artist with whom she shares so little in common in terms of culture, gender, and occupation, to write songs that touch her so deeply.

Baker’s songs also touched musician Carrie Elkin, whose harmonies grace the new album. “I immediately felt very connected to what Sam was doing, very moved by it,” she says. She wrote “Dear Sam” as a tribute and thank you to the friend who inspired it, and included it on her 2011 album, Call It My Garden, which was recorded at Baker’s house.

“You can go out and hear someone who is a perfect guitar player and perfect singer and perfect songwriter, but you leave the night feeling like you were never connected — even though all of those pieces were there,” Elkin explains. “Then there are nights when the imperfection is the beauty of the whole thing.”

The beautiful imperfections of Baker’s songs, and the characters that inhabit them, make them compelling. A protagonist in the Say Grace song “Isn’t Love Great” is a first grade teacher, described as a “beautiful woman/she walks with a limp.” In other words, she is perfectly imperfect — just like Baker. He’s a musician who barely hears out of one ear, plays guitar with a crushed-up hand, and sings without really singing, and yet, somehow it all works. The songs are more powerful for the humanity exposed by their imperfections. The flaws become gifts.

“I am in art because of Peru … but I struggled with it a while,” Baker admits. “I know so well what it’s like to have charred hands, but in the last couple of years, something has turned. I’m more at peace with the gifts I was given. For so long, I was so bitter about the things I had lost, it was hard to see … the gifts that were laid upon the table.”