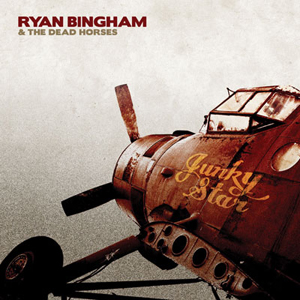 In rock ’n’ roll music (and let there be no mistaking it, Ryan Bingham & the Dead Horses are definitely a rock ’n’ roll entity), an artist’s third album is often the trickiest to nail. Sure, there’s the dreaded “sophomore slump” — but honestly, if you’re any good at all, it really shouldn’t be that hard to prove you’re not a one-trick pony following a successful debut. But album No. 3 is the one where you need to prove you possess the breadth of talent and material to go the distance in a long career, that you’re able to make music that remains compelling to your audience and challenging enough to keep you from becoming complacent. Done correctly (think After the Gold Rush, London Calling, and OK Computer), it’s that piece of the puzzle that transcends expectations and sets the stage for true artistic evolution. All of which explains why Bingham’s third national release, Junky Star, reminds this reviewer so much of Led Zeppelin III, which marked the passage of Zep from straightforward pounding blues-rock to a mystical, timeless rock enigma.

Warning: Those expecting Roadhouse Sun Part II can stop reading now. Those hoping for a Mescalito reprise can take a whiskey break. Not that Junky Star isn’t good — possibly even eclipsing Bingham’s previous work; it just takes some time to reveal the complexities that make it so. In the era of disposable music where the unfamiliar is frowned upon and tossed out of iPod rotation, some less patient listeners may be alienated at first listen. As with III, there are several acoustic tracks that play more on mood rather than energy (though fans of famed producer T Bone Burnett should expect nothing less), with the resulting feel that there may have been more than one finalist in the running for the theme song to Crazy Heart. In fact, the eerie, haunting opener, “The Poet,” could very well be the musical/lyrical cousin of Bingham and Burnett’s Oscar-winning “The Weary Kind,” describing a place “where the coyotes are callin’/the stars keep on fallin’/your mother/she won’t be around” enclosed by a soundscape that expresses only a lonesome desolation.

The pace does pick a couple of songs later with “Strange Feelin’ in the Air,” a scorching rocker (Junky Star’s “Bron-Y-Aur Stomp?”) whose last 45 seconds are best heard with the volume knob turned up to 11. But just when you expect “Depression” — perhaps the most accessible track on the album — to break into a frenzied rock-out of its own, it instead gently folds itself back under layers of gorgeous picking and percussion. As much as “That’s the Way” brought a completely unexpected sense of the whimsical to Led Zep III, “Depression” here shows a newly restrained Dead Horses. And, despite its title and lyrics like “I’d rather lay down in a pine box/than sell my heart to a fucking wasteland,” “Depression” is actually one of the few songs on the album that at least hints at optimism. It’s followed by “Hallelujah,” an absolutely devastating song on every level unlike anything else in the Bingham catalog. Fittingly, it’s sequenced as the centerpiece of Junky Star, though it might have been better to save it for the end — if only because everything that comes after it on the album feels rather anticlimactic in its shadow. But give the rest of those songs enough time, and they all reveal their own willfully subtle charms.

Unlike Mescalito and Roadhouse Sun, Junky Star is not exactly an immediate album. It strives to drive you away, to unsettle your nerves. But it may very well be the one I retreat to most in the coming years — not because it goes well with a party, but because it’s a deep, fascinating album that begs to be revisited and absorbed further. Like III, I suspect this may be the record we eventually realize we always hoped Bingham and the Dead Horses would make. — ZACH JENNINGS