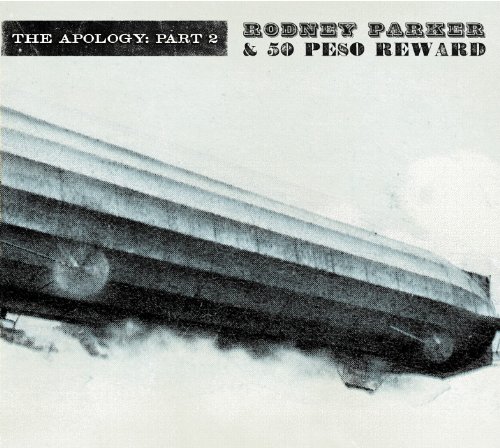 Hanging out on the fringe of a fringe, more the logical heirs to the punk-tinged Denton alt-country legacy of the Old 97’s than just another Texas country bar band, Rodney Parker & 50 Peso Reward have been a mite stingy with the quantity of their output. Never the quality, though: 2008’s semi-breakthrough The Lonesome Dirge sounded like Cormac McCarthy had slipped into the writing room, and had a sonic kick to match. They took their time following up with the first EP installment of The Apology back in 2011, mixing a little welcome romance into their worldview without losing their edge. With The Apology Part 2 (for convenient catch-up’s sake, Part 1 is tacked onto the CD release of the sequel), there’s yet another incremental shift into radio-friendly, ear-grabbing, brightly rollicking numbers about falling in and out of love. Parker’s voice, reminiscent of Jay Farrar spiked with a shade of Eddie Vedder, remains a mighty anchor for the band’s sentiments: they might have lightened up a bit, but they’ve done so without dumbing it down. In between the hooks of top-down numbers like “I Thought Your Eyes Were Blue” and “Things You Make Me Do,” there’s a wealth of slyly poetic hints at the band’s surroundings, travels, and ambitions (“I’m building towers just to see if they lean …”).  Add in the punchy “Tongue Tied,” the freight-train chug of “I Apologize,” and the empathetic extended metaphor of “The Corner,” and Parker and the Pesos get more done in five tracks than a lot of bands ever manage in 10. — MIKE ETHAN MESSICK