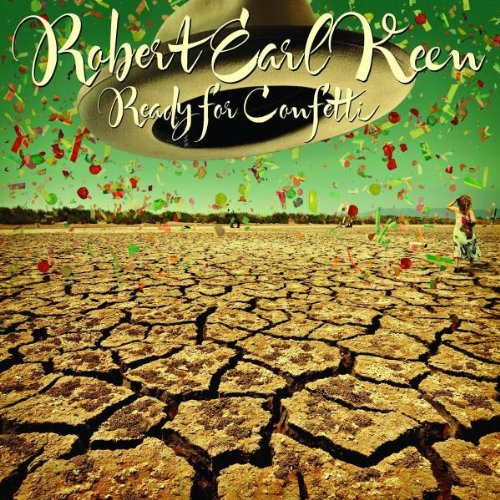 Sitting down to review Robert Earl Keen’s latest, I asked a colleague via instant message if he’d received or had a chance to listen to his own advance copy of the album. “Not yet,” he replied, “but I hear it’s all Caribbean-ed out.” Ouch. For Keen’s sake, let’s nip that one right in the bud: Contrary to whatever misinformation might be floating around out there, Ready for Confetti is decidedly not Keen’s Caribbean folly — even though the breezy, featherweight title track could, I suppose, conceivably give off that impression. A hey-what-the-hell-let’s-join-’em celebration of life’s most carefree, presumably crazy spirits, “Ready for Confetti” is possibly Keen’s most out-there song to date, surpassing even the psychedelic title track to 2003’s Farm Fresh Onions.

“Ready for Confetti” — the song — will probably prove a tough jellybean for some Keen fans to swallow (and you can pretty much count on them to bitch endlessly via anonymous Web posts). But just like any of the song’s colorful misfits, all dancing to the beat of their own drums in this “wigged-out, weird-out, wild and wacky world,” Keen has never been the kind of artist to adhere to anyone’s expectations in regards to his music but his own — whether it’s playing whatever he dang well pleases rather than answering every drunken request for one of his rowdier hits, or even, say, sticking a head-scratcher like “10,000 Chinese Walk Into a Bar” in the middle of his last album, 2009’s The Rose Hotel. His more idiosyncratic choices may not always make sense, and not everything he throws at the wall sticks, but anyone really caught off guard by his musical curveballs just hasn’t been paying close enough attention.

Ready for Confetti may have its share of such eccentricities, but like all of his best records, it rewards those who come to a Keen party ready for anything. Because along with the title track, the equally bonkers “Who Do Man” and the playful Hollywood celebrity send-up “Top Down” (which cruises along with the chilled-out vibe of an Hawaiian luau), it also features such primo additions to Keen’s songbook as the surrealistic spaghetti-Western opener, “Black Baldy Stallion,” the snappy, restless “I Gotta Go,” the reflective “Lay Down My Brother” and “Waves on the Ocean” and the golden-hearted “Show the World.” And if it’s bite you’re looking for, check out “The Road Goes On and On,” which is both a sly, self-aware nod to the albatross of his own biggest hit (you know the one) and a gloves-off smack down to a flashy would-be challenger who’s apparently lost the plot. He doesn’t outright name names, but have fun guessing: “How in the hell do you think you’ll make it/when the real test comes and you just can’t fake it?/Your sycophants say they can’t take it/and leave you on your own.” Ouch.

Actually, that bitter pill may be even tougher for some listeners to choke down than the confetti. But Keen balances it all out on the backend with two of his finest recordings yet: a sterling new version of his own “Paint the Town Beige” (first heard on his classic 1996 set, A Bigger Piece of Sky), and a terrific pass at Todd Snider’s “Train Song” that’s every bit as good as his outstanding cover of Townes Van Zandt’s “Flying Shoes” on his last album. Cap it all with a sincerely moving take on the traditional gospel tune “Soul of a Man,” long a staple of his live shows but never captured in the studio, and Ready for Confetti proves, not for the first time, that Keen’s instincts hit the mark a lot more often than not. — RICHARD SKANSE