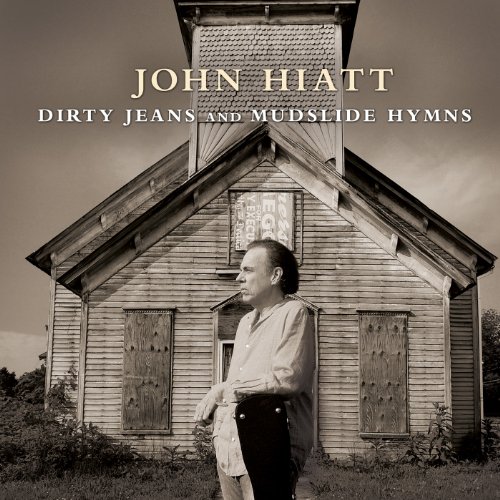 The press blurb for John Hiatt’s current tour with Lyle Lovett refers to Hiatt as an 11-time Grammy nominee. There’s something gravely wrong with that sentence, though. It should read, “11-time Grammy winner.” The fact that Hiatt has never received his industry’s highest accolade is a travesty; you’d think by his 20th solo album, they’d have remedied that oversight. It’s not that others do his songs better than he does (though plenty have had bigger hits with them). It’s more likely the Dylan/Earle/Springsteen thing; land in a category with one of those cats, and your odds nosedive.

But Dirty Jeans and Mudslide Hymns probably won’t change Hiatt’s Grammy (mis)fortunes. Full of his usual mix of twang, blues, and soul ’n’ grit, it’s very listenable, even outstanding in parts, but it’s not a start-to-finish home-run. Hiatt’s heavenly falsetto, earthy swagger, low menace and high howls … they’re all here, along with some extra-fine keyboard and guitar, the latter shared with Doug Lancio (who also contributes mandolin and Hammertone octave 12-string; ex-Zappa sideman Patrick O’Hearn is on bass and Kenneth Blevins handles drums and percussion). But they’re not always quite as forward as they should be; Kevin Shirley’s production seems to be a bit off in parts.

Still, you can’t deny the irresistible, hip-twisting melody of “I Love that Girl”; it’s the “My Baby Blue” of this album. (That cut, from Beneath This Gruff Exterior, is one of his many underrated tunes.) And lord help you if you can’t sing, because you won’t be able to stop yourself when the chorus rolls around. It’s so darned sweet, and when he quotes Sam Cooke at the end, you just wanna give him a hug. Its soulful flip-side is “Don’t Wanna Leave You Now,” in which Hiatt climbs from a growl to those plaintive high notes as he swears his love. “I kinda think you see right through me/I got no clothes on when you look into my soul,” he sings. If Ray Charles were alive, he’d be all over this romantic diamond. Elsewhere, though, “Damn This Town” sounds like a slowed-down “Perfectly Good Guitar” and “Detroit Made” seems like a toss-on. And the dramatic “Hold On For Your Love” sounds as if it’ll be killer live, but it plods somewhat here.

That song’s followed by another knockout, though. “Train to Birmingham” is the kind of work most songwriters dream of creating, full of “mudslide” guitar and lines like, “I got holes in both my shoes and a guitar full of blues/A one-way ticket for my remedy” and “I never get to Birmingham/Aw, but getting’ there’s not the plan/I just like the feel of goin’ home.” Then comes the punch of the chorus: “And I lie when I have to and I cry when I can/But I die a little slower on the train to Birmingham.” The album’s majestic finish, “When New York Had Her Heart Broke,” further reinforces the sense that, even though Dirty Jeans and Mudslide Hymns may not rate five stars, it’s definitely got moments worth worshipping. — LYNNE MARGOLIS