Ray Wylie Hubbard: “Tell the Devil I’m Gettin’ There As Fast As I Can” 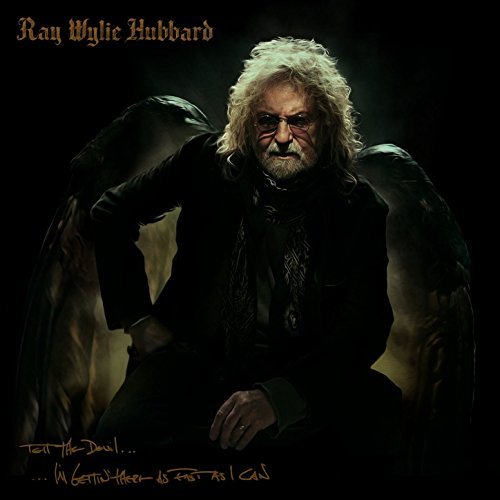 Ray Wylie Hubbard fills a pretty singular spot in the lineage of Texas’ country/folk/roots music: a legend and influence to many, yes, but more so than anyone he’s down in the gigging and songwriting mix with the relative youngsters that admire and emulate him. Others of his more-or-less generation might have been removed from the fold by premature passings (Townes Van Zandt, Doug Sahm) or longtime residences outside their Lone Star home (Guy Clark, Steve Earle), but Hubbard has made the most out of the long ongoing second act of his life and career. He’s writing songs and trading licks onstage with some of the brightest young artists to arise in his wake, and he’s been among the most prolific and consistent modern songwriters of any age or genre. So at least every couple of years we get another helping of Hubbard’s gritty imagination and philosophical soul.

Tell the Devil I’m Gettin’ There as Fast as I Can (we’ll just call it Tell the Devil from here on out … I’m not getting paid by the word here) is as satisfying as any of his recent albums, and comes at you even more undiluted than usual. Despite his aforementioned knack for collaborative songwriting, these are all solo-credit originals, and it shows (Hubbard also self-produced). Hubbard’s a bit of a self-mythologizer, sure, but from such a tongue-in-cheek angle that it doesn’t grate. These songs are shot through with his personality, philosophy, and history; equal parts swagger and shrug, he’ll conjure himself up some hoodoo powers on “Dead Thumb King” or craft a four-minute frontier tragedy on “House of the White Rose Bouquet” but then turn around and spit lowdown one-liners and what-the-hell howls on “Old Wolf.” “Open G” is literally an audio guitar lesson, which might sound like filler in lesser hands but with Hubbard you really get the sense that he wants you to tune that guitar up and pick along with him. The tradition matters more to him than his own mythology.

As mentioned, there’s no songwriting collaboration this time around, but some uniquely erratic cohorts are on board nonetheless. Mainstream country star Eric Church — an ambitious-songwriting diamond in the rough among the current Top 40 — has gone on record (literally) as a big Hubbard fan, and he lends a little marquee-friendly background vocal juice to the title track alongside alt-country queen Lucinda Williams. Patty Griffin lends considerable sweetness to the starkly beautiful closer “In Times of Cold,” an alchemic matchup to be grateful for. From considerably farther out of left field, Austin’s indie arena-rock jokesters Bright Light Social Hour pop up in full on “The Rebellious Sons”; they meet him more than halfway, no doubt, but it’s still a nice shot of rock ’n’ roll adrenaline on a record that leans towards spare.

Elsewhere, Hubbard leans mainly on his own guitar talents with some boosts from his son Lucas, mostly low-key percussion from Kyle Schneider, and occasional drop-ins from invaluable ringers like Jeff Plankenhorn and Bukka Allen. His usual lyrical obsessions remain in place — biblical import, road-worn guitar gear, the mythology of the blues and the devil’s pervasive mischief — but he’s a compelling enough songwriter to come at if from new angles. “God Looked Around” is about as straight-up of a retelling of the Book of Genesis as you’re likely to get this year; “Tell the Devil” gets into the specifics of what’s in the back of that alt-country Ford Econoline; “Spider Snaker and Little Sun” resurrects some near-forgotten blues legends; and “Lucifer and the Fallen Angels” road-trips with a liquor-store-robbing devil that’s only a shade more rambunctious than Terry Allen’s hitchhiking Jesus from “Gimme a Ride to Heaven.” As always, there’s some dark corners and deep moments here, lest anyone forget that Hubbard has never been one to shrink away from reckoning with the heavy stuff in song. But for all the gravity his experience and talent offers, there’s still a lot of serious fun lurking in those shadows, too — because that’s the way this Old Wolf rolls. — MIKE ETHAN MESSICK