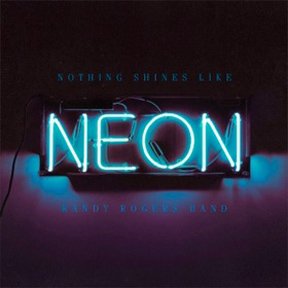 While it’d be a stretch to call the very (very) good Nothing Shines Like Neon an outright revelation, let alone any kind of landmark of its genre, let’s take a moment to try and assess it from a bigger-picture perspective that just the obvious “here’s another record from the Randy Rogers Band.” Including live albums, this is the group’s 10th album in 16 years — and frontman Rogers’ 11th, counting last year’s duo album with Wade Bowen, Hold My Beer Vol. 1. Although that might not seem like that long a run for Texas music fans old enough to remember back when guys like Jack Ingram and Pat Green were cocky young upstarts cribbing notes and stage cues from the likes of Jerry Jeff Walker, Joe Ely, and Robert Earl Keen, consider this: the RRB has now been making records for longer than Keen had been when Green crashed the party with 1995’s Dancehall Dreamer — and even longer than Townes Van Zandt and Guy Clark had been at it when Keen himself was the new kid on the block. Hell, Rogers and the rest of his namesake band — fiddle player Brady Black, guitarist Geoffrey Hill, bassist Johnny “Chops” Richardson, and drummer Les Lawless, all still in their 30s — have now been the de facto kings of the Texas Country hill for so long that they’ve already spawned their own share of upstart imitators, with frontrunners the Josh Abbott Band threatening to close the distance stride by stride. With that kind of heat at his back, is it any wonder why Rogers has seemed so prolific of late, with Neon being his fourth release in as many years?

The funny thing is, though, Nothing Shines Like Neon really doesn’t sound anything at all like the work of a band or artist pulling out all the stops in a concerted effort to stay on top — at least not quite as overtly as Pat Green’s Home, an earnest comeback bid that overplayed its mea culpa to the Texas fanbase, or even the RRB’s own last studio album, 2013’s Trouble, with its somewhat edgier Jay Joyce production and heady guest list (Ray Wylie Hubbard, Willie Nelson, Mickey Raphael, Gary Allan). Although Neon brings in its own cast of ringers (Jerry Jeff Walker, Jamey Johnson, Alison Krauss, and Dan Tyminski, not to mention Willie/Kenny Chesney producer Buddy Cannon), the core band itself frankly hasn’t sounded this comfortable in its own skin since its 2004 breakthrough, Rollercoaster. The key difference this time around, though, is that rather than swagger and charge full-tilt like scrappy whippersnappers gunning for the sweet spot between Steve Earle’s “Guitar Town” and “Copperhead Road,” here they display a more mature, disarmingly laid-back sense of confidence by consciously easing off the roots-rock pedal and aiming straight for George Strait country. And boy, do they ever sound right at home when they get there. Although they’ve certainly proven their festival mettle over the years with crowd-pleasing anthems aplenty and a show-stealing fiddle player loved by fans like a guitar hero, the fact is that the RRB has never been quite as convincingly assertive as flat-out country rockers as Reckless Kelly or whatever Red Dirt juggernaut Cody Canada happens to be driving on the same bill. But give Rogers and Co. the leisure to relax a little, and you really get a sense of how damn good this band truly is.

Nothing Shines Like Neon isn’t quite the classic-country throwback that Jason Eady’s acclaimed A.M. Country Heaven was; nor does it encroach on Jason Boland and the Stragglers’ Waylon-style Outlaw turf. But it is unabashedly country as all get-out, and hooky as hell, too — albeit in a way that just feels natural rather than forced or calculated. The welcome restraint is apparent right from the start with Keith Gattis’ “San Antone,” a home-from-the-road song that eases its way into the heart of the Alamo City at the speed of a Sunday drive out to Luckenbach, with the first notes from Black’s fiddle sounding like a car window being rolled down to let in the sweet Hill Country air. The following “Rain and the Radio,” the first of two Rogers co-writes with Sean McConnell, opens with a teasingly funky little organ lick by session ace Randy McCormick and locks right into a simmering, Delbert McClinton-style rhythm ’n’ groove, only to be swept off the ground with one of the most soulful choruses Rogers has ever sung. And it only gets better from there. The achingly exquisite “Neon Blues” is, to this reviewer anyway, the best song Rogers has ever co-written or recorded, with “Tequila Eyes” (co-written with Cannon and Dean “The Chair” Dillon) a very close second. But “Meet Me Tonight,” “Old New Moon,” and “Actin’ Crazy” (a co-write and duet with Jamey Johnson) are all solid contenders, too, and out of the three other songs (after “San Antone”) that Rogers didn’t have a hand in writing at all, only “Takin’ It As It Comes” feels noticeably out of place. Although the rowdy Jerry Jeff cover (actually penned by his ex-guitarist Bobby Rambo) gives the band a chance to cut loose and play Gonzo, having old “Scamp” Walker himself along for the romp doesn’t leave Rogers much room to make the song his own.

Fortunately, he has no such issue getting to the heart of “Look Out Yonder,” the Earl Bud Lee song that Rogers said he kept on hold for years before finally being moved to record it in loving memory of Cheatham Street Warehouse founder Kent Finlay, who died in early 2015. While at first it might seem odd that Rogers would choose to honor his late friend and songwriting mentor — the same man who helped launch the career of Rogers’ hero George Strait 25 years earlier — with a song he didn’t write himself, both the sentiment and performance ring as right and true as Krauss and Tyminski’s heavenly harmonies. Because out of all the sage wisdom that Finlay ever shared with young artists in his lifetime, the most important lesson of all was to listen up and know how to spot a great song. “Look Out Yonder” is proof that Rogers is still paying attention. — RICHARD SKANSE