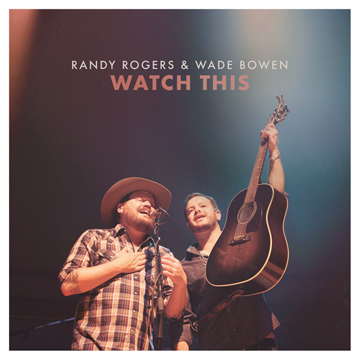 From Willie and Waylon to Jack, Charlie and Pat, every generation of Texas country music has had its own “one-name” stars, and if any two guys on today’s scene have earned that distinction, it’s Randy (Rogers) and Wade (Bowen). Both artists have spent the better part of the last 15 years establishing themselves as top-draw talents on the scene, and their occasional teaming as a country duo has, not surprisingly, yielded particularly fan-pleasing results. After touring under the playful “Hold My Beer and Watch This” banner for over a decade, they finally got around to recording and releasing their first album together, last year’s classic-country adoring Hold My Beer, Vol. 1. The funny thing about that record, though, was that it was originally supposed to be a live album: it wasn’t until after they casually laid down a couple of new songs with Lloyd Maines at the production helm that they ended up changing course and recording a full-blown studio album of brand new material. The results were killer, but thankfully Randy and Wade didn’t wait too long before coming back around to the live album idea, because for these guys, there’s really no better recording studio than a packed concert venue or dancehall with nothing to work with but a pair of guitars and a ton of good humor and shared respect for each other’s songs. And if the new Watch This — comprised of 19 live acoustic recordings taken from shows at the House of Blues in Dallas and Cheatham Street Warehouse in San Marcos — feels like a victory lap, it’s as welcome and enjoyable as it is hard earned.

The camaraderie between the two is evident every time they share the stage, and it comes across in spades here: The banter is natural and funny, especially when it comes to the rambunctious Rogers taking a few humorous jabs at the more reserved Bowen — or Rogers calls him, the “prima donna.” Including “Whataburger,” an in-between song snippet where Bowen sings about Whataburger ketchup and the two chat about the beloved condiment, gives the album the living-room vibe these shows have become well known for. And although there aren’t any “new” songs to be heard here (nothing, for example, from the Randy Rogers Band’s recent Nothing Shines Like Neon album), even the most familiar tunes in the set sound fresh and new in this context. Slower numbers such as Bowen’s “West Texas Rain,” “Mood Ring,” and “One Step Closer,” as well as Rogers’ “Tonight’s Not the Night” and “She’s Gonna Run,” match the closed-eye, lover-holding intimacy of the studio originals. But the faster, more rocking numbers — like “Fuzzy,” “Buy Myself a Chance” and “You Had Me at My Best” — are especially attention worthy for the way they translate so well to a stripped-down, unplugged format.

And therein lies the real charm of Watch This: everything feels lived-in, just right, and above all, fun. The set closes with a particularly enjoyable take on Wade’s “Saturday Night,” in which Bowen can be heard chuckling halfway through the first verse as though he’s just playing the song for a handful of friends, rather than in front of a sold-out club. A couple of lines later, Rogers interrupts him, just to mention that “the other day, I was in a gas station and I heard this song, and I was like, ‘Hell yeah, boy!’” — and later interjects again after the line where Wade asks the bartender to “throw those drunk girls out”: “Why would you ever do that? I just don’t understand!” But when he joins his buddy for some boozy harmony on the catchy chorus, it’s clear these guys are right on the same page together, having the time of their lives. — KELLY DEARMORE