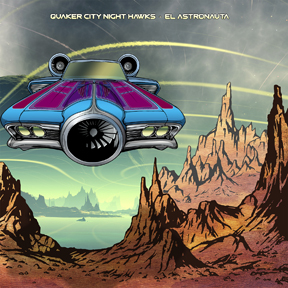 If you can count yourself amongst the early adopters who recognized something special in Quaker City Night Hawks from the get-go — cottoning to the raw promise laying right there in plain sight on their 2011 debut ¡Torquila Torquila! and 2013’s Honcho — take a bow and have a cigar. But if Album No. 3 happens to be your entry point to the Cowtown rockers’ oeuvre, well, even better. Because however satisfying it is to witness a talented young band come into its own step by confident step, El Astronauta is the kind of fully realized opus best experienced cold, with no long build-up or burdensome expectations to get in the way or cushion its impact.

For certain, no “previously on …” preamble could serve as a more fitting intro to both the band and the album than the swaggering “Good Evening,” which opens El Astronauta with a rolling boil of come-hither menace and blast-furnace heat. The postmark says “Fort Worth, Texas,” but the card reads like a dispatch from Hell: “We come from the land of oilfields / iron nightmares and fevered dreams.” These guys may have cut their teeth on the same “Texas music” scene that’s launched a thousand good times bands, but if you came to Quaker City looking for bluebonnets and party anthems, boy are you ever in for a rude awakening. But hey, as long as you’re here, might as well strap in and enjoy the harrowing — or as the Hawks put it themselves a couple tunes later, “Don’t be afraid to make a couple wrong turns / Where there’s smoke there’s fire and we all got something to burn.”

That’s not to say that the Night Hawks — co-frontmen/guitarists Sam Anderson and David Matsler, bassist Pat Adams, drummer Aaron Haynes, and keyboardist Daniel Creamer — try to hide their roots as a scruffy Southern rock band; indeed, tracks like the howling “Medicine Man” and the rumbling “Duendes” do nothing but underscore the ZZ Top-inspired dirty boogie blues hard-wired into their DNA. But the apocalyptic/sci-fi themes running throughout the record and the sinister edge to their musical attack here suggests an equally close spiritual kinship with the likes of ’70s hard rockers Blue Oyster Cult or, to pick a more contemporary and closer-to-home act, the retro prog-metal soldiers in Austin’s the Sword. And let’s not ignore the big Pink elephant onboard this ship, either, because when El Astronauta hits interstellar overdrive, the Night Hawks fly their Floyd flag proud. You can hear it snapping in the hot wind that blows through “Something to Burn,” and it permeates every last note in the album’s penultimate track, “The Last Great Audit.” This is mind blowing, melodically turbo-charged psychedelic rock ’n’ roll as fit for headphone-tripping as it would be for soundtracking a Mad Max-style mutant battle royale across an endless stretch of desert highway. But no matter how bleak the landscape and foreboding the imagery of songs like “Beat the Machine” (“Famines rage while the withered sages point their fingers at the Beast / this war machine and all the death it brings crashing bodies underneath”) — the propulsive momentum never sputters for a minute. How fitting, then, that it culminates with an assertive, gospel-singed call to arms (“Sons & Daughters”) that plays less like a grand finale and more like the countdown for the Quaker City Night Hawks’ next great adventure into parts unknown: “We’ve gotta go down a little further / Till our ears bleed, our ears bleed.” So, one question, hombres: How soon can we sign up? — RICHARD SKANSE