Q&A: Rodney Parker For their new album “Bomber Heights,” the hard-charging Texas songwriter and his band 50 Peso Reward dare to dial back the loud while cranking up the intensity. 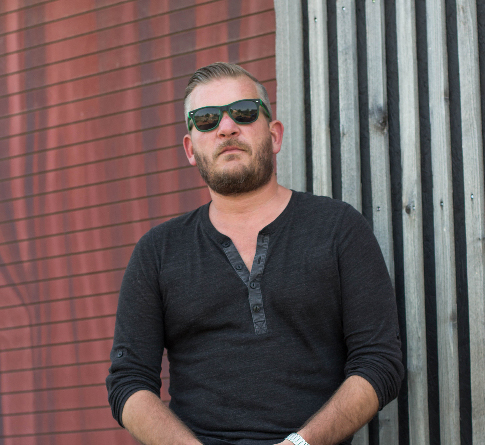 After Parker and 50 Peso Reward released 2013’s The Apology: Part 2, the singer-songwriter moved from Denton to the Fort Worth neighborhood of Bomber Heights. The move became a catalyst — and album title — for Parker’s latest album, the crisp and seasoned Bomber Heights (Sept. 16). It’s the seasoned songwriter’s most intimate and up-close collection to date.

“It was a reset for me personally that also coincided with a change in philosophy within the band,” says Parker. “Whereas with the last couple of releases we tried to stay within the rules of radio and commercial success, with Bomber Heights we decided that we don’t give a shit about anything anymore except making music that we believe in. And come what may.”

With acclaimed producer Matt Pence (Centro-Matic, Justin Townes Earle, Quaker City Night Hawks) at the helm, Parker was able to ease off the gas pedal and take time to search for the right tones and textures that fit within the calm, crisp realms of Bomber Heights. Highlights “The Road Between None and Some” and “Ballast” have the thick bass and drums that you feel throughout while fresh lead guitar comes in and out as it soars above the rest. And on tracks such as “Skin & Bones,” “I Am a Cinematographer,” and “Moon,” Danny Skinner’s banjo plays a more prominent role than ever before — essentially becoming a driving force for the album. While the instrument has always been an element of the band’s sound, the change in philosophy gave Parker and company the freedom to experiment in ways they wouldn’t have in the past. Other accent pieces such as the pedal steel and keyboards help contribute to a warmer, closer, and more intimate feel.

Parker’s always had a knack for writing singalongs that met somewhere between rocking alt-country and heartland anthems. The Lonesome Dirge and The Apology were built on driving, sharp guitars that became the pulse of Parker’s songs. That melodic pulse is still there in Bomber Heights, but it’s cleaner and more cautious. Like the backside of Bruce Springsteen’s The River or a beefed up Nebraska, Parker dials it back. He makes you lean in and listen.

Bomber Heights has more of an Americana feel to it than your other albums. It’s less guitar driven than previous efforts and has the band utilizing more banjo, pedal steel, and keyboards. How’d you decide this set of songs needed more of a delicate and mellow touch those instruments help provide?

Really, it wasn’t a conscious decision for us. Some of it was more spur of the moment. We tried different parts on banjo that were originally on guitar. If it worked, we kept it. It wasn’t really a thing where we tried to sound more Americana or anything. I did want use more clean electric guitar tones throughout. I love loud-ass distorted guitar tones, but we’ve done do much of that before. Before we went in, I was thinking about making the album with cleaner guitars.

“Skin & Bones” is a song from Live in the Living Room. It’s the only song we’ve heard before on the album. It has that banjo progression throughout. Do you think that rubbed off on the rest of songs?

I don’t think it was that tune in particular. The Lonesome Dirge I think had some banjo on there as well. Danny [Skinner]’s always played banjo live so we’ve always thought of it as part of our sound. I think it really was a lot of spur of the moment decisions where we tried different parts on banjo and ended up liking more of those moments.

Is “Skin & Bones” the oldest song from the album?

Yeah, I think so. The song “Moon,” that was a co-write with Danny. He’s had that chorus melody for five or six years now. We had tried doing something with it so many times, but never could find something that worked until this record. I think those two would be the oldest.

Were these songs spaced out — as far as writing and finishing them — or did they come in a pretty set space of time?

They were kind of spaced out. Like I said, “Moon” and “Skin & Bones” are kind of old. “The Road Between None and Some,” that’s really new. Zach [Galindo] had that chord progression, but we didn’t really start writing it until we were in the studio. A lot of the older tunes, they ended up changing in the studio, so in a way, a lot of them felt refreshed to us.

The song “The Day is Coming,” that’s kind of the flip slide of “I’m Never Getting Married” from The Lonesome Dirge.

Yeah. In a way, it’s kind of a sequel to that song. It’s one that’s from a while back. I’m not in that situation now, but it’s definitely a song that I wrote from my personal first-person perspective. “I’m Never Getting Married,” that’s such a fun, sort of a tongue-in-cheek song. It’s a bar anthem in ways. “The Day is Coming,” it’s very much the same subject matter, but it’s the reality of the situation. It’s the serious take after you go through the buddies drinking singalong of “I’m Never Getting Married.”

“The Day is Coming” is kind of the middle of the album, which gets into weighty subject matter — like getting over a breakup and seeing the other picking up the pieces slightly before you’re able to. Your songwriting has always dived into the more serious side of things. Does that just come natural to you?

I’ve never really been good at writing light-hearted songs. I do like songs like that — it’s just never been something I’ve been good at. I think it’s more interesting to write about more serious stuff. It’s always been more natural for me to write that way. I think, for me, it’s more genuine.

While most of the album does take that more mellow approach, “Night in My Hand” is more guitar driven. It’s a rushing anthem that’s something closer to what we’ve heard before.

Yeah. That’s a newer song. I had the chorus of the song and thought it was going to go a different way for the verses. I actually pieced together two songs I’d been working on to make it. I didn’t think they’d work together, but they meshed together really well. Each one of them on their own would have become much different songs. It’s one of my favorites to play.

You’ve talked a little about feeling the pressure of making something for radio cuts in the past. You’ve said that Bomber Heights wasn’t going to be that. If there were songs that had commercial success, that’d be great, but you weren’t going to be pressured or driven to comprise your gut feeling. Was there relief when making the album that way or did some of those thoughts still creep into the back of your head?

You know, I didn’t feel any struggle at all. It was really freeing. It made making the album so much more enjoyable. When we were doing songs that I knew no one was going to be playing on the radio, it made decisions go smoother. Like I said, the entire process was so much more enjoyable for us.