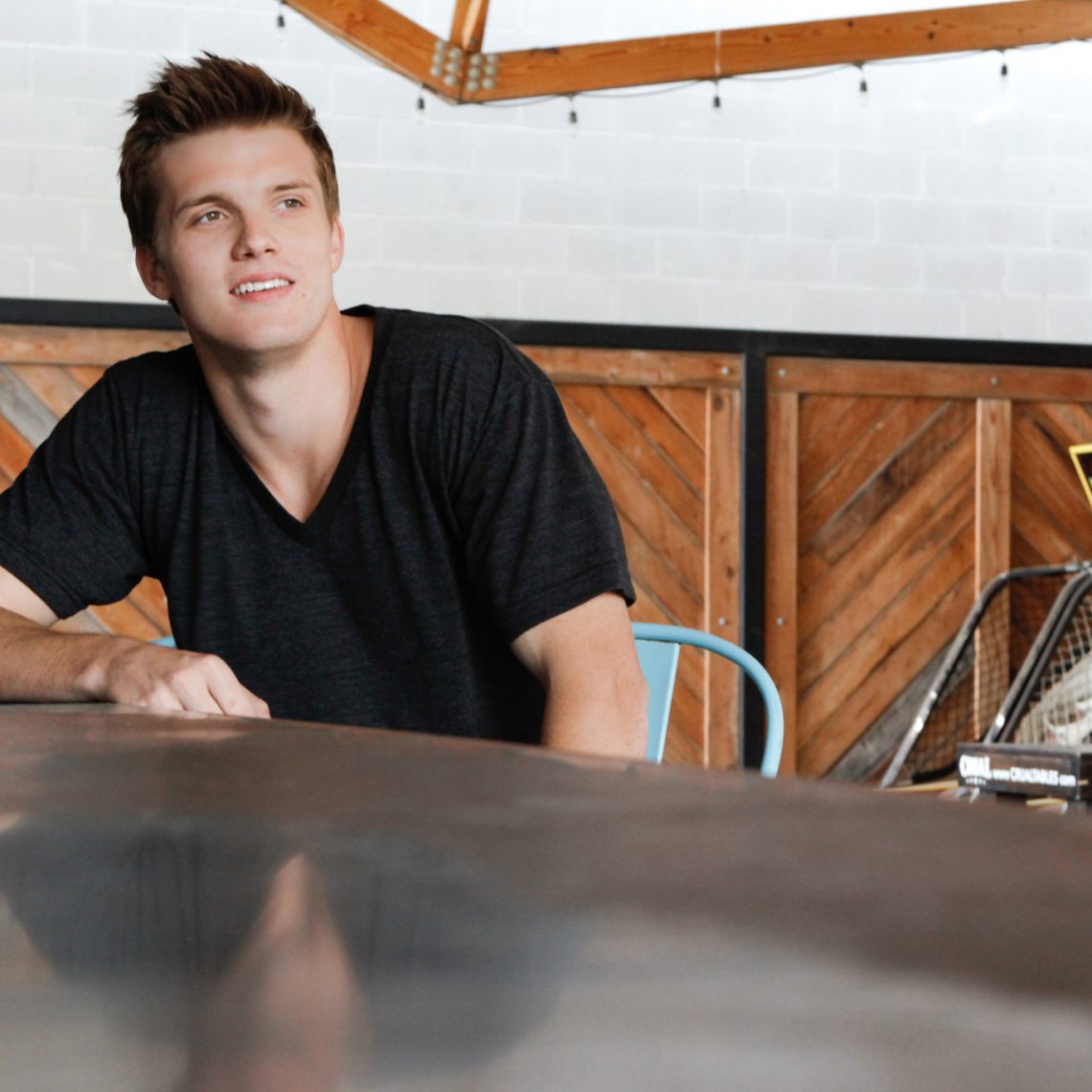 Try not to judge singer-songwriter Parker McCollum by his cover. The 23-year-old “Limestone Kid” from Conroe is well aware of the fact that some fans on the Texas music scene — mostly men — might be reticent to take him seriously, but it’s a situation that he wholesomely shrugs off. After all, all he can focus on is trying to write the best songs he can, and the fact that he just happens to look like a chick-magnet frat dude on spring break just sorta is what it is, you know?

McCollum’s shows are bouncy and fun with a party atmosphere, and his songs live in the suburbs of pop music, but never go full bubblegum. He crafts his own songs rather than cherry-picking savory cuts from revered songwriters to build credibility. He charted two singles on the Texas Music Chart (RIP) last year, won Larry Joe Taylor’s songwriter contest, and his full-length debut, 2015’s Limestone Kid, proved an undeniable success at exponentially spreading his fan base. He’s already on the verge of a major breakout, already playing the most revered dancehalls in Texas and opening for legends — and yet he’s still young enough to have room left to grow. Meaning he’s still got plenty of time to actually win over some of those less open-minded and/or jealous dudes who otherwise might only attend his shows to flirt with the many female fans in the audience.

In advance of his scheduled appearance Friday, March 18 at the Lone Star Music and KOKE-FM hosted “Dillo Mixer at Threadgill’s World Headquarters” in Austin (a free 11 a.m.-6 p.m. day party also featuring Jamie Wilson, Chris King, the Deer, Quaker City Night Hawks, Harvest Thieves, Cicada Rhythm, Loose Diamonds, and Javier Escovedo), we caught up with McCollum to find out how he’s handling his success to date. (And no, “the Kid” did not conduct the interview over beer pong and shots, but rather nursing Gatorade and soup, as he was fighting a flu hoping to be back in top shape for his next show and SXSW week.)

You’ve had a lot of success since the release of Limestone Kid last year, and you’re still definitely on the rise. How does it feel to be where you’re at right now with your career?

I have yet to feel as though I’ve “made it” in music. Probably won’t feel that for quite some time.

What would mean you’ve “made it”?

The day that John Mayer or Rodney Crowell can honestly say they dig something I’ve done, then I’ll say I’ve made it.

But you’ve got to notice some of the success. For instance, how do you respond to the girls that run up to you after a show, all of them basically proclaiming “we love you!” That’s star treatment.

The girls at the shows are flattering, but you can’t pay too much attention to it. I don’t ever want to write songs for reaction, especially not the reaction of young girls. If I can make them giggle by writing real songs, then I’ll love it, but writing real songs is my only goal.

I would like to say that my favorite line I’ve written is in my song “Permanent Headphones,” which was on my EP (2013’s A Red Town View). I wrote “diggin’ up dirt just to fill the hole.” I always thought that was pretty clever although I’m sure someone had said it before. I had honestly never heard it until I got high and wrote it down.

If you’re going to write songs, what masters do you study?

If you want to write songs, you’ve got to study what grabs your attention. For me, I heard Steve Earle play “Ellis Unit One” at 12 years old and just could not believe something so incredible even existed. To write real songs from the heart and play around these parts, study anything Kristofferson, Steve Earle, Rodney Crowell, Chris Knight, Hayes Carll, James McMurtry, Guy Clark, Todd Snider, any of those guys that lived their songs and albums. You’ve got to live your style of writing to have a style of writing if that makes sense. Go all in or don’t go at all.

As for other studies, you’re about the age of a college junior, give or take. What’s your college experience?

I did three semesters of community college as a business major in Austin and then dipped out when I met Corby Schaub. My mom was the main one against me skipping out on college to figure out how to make it, so I feel as though she is relieved that’s it’s going okay now. The only thing I ever wanted to be besides a songwriter was the Governor of Texas. And yes, I would like to have several degrees one day. Kris Kristofferson inspires me to pursue the highest level of scholar possible. He’s perfect.

From “kid” to governor would be a jump. Do you think that “Limestone Kid” moniker will ever be a negative? And since you mentioned Rodney Crowell already, was that title an attempt, on your part, to follow the “Houston Kid”?

I don’t think the “Limestone Kid” will ever become anything negative. I wrote all those songs from the one spot in my mind that I always seem to go to when I write, and that’s my grandfather’s ranch in Limestone County where I spent the summers as a kid working for him. It’s not an attempt to follow The Houston Kid, but that is one of my top 10 favorite albums ever, and I was obsessed with Billy the Kid growing up. That whole idea of doing what you do at such a young age, which was always my goal from the start, ya know? To succeed while still young.

When I was first starting to play music in bars, I wasn’t even old enough to get in, so everyone always called me a kid wherever I went. “Hey, there’s the kid that’s playing tonight.” It’s not necessarily the kid, just the “Limestone Kid,” a songwriter with sappy broken-heart stories and troubles that probably wouldn’t be troubles to anyone else. I had originally dubbed the album “The Austin Kid,” but I knew for sure that I couldn’t do that, so that’s when I came up with the “Limestone Kid.” The front of the album clearly says by Parker McCollum. It’s the title of a story — or at least it was before it became somewhat of a nickname. I still get called P-Mac more than anything else.

How do you balance youth and success and being a band on the road?

Well, we haven’t had very much success in my eyes. We have gotten our name out there and done some cool things, but my goals are much bigger. There’s not much to balance right now other than making sure we don’t get stoned until after the show and everything is packed up.

What’s been your best professional move so far?

The best professional move I made was deciding to produce my debut full-length album with Corby Schaub. He was the first one to ever take a chance on me and he taught me so much just by operating the way that he does in a studio. He was the only person that could see what I saw and hear what I heard in my songs. He’s a true musical talent in every sense of the phrase.

Speaking of fellow musicians, if the world were perfect, what song would every band cover?

If the world were perfect every band would cover one of my songs so it could get really popular, and I could tour the world like I dream of doing one day! [Laughs] But honestly I don’t know; hopefully there is never a time where every band covers the same song. If I absolutely had to pick one, I’d say, “Can’t Help Falling In Love” by Elvis Presley.

In your opinion, what artist out there right now has the coolest merch?

Turnpike Troubadours has the coolest merch, but they have the coolest everything, so that’s nothing new. Also, John Mayer has the dopest stuff, but I don’t know if many people in Texas music like him like I do. Maybe I should stop name dropping him so much.

What false assumptions to people make about you, and how do you combat those?

A lot of people judge me right off the bat, understandingly so. They usually like my music but don’t like that I look the way I do, [so] the most common one may be that I am in bed with another girl every night. Neither of those are true. I smoke pot sometimes and have been with the same girl for a year. You could say I’ve settled down a lot to focus on making it and writing good songs. It’s helped with the focus part but not with the song writing. I guess I’ll have to really fuck some stuff up again to write this next album or it might not have much substance to it at all.

What’s the next career tier for you? Do you have a checklist of goals?

The only goal is to play my songs on the biggest stage possible. And by my songs I mean the songs from the current album wherever I may be in my career. Just to make one great album at a time and to improve as a musician and songwriter. I couldn’t ask for much else.