Q&A: Nikki Lane From High Class Hillbilly to “Highway Queen,” the Nashville-based entrepreneur and upstart Americana maverick has always kept her hands on the wheel 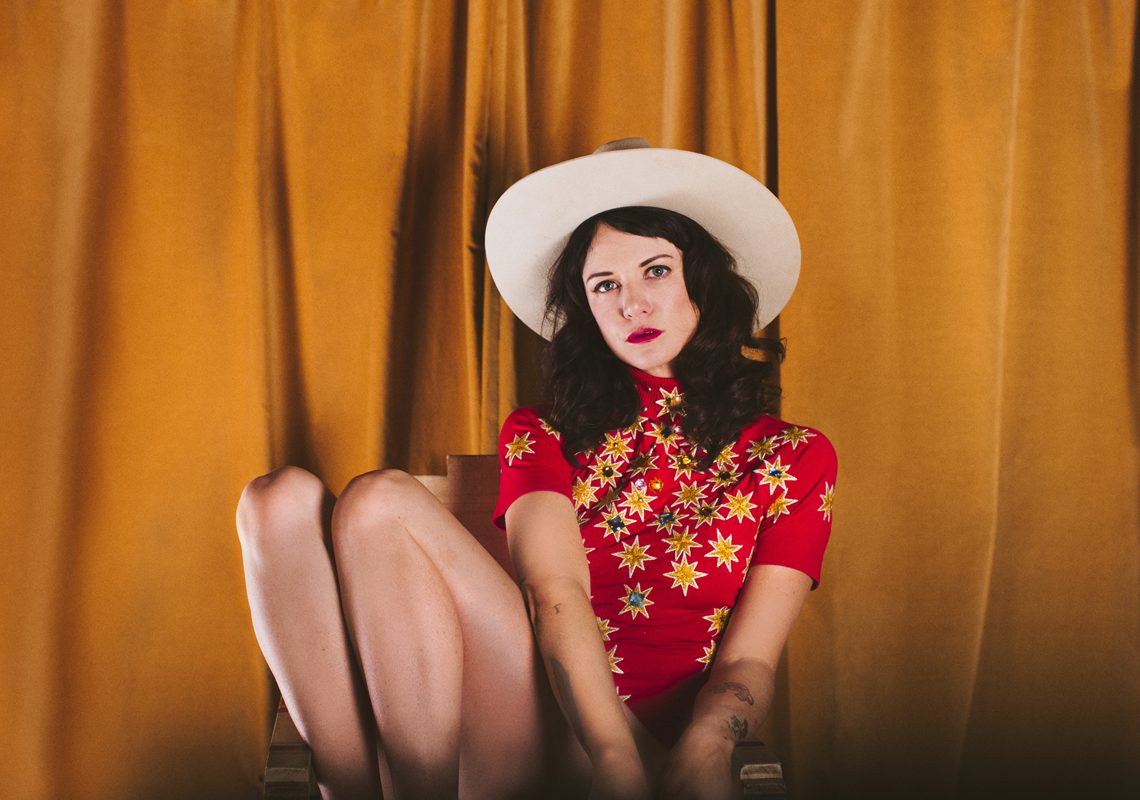 On the cover of her third album, Highway Queen, outlaw-country upstart Nikki Lane poses in a vintage dress, draped across the horns of a massive Texas longhorn steer. It’s an arresting image, but no more so than her fiercely commanding voice and vivid songwriting, whose emotional depth often belies the firebrand image that Lane’s acquired over the last half decade since her debut on the Americana music scene.

Lane initially worked as a fashion designer, and took up songwriting as therapy in the wake of a bad breakup. After stints in Los Angeles and New York, she settled in Nashville, where she also owns and operates the vintage clothing store High Class Hillbilly. But it’s as a singer-songwriter and recording artist that she’s made her biggest artistic splash. While her first album, 2011’s independently released Walk of Shame, flew well under the national radar, her 2015 sophomore set and debut for New West Records, All or Nothin’ — produced by Dan Auerbach of the Black Keys — went a long way towards expanding the fanbase of the South Carolina native. So did the thousands of miles she logged on the road touring behind that album, an experience that in turn played a significant part in shoring up the confidence, maturity and strong sense of identity that comes into such sharp focus on her new album.

Lane recorded Highway Queen in Dallas and Nashville, co-producing with her significant other (and notable singer-songwriter in his own right) Jonathan Tyler. We caught up with her just before the album’s Feb. 17 release to talk about her thoughts on songwriting, recording, and drawing on her background in both fashion and owning her own business to keep her music career propelled in the right direction. 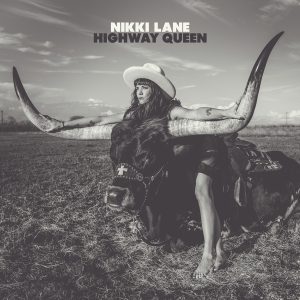 Highway Queen’s cover image is a pretty powerful visual metaphor.  What did you have in mind?

I knew the record was gonna be called Highway Queen before I actually had the song, just because that was my alias. It was this character that could survive this new life that I had brought on myself by getting a little recognition with All or Nothin’, and transitioning from vintage-store dabbling and part-time songwriting to full-time touring musician. That became pretty apparent when I realized that I had been on the road for two and a half years.

Highway Queen is the exterior shell that I’ve created for the purpose of surviving touring. And then when you slip into some of the more intimate songs, there’s maybe a little bit more of what’s actually in there, and not the tough girl who can handle driving a van 60,000 miles.

A lot of people know you for writing songs about wild and reckless behavior, but the introspective and heartbroken songs on this album are really strong, and seem to be coming from a very real place.

I just feel like I’m growing up. I’m a late bloomer, in the sense that I didn’t start writing until my mid-20s. And when I did, a lot of my friends had already done a bunch of records, and I was still just a rookie. I’ve written under a 100 songs and recorded half that many, so I’m still kind of a novice and still growing into my own. Also, a lot of the erratic behavior that was expressed on the last couple of records is about being in your mid-20s and pursuing a career without a guarantee. Now, it’s become what I do and I’ve accepted that I do it because it’s not just about me anymore. There are other people involved now, and what I do directly affects them.

You can get to a place where you want to quit, but you snap out of it. Your fans want a new record, and you’ve got a team of people who’ve put their time and trust in you, so you’ve got to keep it going. I struggled with that last year, which was kind of a dead year touring-wise, because we didn’t have a record ready in time. Things started to slow down, and my guys went and started working on other projects. They were fine with it and they knew that we’d be back in when the record came out. But I feel loyal to them to keep them busy.

I really like “Companion.” I wrote it at my kitchen table one night. It was the end of the night, we had done two songs that day and it was about 2 in the morning. I was showing it to the piano player for the next day, and I just got excited and the engineer and drummer brought the mics over and we just tracked it and we never touched it again. The lyrics of that song are about the ideal situation, and the recording process was, too. And I love it because it’s exactly like that. That’s what I like about this record, that the songs were all finessed until just so, and then piled together. I don’t think “Companion” sounds like anything else on the album, but I think it fits on there quite nicely.

I also like “Big Mouth.” Nashville is a really strong community, and people really have each other’s backs, but it is a small town. I ran into a scenario last year, with a problem involving a friend of mine, and a woman who was behaving badly toward her online, and I lit her up. She had had this rant online for a few days, and it was gone within moments after I got done with her. If she doesn’t know yet that “Big Mouth” is about her, it won’t take long.

Now that you’ve made a few albums, is recording starting to feel second-nature to you?

I’ve done it a different way each time. This time, we made the record twice.  The first time was in July of 2015, while we were on tour. We took 10 days off and went into the studio in New York, and I didn’t think that I captured what I wanted to. I was too tired and didn’t speak up enough about what I liked, and I didn’t like the results. I was over it, kind of, because I’d been working so hard that I didn’t have time to think about how I could fix it.

I had started dating Jonathan Tyler, whose record I had sang on a couple of years before, and he said, “Well, what if we just went in together, and you drop your guard, and we record for a couple days with our buddies?” “OK, that doesn’t sound so bad, can we afford to do it?” So we did, and by the end of those two days, I got my manager on the phone, and we listened to it, and we knew that we were gonna make the record that way. It was a lot better; I was able to hang out, and I felt comfortable collaborating.

Is feeling comfortable and confident in the studio a new thing for you?

So yeah, it’s a brand new process of getting to focus on all those things. I called on Jonathan for a lot of the sonic stuff, but I get to make the calls on melody, on hooks and stuff that I wouldn’t have done on the other records, because I didn’t know that I was allowed to. Being in a room with, like, six dudes, they don’t mean to gang up, but it can be really hard to say, “No, undo that key change, we’re not doing that.”

I’m more comfortable speaking up now, because I know that I’m gonna have to market it for the next three years and I’m gonna have to sing it 400,000 damn times. So i’’s got to be the way I like it. It’s not that I don’t want to negotiate, it’s just that it’s my name that’s on the record, so it’s not other people’s call.

You’ve talked a lot about your working-class background, and how it’s informed the way you approach your music career.  Does having run a business influence you as well?

It’s definitely influenced me, 100 percent. You don’t realize when you’re becoming a songwriter that you’re starting a business also. I’m totally a strategist, and someone who believes in developing ideas. So it’s all been a building process, from when I was younger and wanted to design shoes, but didn’t realize that I didn’t understand wholesale and retail, which is what put me into fashion in the first place.

You know, merch is so important to me, because I want to make stuff that people want to wear — not just stuff that you think is cool, but stuff that feels good and fits good. That makes it a little more expensive, but if 20 less people buy the shirt because it’s five dollars more, that’s on them. A larger percentage of those people will actually wear the shirt, because of how good it is. I think that a lot of artists don’t care about that, and it may not matter to them. But I like to see people wearing my brand and taking it further than just listening to the CD, which is good, because most people aren’t paying for music anymore so that’s a way to show their support for the artist.

A lot of artists seem to feel like thinking about that stuff is beneath them.

People sometimes say that you’re selling out, when they really mean that they don’t understand. If it’s overwhelming for somebody to talk about the numbers of their art, maybe they shouldn’t do it. I just don’t possess that limitation, of not being able to discuss the business. I know how important it is for me to be able to pay my bills if I’m gonna do this.

It’s looking like we might be booked for the whole year, and that makes me happy but a little nervous. The major festivals are starting to lock in, and there’s plans to go to Europe and Australia, so we’re penciling in the map and leaving room for other opportunities that may arise. It’s looking good, though.