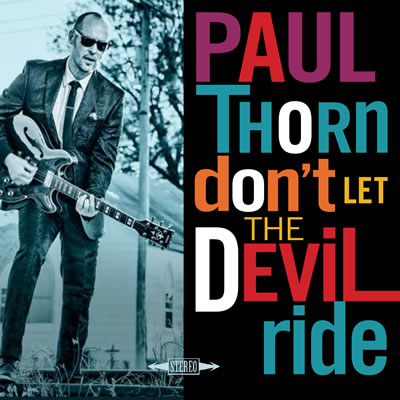 Considering that the lord and the devil are two of Paul Thorn’s favorite subjects, and his songs have suggested long-term relationships with both, it now seems inevitable that he would do a full-on gospel album. And considering that he and the McCrary Sisters, Nashville’s go-to gospel soul-shakers, hooked up so successfully on his 2014 album, Too Blessed to be Stressed, it makes total sense that they’d help him revisit the music that gripped his soul during a childhood spent trailing his Pentecostal preacher dad throughout Mississippi and Alabama, singing and beating his tambourine at tent revivals. But Thorn didn’t stop there. He and co-producers Billy Maddox and Colin Linden also recruited the Preservation Hall Horns, the Blind Boys of Alabama, and Texas-born singer Bonnie Bishop, who spent her adolescence in Mississippi, to sing on 14 tracks originally done mainly by black southern gospel artists. To record, the Tupelo, Mississippi-raised Thorn went back to “the Motherland”: Sam Phillips Recording in Memphis, FAME Studios in Muscle Shoals, and Preservation Hall in New Orleans. And you can tell; each song is infused with a sense of place. The Crescent City vibe, for instance, is unmistakable in the slow-burn blues march of “Something On My Mind,” on which Bishop slays her guest vocal, and the FAME funk slides along “One More River.” Opener “Come on Let’s Go,” an old-time call-and-response rave-up, sets the tone for an album full of bluesy, jazzy grooves so good, you’d almost swear they belonged in the bedroom, not the sanctuary. But the truly transformational moment comes toward the end, when Thorn and company locomote the O’Jays’ Gamble & Huff hit, “Love Train,” into a majestic gospel masterpiece. A keyboard-powered, slow-turning, steam-building soul train that refuses to leave one listener behind. People all over the world … get on board. — LYNNE MARGOLIS