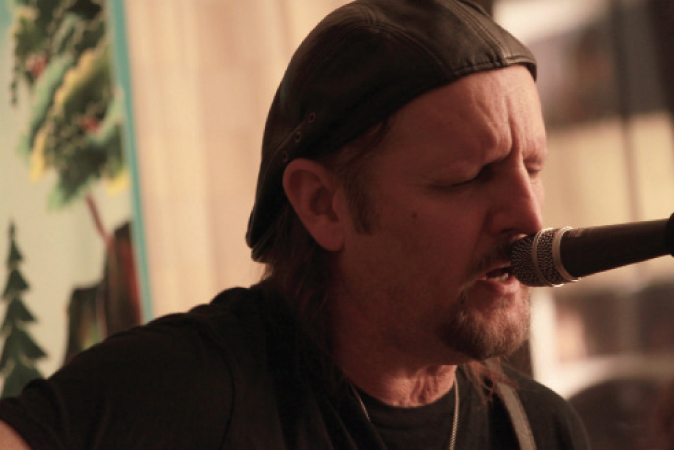 If anyone was going to get an early jump on the festivities celebrating Woody Guthrie’s 100th birthday this coming July 14, you had to figure it’d be Jimmy LaFave. On Jan. 28, the Texas-born, Oklahoma-raised singer-songwriter — together with peers and fellow Guthrie junkies Eliza Gilkyson, Slaid Cleaves and Terri Hendrix — staged the first two performances of “Walking Woody’s Road” at the One World Theatre in Austin, Texas. Backed by musicians Lloyd Maines, Richard Feridun, Glen Fuchs, and Bobby Callas, the four singers took turns swapping insights on Guthrie’s legacy and favorites both familiar and obscure from his seemingly endless songbook, including “Pastures of Plenty,” “Oklahoma Hills,” “Way Over Yonder in the Minor Key,” “Pretty Boy Floyd,” “Jolly Banker,” and of course “This Land is Your Land.” LaFave also read from a wide assortment of Guthrie’s other writings and projected some of his paintings, sketches and cartoons on a screen above the stage. 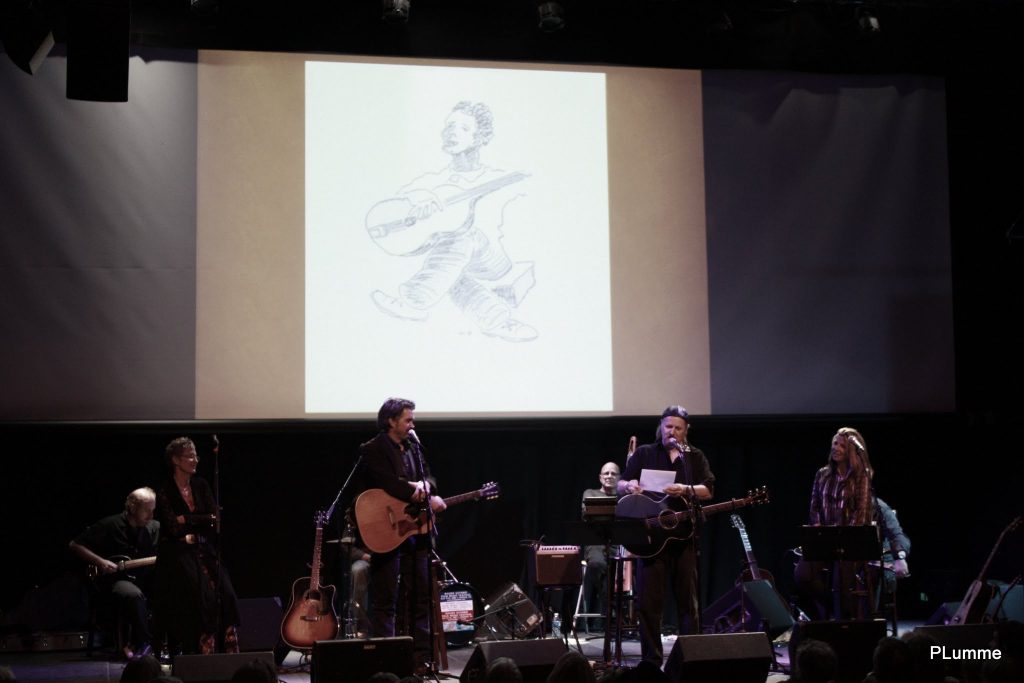 “Woody really was kind of the guy who started the whole singer-songwriter thing,” says LaFave, “but his cannon is so much bigger than just his songs. I think a lot of people put him in this motif as just this Dust Bowl hobo guy from the Bound for Glory era, and they don’t realize that he did a lot of other things. He wrote beat poetry and plays and novels, and he was also into art and dance. I don’t know that many artists who have done all of that, especially during that time period. And it’s all still valid. You read a lot of the stuff he said about bankers and Wall Street back in the ’30s and ’40s, and realize the guy was almost like Nostradamus, like in his insight into the way the world works. Not that much has really changed, and that’s why he still matters today.”

LaFave, who put the show together, now aims to take “Walking Woody’s Road” on the road. A handful of other dates are currently on the books, including an April 5 performance at the Kessler Theater in Dallas, presented as part of the Encore for Advocacy concert series benefiting the Dallas Children’s Advocacy Center. The Dallas show will once again feature Gilkyson, Cleaves, and Hendrix, though the lineup will change from performance to performance depending on who’s available. “By the end of the year I’d like to do at least 10 of them,” says LaFave. “I don’t want to overdue it, but I’d like to do it around the country at least once a month.”

He’s been down this road before. In 2003, LaFave launched “Ribbon of Highway, Endless Skyway,” a similarly themed tribute show that was performed, by LaFave’s reckoning, around 75 to 100 times across the country over the last decade. But whereas “Ribbon of Highway” featured a narrator (originally Red Dirt songwriting legend Bob Childers before his death in 2008) reading selections of Guthrie’s writings between sets by the different performers, the “Walking Woody’s Road” show is a lot less structured. It’s subtitled “A Conversational Hootenanny.”

“That’s what I called it, as a joke,” LaFave says. “But it is more casual. I decided for this we’d just all be out onstage together at once, talking about whatever we wanted to talk about, so it’s never the same show twice.”

“Walking Woody’s Road” is but one of many Guthrie tributes in store for 2012. West Coast songwriter Joel Rafael, who took over the narrator role in “Ribbon of Highway” after Childers’ passing, is touring with his own multi-media production, “Woody Guthrie’s American Road,” which LaFave took part in during February’s International Folk Alliance Conference in Memphis. LaFave also performed at the first “This Land Is Your Land: Woody Guthrie at 100” celebration held March 10 at the Brady Theater in Tulsa, Okla. Other artists on that show, presented by the Grammy Museum and Woody Guthrie Productions, included Arlo Guthrie, John Melencamp, Rosanne Cash, and the Flaming Lips. Additional “This Land is Your Land” celebrations are scheduled throughout the rest of the year for Los Angeles, Penn State University, Brooklyn, and the Kennedy Center in Washington, D.C. The website www.woody100.com lists several other centennial events, including concerts and conferences in Germany and Austria and the 15th annual Woody Guthrie Folk Festival in Okemah, Okla., July 11-15.

LaFave, of course, will be in attendance at WoodyFest, having been on the festival’s Advisory Board since its inception. He’s worked closely with the Guthrie family for years, going back to when Guthrie’s daughter Nora invited him to perform at the Rock and Roll Hall of Fame’s Woody tribute in 1996. Seven years ago, she also gave him VIP access to her father’s archives of unpublished lyrics, allowing him to pick his favorites to set to original music for his own Woody album in the vein of Billy Bragg and Wilco’s acclaimed Mermaid Avenue. It’s a project he hopes to finally get around to completing this year.

“Last year, Nora said, ‘I really need you to get this out for the centennial,’” LaFave says. “I kind of procrastinated on it because there’s been so many other Woody things that have come out — I’ve just been waiting for kind of an opening to do mine. But I’m going to try to get it out before the year’s over.”

Provided he meets all of his (and Nora’s) deadlines, the Woody project won’t be his only new release this year. LaFave aims to have a new studio record — his first since 2007’s Cimarron Manifesto — out by the end of spring, and also plans to polish off a pair of “bootleg records of radio stuff and board tapes.”

“So, counting the Woody record, I’ll probably have four different CDs out before the end of 2012,” he says optimistically. “It’s a good time to be busy.”