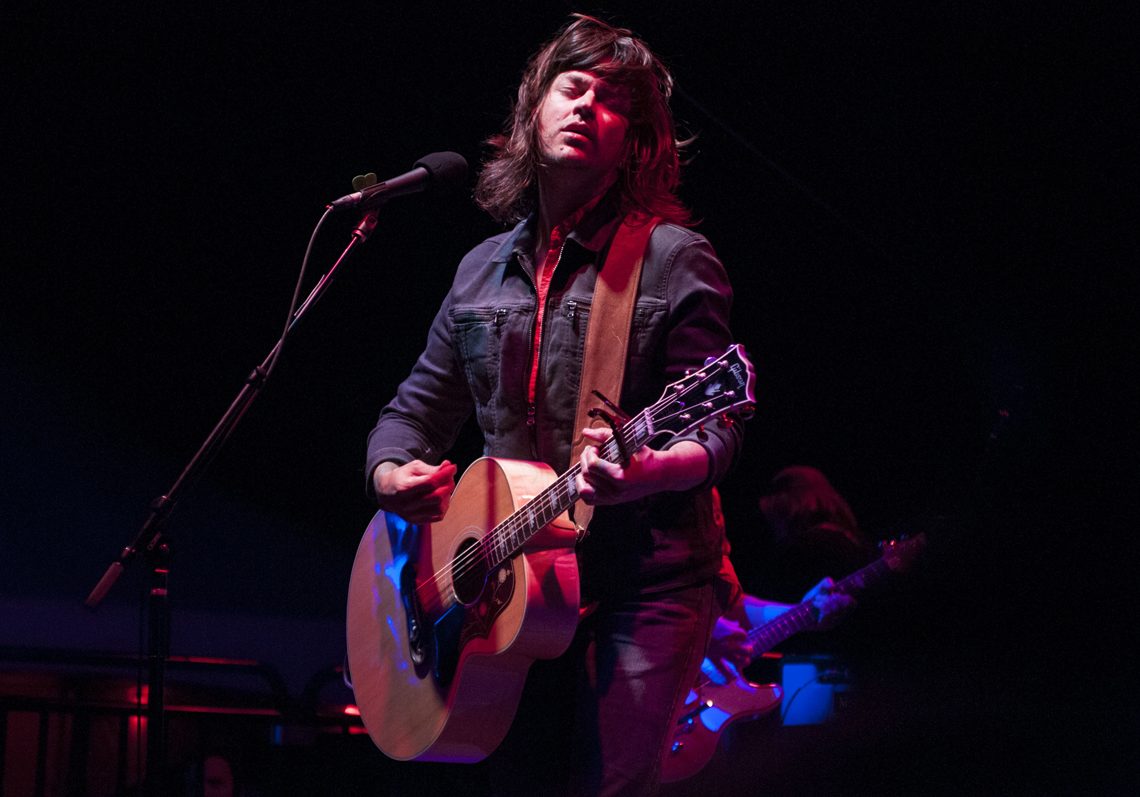 I wish I could say who served up the better cover of Prince’s “When Dove’s Cry” at the Old Settler’s Music Festival one Saturday night, one year (and a day) after the Purple One’s passing: Sarah Jarosz on mandolin accompanied by her stand-up bass player, or the incomparable Kevin Russell reportedly using every formidable weapon in his Shinyribs arsenal. But damned if I didn’t miss them both, and I’m not even kicking myself. That’s because while Jarosz, the Wimberley wunderkind who got her start at Old Settler’s playing the festival’s Youth Talent Competition 15 years ago, was no doubt enchanting her crowd over at the main Hill Country Stage, I was over at the slightly smaller Bluebonnet Stage, happily rocking out to the Old 97’s — aka still the best “alt-country/(whatever that is)” band of the last quarter century. Conversely, by the time Austin’s Shinyribs hit the Bluebonnet an hour later, I was entrenched over at the Hill Country Stage grooving to Los Lobos — and it would have taken an actual pack of rabid wolves to chase me away from that. 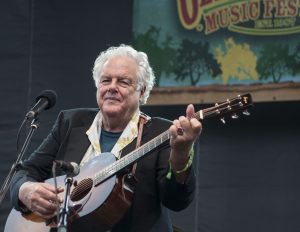 Such are the kind of choices one often has to make at any festival big enough to feature continuous music on more than one stage — even (or especially) when the festival in question is only just big enough for two stages. Surveying the full lineup on paper or screen, it’s easy to curse the inevitable scheduling conflicts pitting one must- or at least really should-see act against another to keep the crowd evenly dispersed, but most all of the matchups at Old Settler’s this weekend were very much of the win-win variety. Saturday was the only day I caught this year (the festival’s 30th, and 15th held at the Salt Lick Pavilion in Driftwood, right outside of Austin), which means I missed not only Friday night draws like Shakey Graves, Sam Bush, and Reckless Kelly — who were joined by Robert Earl Keen guitarist Rich Brotherton for yet another apparently stellar Prince cover, “Purple Rain” — but also all of the Thursday night and Sunday morning/afternoon performances at the satellite Campground Stage across the street at Camp Ben McCullough (including a second turn by Shinyribs). But in addition to the aforementioned headliners, Saturday’s slate alone also featured bluegrass legends Del McCoury and Peter Rowan, eclectic roots acts Elephant Revival and the Lone Bellow, and Americana’s ballsiest new “It” girl in years, Nikki Lane. Not to mention a full afternoon of open-to-all music and songwriting workshops/seminars led by Jarosz, the Traveling McCoury’s (aka Del’s family band), and others. 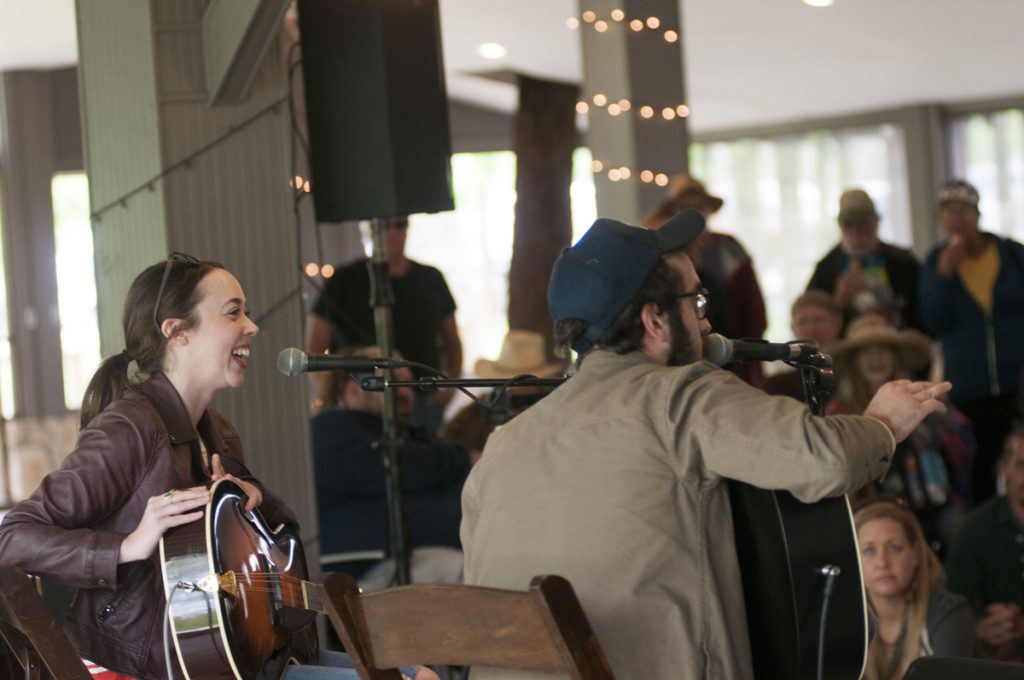 Despite still being in her early 20s, Jarosz, just like legacy acts McCoury and Rowan (both alumni of Bill Monroe’s Blue Grass Boys), is by now one of the longtime staples of the OSMF, which for years billed itself as the Old Settler’s Bluegrass Festival. But it’s a huge credit to the organizers that, 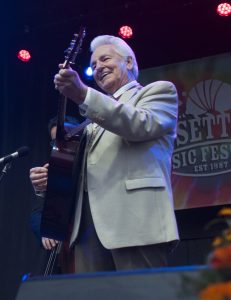 working with a budget that probably wouldn’t even cover the “gospel tent” at the Austin City Limits Music Festival, they’ve managed to not only keep those genre giants coming back, but also regularly showcase enough fresh faces and Los Lobos-level headliners year after year to avoid falling into a same-old/same-old sense of complacency. From acoustic string bands to Texas songwriters to rockin’ Americana, anything that even sorta fits under the broad umbrella of “roots music” is always fair game at Old Settler’s — which no doubt accounts for the festival’s success in attracting an equally wide age-range of fans, be they three-night campers or day-trippers. It seems to be getting younger every year, though. Families with young children still abound, along with plenty of older hippies and folk-loving retirees undoubtedly headed for Kerrville in a few weeks time. But the crowd this Saturday (and I imagine Friday’s even more-so) on average definitely skewed a lot closer to Jarosz and Lane’s generation than 78-year-old McCoury’s. 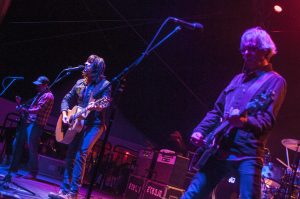 Perhaps out of respect to stately fellow Bluebonnet Stage performer Rowan (age 74), the not-quite-that-old Old 97’s did refrain from playing their terrific 2014 anthem “Longer Than You’ve Been Alive.” But they certainly didn’t seem to feel any need to unplug or temper the full-throttle punkish rush of “Doreen” or the horny come-ons of “Let’s Get Drunk and Get It On,” let alone to teach anyone in the crowd the singalong chorus to “Barrier Reef.” The closest they got to “conservative” was their sincere-but-amped-up salute to Merle Haggard via “Mama Tried” (sung by bassist Murry Hammond); a few songs later, charismatic frontman Rhett Miller teased “here’s a song about Jesus,” but that of course turned out to be the delightfully profane “Jesus Loves You,” one of a handful of songs plucked from this year’s Graveyard Whistling. They closed with the same album’s other song name-dropping the big guy, “Good with God,” with the dusky-voiced Lane singing the god parts delivered on record by Brandi Carlisle. 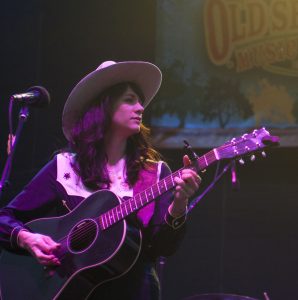 Lane, who preceded the Old 97’s on the same stage, had already dished out plenty of swagger of her own, opening with the title track to her recently released Highway Queen and burning through a set of crunchy hipster-tonk spiked with hot-mess sass, whiskey-soured twang and equal measures “Are You Sure Hank Done It This Way”-era Waylon (“700,000 Rednecks”) and “Fist City” Loretta (“Man Up.”) As if in answer to that latter challenge, the scruffy, East Nashville-looking rock ’n’ roll dudes in her band proved more than up to the task of matching her stride for ultra-confident stride, with Texas ringer Jonathan Tyler (rhythm guitar) even stepping up to trade verses with Lane on a couple of songs, including his own “To Love is to Fly.”

Shinyribs would have the honor of closing down the Bluebonnet Stage, but having already seen them recently at South By Southwest back in March, after the Old 97’s I made fast tracks over to the Hill Country Stage to catch the mighty Los Lobos — aka, maybe the only band in the country that could be scheduled opposite Kevin Russell and Co. anywhere in the greater Austin area and not have to play to crickets. They did not disappoint. Reminded by a companion on the way over that 2017 marks the 25th anniversary of the landmark Kiko, I admittedly would have loved to have heard a set leaning a little more towards that album’s otherworldly beauty. But between such highs as “Will the Wolf Survive” and a long, freewheeling Tex-Mex jam nodding to both Freddy Fender and Doug Sahm (with a generous sharing of the spotlight on guest accordion maestro Max Baca of San Antonio’s Los Texmaniacs), the band really didn’t offer much cause for nit-picking. Best of all — at least until the encore — was the joyously irresistible “Cumbia Raza,” which Cesar Rosas introduced with two words surely never heard before in the 30-year history of Old Settler’s, let alone at any other festival that ever had “bluegrass” in its name: “Everybody, cumbia!” 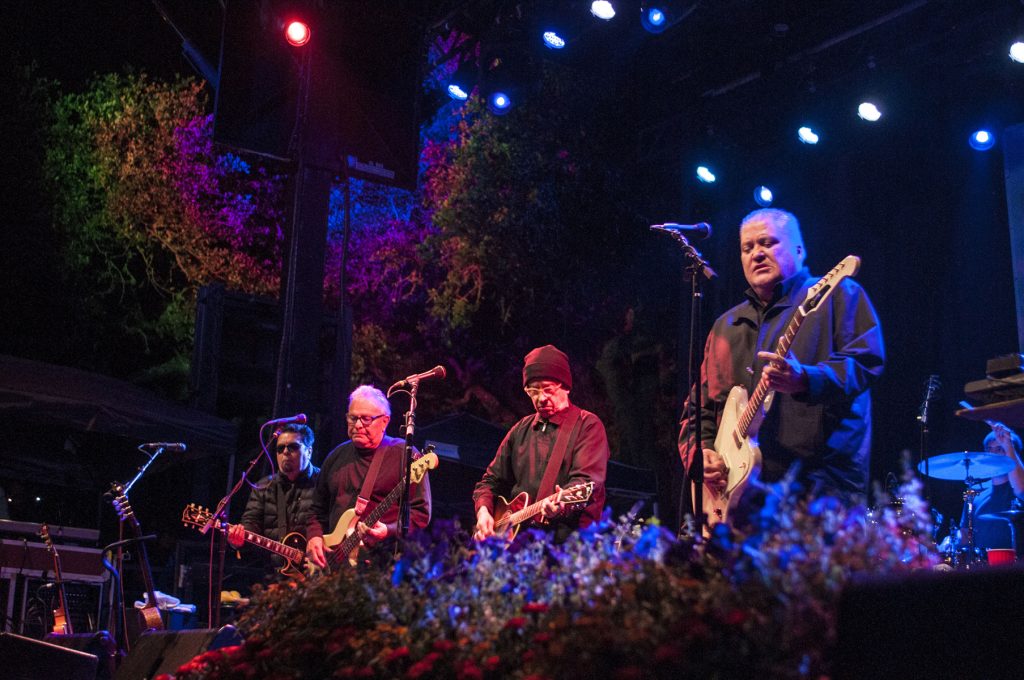 “Everybody, cumbia!” Los Lobos dishing out “Mas Y Mas” and more on the Hill Country Stage. (Photo by Nichole Wagner)

When Los Lobos left the stage an hour or so after that number, one beaming but insatiable fan could be heard yelling out “One more set!” We didn’t get that much more, but Rosas, David Hidalgo, Steve Berlin and the rest of the Wolves did return just long enough to send everyone home — or at least back to the campgrounds — with heads still buzzing from the searing, dizzying cyclone of “Mas Y Mas” and an equally fuzzy — but entirely satisfying — nightcap of Neil Young’s “Cinnamon Girl.”

How will Old Settler’s top that come next year? No telling. But based on this little festival’s track record, expect the best.