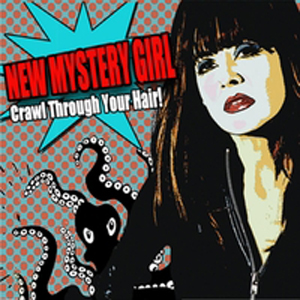 Fourteen years ago, I wrote a review of Chrissy Flatt’s Wings of a Butterfly in which I called it “the best debut by an unknown singer-songwriter I’ve ever heard.” Effusive? Yeah. But given that I still listen to that album today, I stand by it. Flatt, born in Austin but raised in San Antonio and Waco, could write and sing a hauntingly beautiful melody, but what set her apart from most acoustic guitar-strumming women (and men, for that matter) on the singer-songwriter scene was that she was a rocker to the core: heart on sleeve but tough-as-nails, like a Texan Chrissie Hynde weaned on Buddy Holly and Johnny Thunders. That became even more evident on her second album, 2004’s Walk With Kings, but it wasn’t until a few years later that Flatt shed the last vestiges of her songbird cocoon and came fully into her own on 2010’s Twist City — not as a solo artist, but as the frontwoman of New Mystery Girl. The songs, voice and vision were still Flatt’s own, but the new outfit seemed to absolutely liberate her, infusing her music with an electrifying jolt of newfound focus and verve. Six years of honing that persona to a razor-sharp edge — and locking down the perfect crew of seasoned cohorts in lead guitarist Eric Hisaw (Flatt’s main collaborator going back to her first album and an established solo artist in his own right), bassist Bobby Daniel (Alejandro Escovedo’s Sensitive Boys), and drummer Hector Muñoz (Javier Escovedo, True Believers) — has only increased her confidence tenfold. Crawl Through Your Hair! is a concentrated blast of all-killer, no-filler garage rock ’n’ roll with explosively catchy, classic pop hooks and cool swagger to spare. The six Flatt originals here are all variations of the same trashy pulp-fiction escapism (“Passion! “Lust! Mystery!”) and ’60s girl-group sass that gave Twist City much of its wild-ride kick: “Crawl Through Your Hair,” “I’m Not Ready to Let Go,” “Brand New Love” and “Stepping On My Toes” zip along like the Ramones cruising for Ronettes (or vice versa), while “Minute Man” and “Here He Comes” venture into buzzing Aftermath menace and Between the Buttons psych-pop whimsy. Best of all though is the last song, a ragged-but-right, live-in-the-studio crack at the New York Dolls’ “Subway Train” that feels like a woozy ride home after a dizzying night of mischief. That’s the thrill of New Mystery Girl and this 20-minute EP in a nutshell: It all flies by so fast, you might not know what hit you — but odds are you’ll be twitching for more. — RICHARD SKANSE