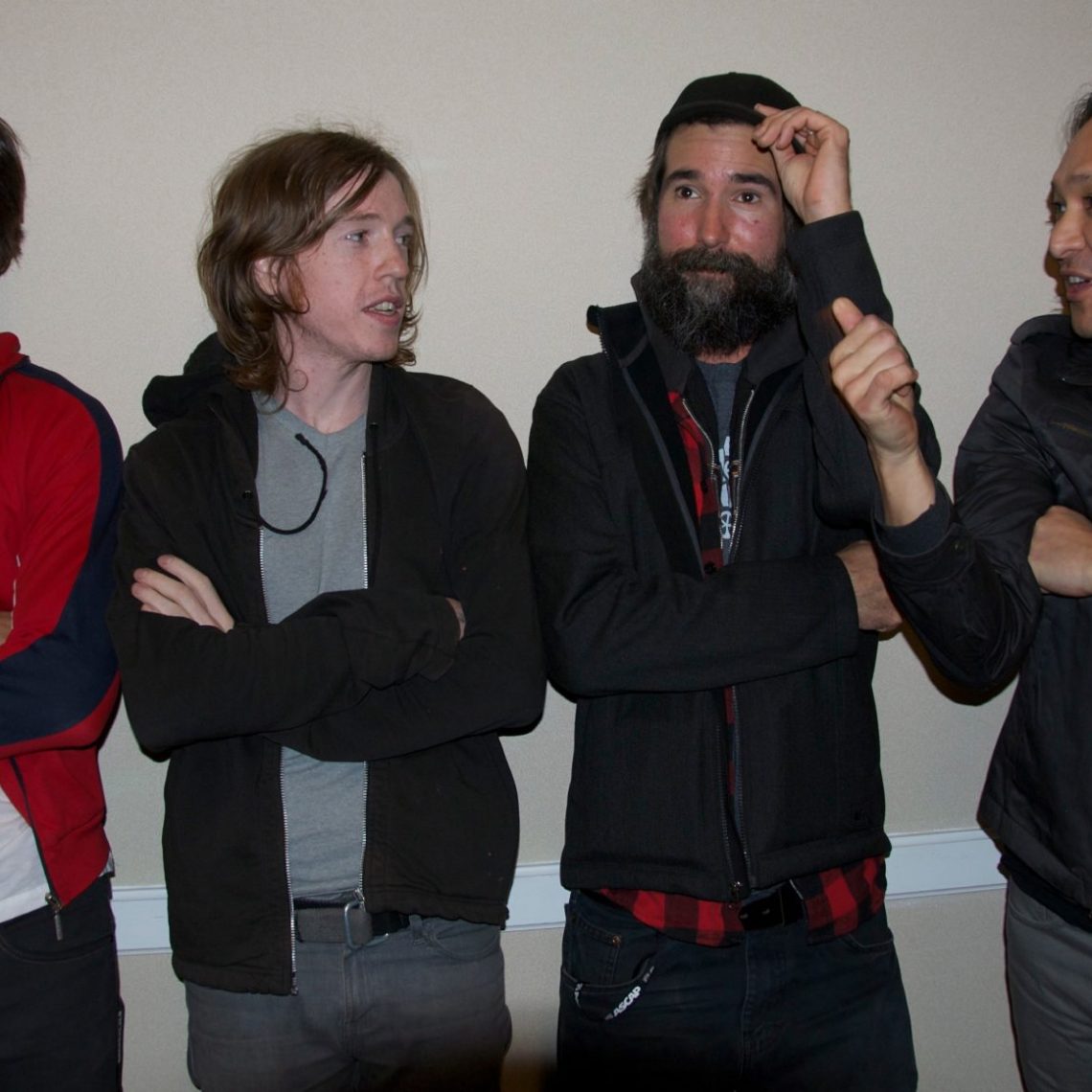 The Usual Suspects: Austin House of Songs mainstays and All I Know participants Nathan Felix, Danny Malone, Matt the Electrian, and Troy Campbell at Folk Alliance. (Photo by Lynne Margolis)

Austin musician Danny Malone has a particularly odd tattoo on his right forearm. It’s a set list, commemorating a performance he and 11 other singer-songwriters delivered on the final night of a unique multi-cultural song summit in May of 2010. Gathering at a remote, 16th-century Danish castle built by alchemists, they rotated pairings during three days of intensive, three-hour writing and recording sessions. On the fourth day, they prepared for the show, and on the fifth, they shared their creations as part of Denmark’s SPOT Festival.

For all of them, the experience was magical, and as indelible as the ink on Malone’s arm. They testify about how those few days changed their lives in All I Know, a film by Holly Bronko that most recently aired at February’s International Folk Alliance Conference in Memphis. (A soundtrack and DVD are planned for release in the near future.) 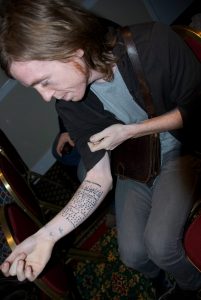 The film (executive-produced by Lone Star Music’s Zach and Megan Jennings) doesn’t delve into either organization’s history, or that of the moated Engelsholm Castle — in fact at first, as Bronko captures the paint-drying process of artists contemplating, it’s oddly quiet. Her single-camera, into-the-light shooting style also takes some getting used to, but once the music starts coming and the artists start expressing what the experience means to them, it becomes quite compelling.

“I’m a deeper person than I was before,” says Matt the Electrician. “I just know I’m, like, happy, and I wasn’t really a happy guy before.”

Rúnars, of Iceland, confesses, “I felt like a completely new person. And I knew the purpose of life.”

For Campbell, who created the House of Songs with Denmark’s Poul Krebs and Roar Amundsen, and co-produced the film with Amundsen, Bach’s words nail it best. “She said, ‘We came together as different people, but we became us. There was no them; it was us.’ Like we had our own world. And basically, it is. We’re one giant world, and we’re just collaborating.” 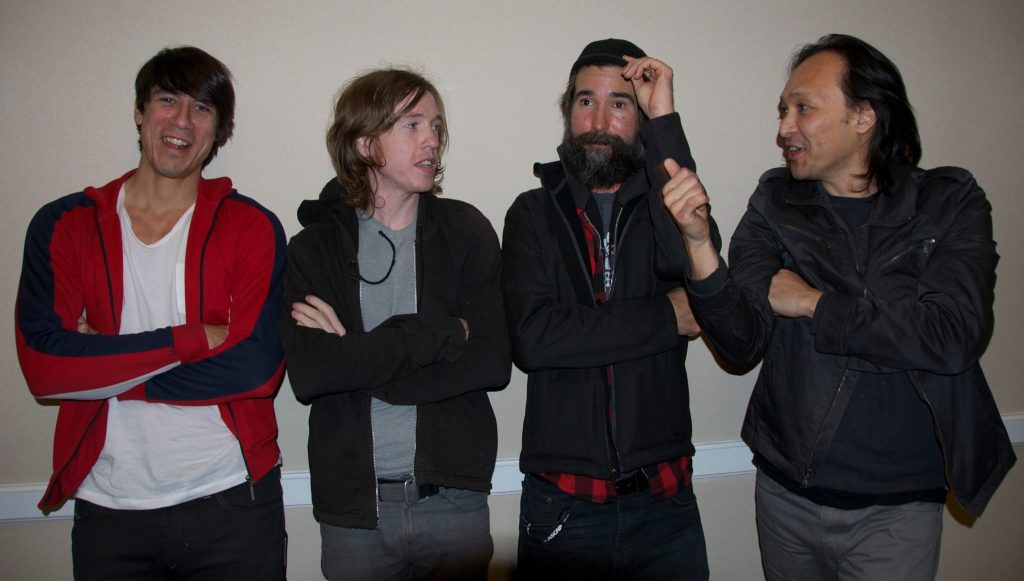 The Usual Suspects: Austin House of Songs mainstays and All I Know participants Nathan Felix, Danny Malone, Matt the Electrian, and Troy Campbell at Folk Alliance. (Photo by Lynne Margolis)

Though such collaborations might not teach the world to sing in perfect harmony, they do more than just make the participants feel good. There’s also a financial factor; Americans who score hits in Scandinavia collect higher royalties than they do in the U.S., along with building fan bases that translate into tour income. And if they earn a certain amount, they can join government-funded artist associations that offer perks like travel and project support.

The castle project itself is more or less an extension of an experience Campbell had in the late ‘90s, in which he was invited by Krebs, a star in Denmark, to a writers’ retreat at Song Island, actually the wind-powered Danish island of Samsø. The collaborative exchange meant so much to Campbell that when Krebs later sent emissaries to Austin to discuss establishing a creative partnership here, Campbell proposed a house in which two artists at a time would come for two weeks of total immersion. They told him to draw up a plan and a budget, then approved it with one caveat: they wanted him to do less work than he’d offered. “They said, ‘If you don’t remain an artist, it defeats the purpose,” Campbell recalls. “I nearly cried. I’d never been treated that way.”

He hired Felix to oversee household operations, and it’s gone so well, people from far-flung places are now asking, “How can we do this where we are?”

Jens Lysdal, vice president of the Danish Society for Jazz, Rock and Folk Composers, the House of Songs funding organization, is working with Campbell to spread the concept. Denmark, Norway, Sweden, Finland and Canada, all of which offer cultural funding to artists, and now, the City of Austin, are getting behind what Campbell calls “a creative export project.”

The nonprofit City of Songs will, Campbell says, “assist with the cultural export/import of creatives and build bridges between Austin and other creative city centers around the world.”

Adds Lysdal, “Basically, the idea is to connect, well, the whole world. That’s a big mouthful, but you know, people who are genuinely interested in writing good songs and stories have an interest in doing this.”

His group has done research that proves investing in creativity pays off.

“It’s astounding how much,” Lysdal says, adding, “A very big part of Austin’s appearance as a city is their culture. They’re very conscious about it. They don’t do it for the artist, they do it for the money, so it’s obvious it gets revenue back. The culture business, compared to the IT business, medical business and the high-tech business—compared to how much [it gives] back, it’s ridiculous how little [America puts] into it.

“There’s no reason for not loving it,” he notes. “Even people who are not directly involved want to chip in one way or another. It’s really growing fast and in a very harmonic way.”

Networking opportunities like the Folk Alliance and festival airings of the film are helping to spread the word, says Lysdal, who also credits Campbell for the program’s success.

Campbell says he’s just giving back what was given to him.