Miranda Lambert: “The Weight of These Wings” 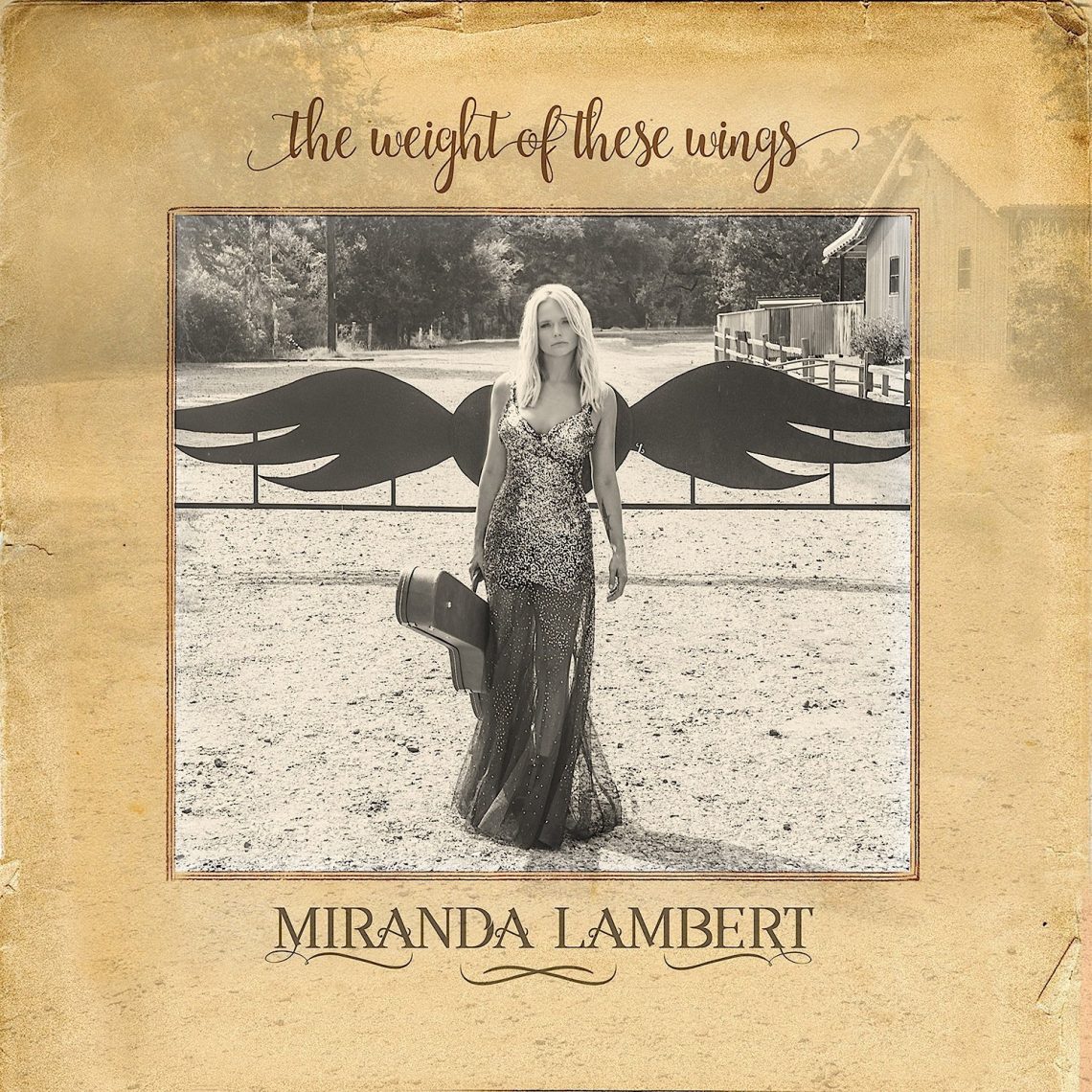 MIRANDA LAMBERT
The Weight of These Wings
Vanner Records/RCA Nashville

“Happiness ain’t prison/ But there’s freedom in a broken heart…” laments seven-time and recently deposed CMA Female Vocalist of the Year Miranda Lambert. The final exhale on The Weight of These Wing’s opener, “Runnin’ Just in Case,” is both steeped in the exhaustion of failure and basking in the sweet relief of done. Just as importantly, “Runnin’” is the siren’s cry of a restless woman who admits she’s not unpacked her suitcase since she “turned 21” — her song serving as a horizon line for the wildly ambitious and highly speculated upon double album follow-up to the aptly-named Platinum.

The peroxide blond Lambert has been a distaff side iconoclast since she came in third on Nashville Star. Along the way, she’s embraced the notion of “Crazy Ex-Girlfriend,” poured “Kerosene” on the trouble and waited, shaking with a cigarette in hand to do unto the one who loved then beat her with “Gun Powder & Lead.” Even her clever romp through Kacey Musgrave’s romantic meltdown, “Mama’s Broken Heart,” was more manic than sanguine.

Clearly, the owner of the Pink Pistol Boutique is no shrinking violet, and more than in touch with her most extreme emotions. It’s those emotions — as much as the brazen guitars and acetone soprano that can caress or separate a carcass from the bone — that make Lambert such an intriguing artist. In a world of two-dimensional superstars — Gretchen Wilson, Luke Bryan, Florida Georgia Line — Lambert proves the heart is indeed a mighty engine.

By now, every tabloid rumor and “informed conjecture” has bounced like a quarter on an Army cot. But for all the bounce of innuendo, in the end, right or wrong doesn’t matter as much as how she got here. Having opted to eschew the promo pony ring, avoiding interviews and forcing people to deal with the music, not only is the canny daughter of private investigators forcing people to contend with the music as they sift through it for clues, she’s creating a vacuum where the music can actually get in.

And what music it is. Lambert, whose glamazon throwdown “Something Bad’s About to Happen” with fellow large-lunged blond Carrie Underwood suggested a desire to veer to the mainstream, comes back with The Weight of These Wings stronger and more willing to go places most country stars wouldn’t dare. Whether it’s the “Spirit In The Sky- evoking “Pink Sunglasses,” with its guitar buzz and lurching rhythm offering a brashness evoking a bratty ZZ Top, or the punk-country strum of “Ugly Lights,” with its a kamikaze confession of the drunk girl we all fear, this is a whole other country. But it is country, and lays seamlessly against the minimalist steel-steeped “Well-Rested” or the  even more steel-strewn classic, Tammy Wynette-style lament “To Learn Her,” which comes off like a table-flipped “Stand By Your Man.” Lambert gets country in ways the mainstream’s not considered in years.

Yes, “Tomboy” sounds like the kind of girl empowerment homage one would expect from Kenny Chesney, and “Tin Man” veers dangerously close to her summer tourmate’s own breakthrough single of the same name. But Lambert is a mainstream country artist, after all, and the stumble shuffle “We Should Be Friends” feels like a pink solo cup singalong for the stadium set: laundry listing all the attributes the not-so-good-girls use to suss each other out. “I don’t know you well but I know that look / And I can judge the cover ’cause I wrote the book / on losing sleep and gaining weight / on pain and shame and crazy trains,” she gloats on the chorus. It’s the greatest losers’ lounge since Garth Brooks crashed a wedding raving about his “Friends in Low Places.” But where Brooks had clever wordplay, Lambert has a rhythmically sophisticated skeleton on which to let the band be tasteful and cheeky.

The beauty of The Weight is that Lambert clearly hasn’t lost her humor, nor collapsed like souffle into maudlin mainstream ballads. It’s shows that she’s found out how to be strident but engaging. Her take on Danny O’Keefe’s 1971 obscurity, “Covered Wagon,” is a slinky bit o’ swagger, conjuring a rejectionist revolution that is pure Airstream freedom. With the tart turned up in her voice, she blares, “People in the city ain’t got no use for me …” as the guitars twist and the drums tumble like a box of bullets down the stairs; but the sweetness of what she seeks tempers her escape.

It all moves slowly, meandering with lots of details and diversions. By the time the bass throbby, vocal layered “Six Degrees of Separation” comes up, Lambert seems less adrift and more an intentional rambler. Her “woUohah …” is savory, not sobby — and as the facts stack up, the random accidents add up to quite a life.

That life is what the Lindale, Texas girl is hellbent on living. Gone isn’t a state, it’s a destination — and one where she feels most at home. If the Lucinda Williams-invoking resonator guitar wavers and the little girl voice rises in what feels a prayer, don’t worry: beyond the lush harmonies and desert atmospherics, Lambert can take life on its terms. Exultant, she leans into the shimmery “I’ve Got Wheels” already moving onto her next adventure. Whatever stumbling blocks a girl living by rules of her own might find, they’re not worth troubling her mind. There’s the wind, the stars and the (Air)stream; after all the bumps, she now empirically knows that’s all she ever needs to get somewhere better down the line. — HOLLY GLEASON