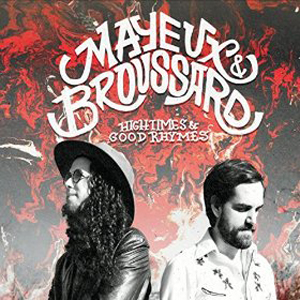 Brian Broussard is Texas born and although Tate Mayeux was born in Louisiana, he was raised in Texas. Both men grew up in families that loved country music, so naturally they rebelled against their upbringing and started playing in hardcore punk and metal bands. As they got older, they realized that country was not incompatible with the music they’d been playing and started writing hard rocking country tunes. The result is hard-edged country that echoes the punk/metal they were playing years ago, music that pushes country in a less polished, less Nashville direction. The tracks on High Times & Good Rhymes capture the intensity of the band’s live show, saluting their influences with tunes that range from hard rock to bluegrass.

A familiar foot-stompin’ rhythm makes “Stoned and Brokedown,” sound like Waylon Jennings fronting a hard-rock band, while the Luther Perkins-influenced surf guitar twang of “Back at Home” gives that tune a ragged Johnny Cash feel. “Bandera Baby” has a relentless swamp rock groove and uses a John Fogerty/Creedence Clearwater guitar hook to goose things along, but most of the album features the country/metal sound that Mayeux, Broussard and their band excel at. There’s plenty of dark humor in the lyrics of “Can’t Fall Off the Floor” a Cajun-flavored honky-tonk song that takes on self-destructive behavior with a devil-may-care backbeat and brittle twanging guitars. “One Way to Heaven” sports the kind witty wordplay that used to be common in country tunes: “There’s one way to Heaven and a 100 ways to hell.” Broussard’s screaming guitar and the rhythm section’s stomping kick drum accents drive the message home like a semi-flattening a roadside chicken coop. They get back to basics sending the traditional “Rollin’ in My Sweet Baby’s Arms” into overdrive with clanging guitars and Bennett Brown’s propulsive fiddling and “A Long Time Since You,” an acoustic bluegrass workout featuring Joe Sundell’s lighting fast banjo picking and a brief, impressive mandolin solo by Ben Hodges. It’s an old-fashioned she-done-me wrong song with a snarky chorus: “Well I’ve been high, and I’ve been low/Livin’ fast and dyin’ slow/It’s been a long, long time since you/and all the things you put me through.” — J. POET