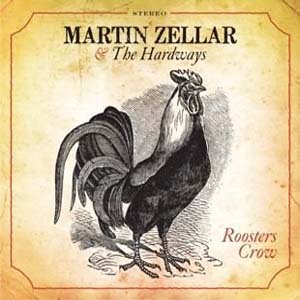 In a marginally more fair world, the Gear Daddies — pride of Austin, Minn., — would have made it at least as big as fellow Twin Cities alt-country forerunners the Jayhawks. On top of writing great, catchy songs, the Gear Daddies were most of all fun — unlike, say, those dour mopes in Uncle Tupelo. But the band bowed out after two very fine albums and one odds-and-sods collection (1988’s Let’s Go Scare Al, ’90’s Billy’s Live Bait, and ’92’s Can’t Have Nothing Nice), leaving frontman and principal songwriter Martin Zellar to carry on with a solo career. He’s recorded a handful of solid albums since then, most co-credited to his backing band the Hardways (a shifting lineup anchored by fellow former Gear Daddy Dominic Ciola on bass). It’s tempting to call Zellar’s latest, Roosters Crow, his best outing since the Gear Daddies’ glory days, but even a quick revisit of his previous solo albums proves that he never really lost his touch for marrying painfully bittersweet emotions to obscenely hummable hooks. Suffice it to say, though, Zellar (who now lives with his family in Mexico) remains in top form on Roosters Crow, which was recorded just outside of the other Austin at The Zone in Dripping Springs, Texas. The whole record is loaded with talented “locals,” with producer Pat Manske having rounded up such Texas heavies as Kevin McKinney, Lloyd Maines, Bukka Allen, Brian Standefer, Billy Bright, Michael Ramos, and Chojo Jacques to support the Hardways (paired down here to just Ciola and drummer Scott Wenum) and both Terri Hendrix and Kelly Willis to sing backup vocals on a pair of songs each. Zellar, in turn, brings 11 songs equal to the all-star occasion, the best of the bunch being the jangly loser’s lament “I’m That Problem,” the achingly wistful “Some Girls” and the cautiously optimistic closer, “It Works for Me.” Lyrically, Zellar’s grown a lot darker over the years, but then again he’s always sung the plight of the down and outs, even throughout the Gear Daddies’ peppiest sing-along choruses. Roosters Crow finds him a lot older and a fair deal more somber, but two decades on from Billy’s Live Bait and the unforgettable “Stupid Boy,” there’s still a buoyant kick to his voice and jangle to his melodies that always hits the spot. — RICHARD SKANSE