LSM’s Texas Progressive Country Showdown: The Final Four It's down to Willie, Townes, Ely and Guy for the semifinals 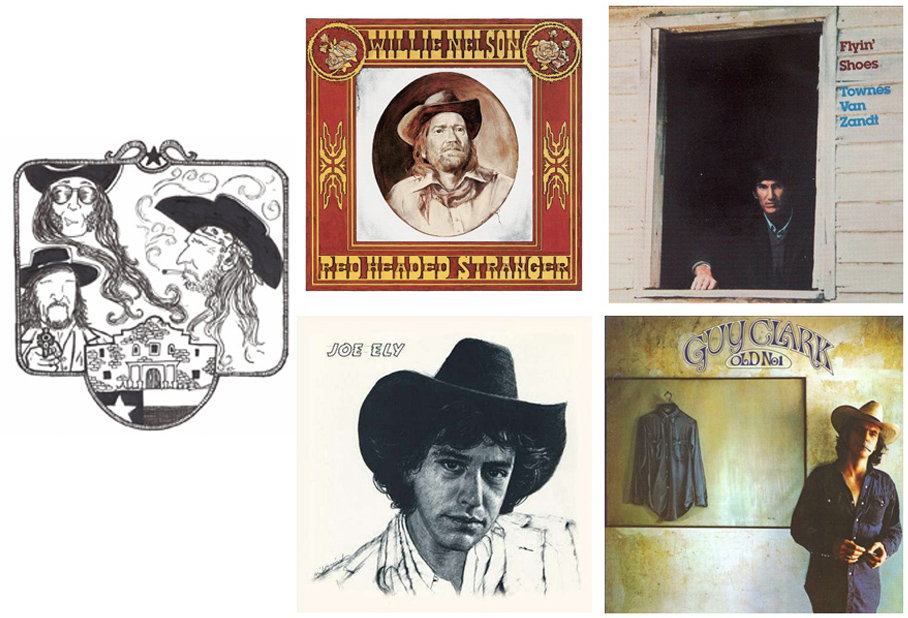 This is the tale of the Red Headed Stranger, and if he should pass your way …

Well, you know the drill: Don’t mess with his woman. Don’t be his woman and go messing around on him. And whatever the hell you do, do not, under any circumstances, touch the man’s horse. Oh, and if you happen to find yourself pitted against him in a single-elimination tournament of the greatest Texas progressive country albums of the ’70s, you best have your affairs in order because the odds are about as far from being in your favor as odds can get. Granted, the No. 16 seeded The Lost Gonzo Band was pretty much just a sacrificial lamb when matched against the most iconic of all iconic Willie Nelson albums in Round 1, with The Red Headed Stranger handily winning that one with 92.9% of the vote. But although the competition got a little tougher going forward, nobody could get quite close enough to make it even interesting: not Guy Clark’s Texas Cookin’, not the Flatlanders’ near-mythic debut, and most recently, not even Waylon Jennings’ fearsome Lonesome, On’ry & Mean. So with just the semifinals and finals left in this little showdown, we might as well just call the whole thing for Willie now and call it a night, yes?

Not so fast. Because who’ve we got facing The Red Headed Stranger this round? Townes Van Zandt’s Flyin’ Shoes. “Pfft,” you scoff. “Good songs on that one, sure, but that’s hardly the best album Townes ever made. Doesn’t stand a chance.” Oh yeah? Well, consider this: Townes entered this tourney with five different albums, and it’s Flyin’ Shoes that’s made it to the Final Four. Flyin’ Shoes, which in the very first round kicked Willie’s Shotgun Willie clear outta contention — and then proceeded to fly right over Terry Allen’s Juarez, Kris Kristofferson’s Kristofferson, and in our last round, Billy Joe Shaver’s Old Five and Dimers Like Me, which had just beaten Waylon’s mighty Honky Tonk Heroes. So before you call this round another cake walk for Willie … know that while Red Headed Stranger may be the more famous album and most popular album left in this tournament by far, all those diehard Townes fanatics who helped him advance to Round 2 with all five of his competing albums still in the hunt aren’t likely to be scared off by some trigger-happy preacher man prone to cryin’ in the rain. Especially knowing by know that even the very best of Willie albums can be beat.

To wit: Phases and Stages, the landmark Willie album released in ’74 — smack in between Shotgun Willie and Red Headed Stranger — that many consider to be not only country music’s first true concept album, but the greatest thing Willie’s ever made, period. Like Stranger, Phases made it easily all the way to Round 4 of the tournament, but that was all she wrote: It was beaten — and rather soundly, too, 69.7% to 30.3% — by the self-titled 1977 debut by Lubbock maverick (and once and future Flatlander) Joe Ely.

What that means is, even if Red Headed Stranger holds off the scrappy Flyin’ Shoes to advance to the Finals, there will be no ultimate Willie vs. Willie showdown. Just as there’s no Ely vs. Ely matchup in this round: Joe Ely may have made it to the semis, but the equally excellent Honky Tonk Masquerade just couldn’t quite pull off a Round 4 upset over Old No. 1, the bullet-proof 1975 debut by the late, great Guy Clark. It was actually pretty close, though, with the Clark album beating Ely’s by  just 5.2% of the vote. And given that both of his albums were on the same side of the bracket, Ely now gets an immediate chance for a rematch. Can Joe Ely prevail against Guy Clark’s masterclass in Texas songwriting where Honky Tonk Masquerade fell just short? Or will it be Guy advancing to the Finals to face either his old friend Townes or Willie?

Click on the “Vote Now” button on the image below if you’re on a mobile device or on any of the match-ups if you’re on a computer, and pick away. And remember, you can vote once a day, so be sure to check back!