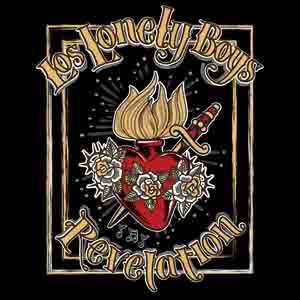 At first glance, Revelation seems like a pretty bold title for a Los Lonely Boys album — at least now, a decade on from the self-titled debut that catapulted the Brothers Garza from sleepy San Angelo, Texas to the top of the national pop charts and scored them a Grammy for their inescapable smash single, “Heaven.” The novelty back then of a young band of brothers who grew up playing in their father’s band and loving the sounds of Stevie Ray Vaughan, Willie Nelson, and the Beatles in equal measures was as appealing as the brotherly harmonies that sweetened their own brand of Double Trouble-style Texas blues rock (or, in the case of “Heaven,” smooth, Santana-style secretary rock.) But as their major-label follow-ups Sacred and Forgiven offered up more or less more of the same with diminishing commercial returns, interest waned, the spotlight drifted, and subsequent indie releases like a covers EP and a live acoustic album didn’t exactly scream for the attention of anyone but diehards. So pardon the shock of this lapsed believer — who admittedly skipped out on the band’s last outing, 2011’s Rockpango, too — but damned if Revelation actually is a revelation, packed end-to-end with the kind of eclectic pop smarts and surprising arrangements that demand a whole new level of respect for brothers Henry, JoJo, and Ringo. That Los Lonely Boys were legitimately talented was apparent from the get-go, but even in the glow of their initial flush of fame, they came across as precocious one-or-two-trick ponies. But the head-spinning range of styles so effortlessly at play here makes a compelling case for calling Revelation the Garza Brothers’ very own Rubber Soul. Sure, some of this stuff you’ve heard them do before: the textbook roadhouse blues of “Can’t Slow Down,” the sweet, smooth Latin/Motown soul of “So Sensual,” maybe even the Van Halen-leaning hard rock of “Rule the World” — but they’ve never done any of it better, and that’s just the filler. Everything else hits like a blast of fresh air, from the flat-out terrific, Doug Sahm-worthy opener, “Blame It On Love” (one of three songs on the album co-written with Radney Foster) to the baroque flourishes of the irresistible pop gem, “There’s Always Tomorrow,” to the winsome, McCartneyesque closer, “Everything About You.” Still owing that aforementioned Rockpango a belated first listen, I’ll stop shy of calling this Los Lonely Boys’ finest hour — but suffice it to say, Revelation is reason enough on its own to spin the spotlight back in their direction. — RICHARD SKANSE

Previous post Laura Cantrell: "No Way There From Here"