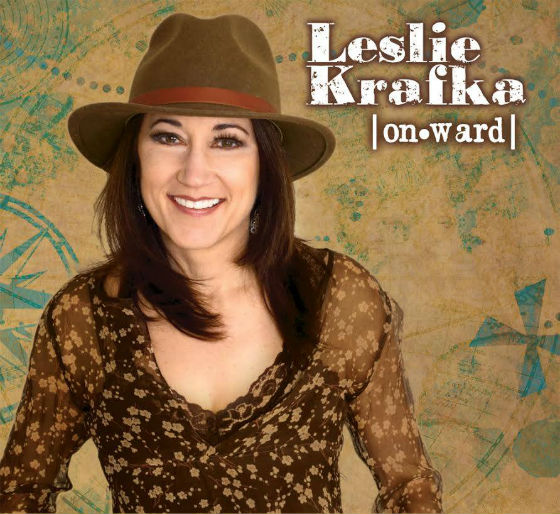 Houston’s Leslie Krafka is proof that it’s never too late to find your true calling. A few short years ago, she attended a songwriting workshop taught by Terri Hendrix and Lloyd Maines — not to further hone her craft or learn new tricks, but rather, by her own admission, because she thought it would be fun (she’d long been a fan of the duo.) But she came away from that workshop with her very first song and, apparently, an addiction to both writing and performing that by 2010 found her nabbing both Songwriter of the Year and Song of the Year honors from the Houston Songwriter’s Association. Not bad at all for a start (especially for such a late one); but Onward, her second album, is where Krafka really arrives. Produced by Maines and Hendrix at the Zone in Dripping Springs, the whole record sounds fantastic, crisp and full (but never cluttered) and impeccably played by such A-list pros as Richard Bowden, Riley Osbourne, Bukka Allen, David Spencer, Rick Richards, and Pat Manske (not to mention Maines on his generous pedal steel and Hendrix on harmonica and harmony vocals). But Krafka, despite being a rookie separated by that formidable bunch by decades of collective experience, holds her own all the way through with conviction to spare. Her voice alone is a real find: sweet but assertive and ribboned with color, it glistens through “Beauty,” swaggers sassily through “Whiskey High,” and settles like a golden-red sunset over the river of pedal steel on “South Texas Fall.” Her songs are real winners, too, full of buoyant melodies that never sag or drag and lyrics that convey both maturity and a young-at-heart spirit that’s playful but never fluffy. Best of all, though, is the way she handles herself on the album’s one cover, “Drunken Poet’s Dream.” Memo to Ray Wylie Hubbard and Hayes Carll: hate to tell you this, boys, but while you were sleeping, that woman done stole your song. — RICHARD SKANSE