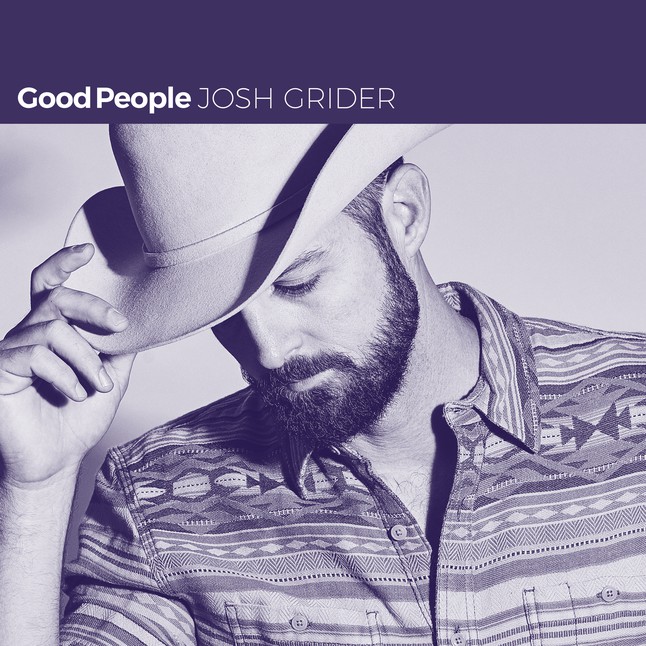 Singer-songwriter Josh Grider has had a foothold on the Texas independent music scene for years, a reliable if sometimes-overlooked presence, well-respected by many of his fellow musicians and bolstered by thousands of fans even if it’s not to the venue-packing level some of his peers have enjoyed. There’s still time, though, and Grider’s latest full-length effort, Good People, makes as good a case as any for his gifts.

Despite the impressive baritone twang, Grider’s not really an old-school revivalist, and he’s not really an alt-country experimenter either: mainly, he falls somewhere in between the straightforward modern country music of Aaron Watson and Cody Johnson and the more meditative, writerly approach of his longtime friends and collaborators Walt Wilkins and Drew Kennedy. All of this makes him uniquely well-suited for the audience of folks who came of age in the Pat Green-era rush of party-hearty anthems, but whose current thoughts have turned from keggers and hook-ups to enduring love and hopeful self-reflection. Grider is right there with you, and the soulful gratitude evident in his best songs is heartening.

Good People‘s title track, released as the album’s first single, is a brisk and tuneful reminder that modern media-driven vitriol and shallowness is offset by a deep well of quiet decency and dignity that deserves more attention. Most of his other songs walk the walk, with standouts like the resilient opener “Let the Bad Times Roll” and the near-worshipful “A Woman” speaking to the better angels of human nature.  The heartsick narrator of “Less and Less” is hanging in there the best they can, and “Sex and Alcohol” looks askance at modern-day madness and anxiety with a bemused chuckle instead of slinging its own handful of judgmental mud. It’s not the deepest take, but the bluesy bounce and Roger Miller-esque breakdown in the middle elevate it.

The production (courtesy of Bobby Hamrick) hits the right mix of consistency and variety, weaving a bit of R&B bounce into the radio-friendly country textures and leaving some room for Grider’s jazz-inflected guitar picking. The album’s bigger triumphs include the bracing “My First Band,” drawing the parallels between ill-fated young love and rock-star ambitions with the lived-in wisdom of someone who’s been through both, and the ruminative “Pictures Do.” Sort of a more autumnal answer to Jamey Johnson’s modern classic “In Color,” it gives a four-minute treatise on the power of memory and the sanctity of family, serving up plainspoken affection without veering into the maudlin. And the less memorable songs have their charms, too: the sugary buzz of “Local Honey” might wear off pretty quick, but the whistling hook sticks to the ears nicely.

If an edge of angst, defiance, and despair are prerequisites for your musical enjoyment, Grider’s downhome charms might not move you much. But if you’re in the market for a poet of optimism and maturity, bending modern country music to his good-natured will, he’s one of the best at it. — MIKE ETHAN MESSICK

Next post Courtney Marie Andrews: "May Your Kindness Remain"

Previous post 2018 Luck Reunion: It's just better out there