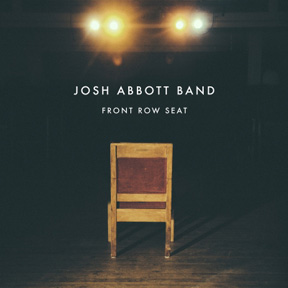 Let’s say this much right up front: Front Row Seat, the latest full-length from the Josh Abbott Band, is easily the sorority slayers’ best effort to date. Granted, some will take such a declaration with a smirk, which is to be expected given Abbott’s status as not just one of the most popular artists on the Texas country scene of the last decade, but also its most polarizing. While there’s no denying the JAB’s success both in Texas and beyond (with 2012’s Small Town Family Dream having cracked the Top 5 of the Billboard country chart), the mainstream appeal of songs like “She’s Like Texas” and “Touch” has not always translated to scene cred. But while the cynical set may well be inclined to dismiss the equally polished and relentlessly hook-filled Front Row Seat out of hand, those who come to the record with an open mind just might be surprised to find as much substance as style.

Framed as a story in five acts (“Exposition,” “Incitation,” “Intimacy,” “Dissolution,” and “Denouement”), Front Row Seat is — as was well publicized before its release — Abbott’s “divorce album.” And the intensely personal nature of many of the songs here should come as no surprise to anyone who followed the infamously outspoken singer’s airing of his adulterous laundry on Twitter; nor, for that matter, should the fact that every song on the album is built for slick mass consumption. Whether you love Abbott or hate him (or love to hate him), it’s hard not to marvel at the way he manages to have his cake and eat it, too: it’s no small artistic achievement to construct a cohesive concept album out of songs that (mostly) all sound like potential singles — and far more of the 16 songs here are hits than misses.

Through much of the record, JAB reveals itself as the fiddle, banjo and roots-flavored group of its earliest days — most specifically on the carefree, puppy-lust oriented opener “While I’m Young” and the equally accessible second track, “I’ve Been Known.” The uptempo first act closes with the spirited “Live It While You Got It,” in which Abbott sings about stripping before splashing into a fountain, no lucky pennies needed. The optimistic mood carries over into the second and third acts, culminating in the album’s title track, a steamy love song in which Abbott sings uninhibitedly about “tingling our tongues.” If that line sounds a little icky or awkward (albeit not quite as much as Abbott’s infamous “her heart is a river in my blood” line from the last album’s “She Will Be Free”), rest assured that the ensuing “Dissolution” section delivers on its promise of full-on despair and heartbreak. In “Born to Break Your Heart,” a soft-rock sheen is applied over crawling acoustic instrumentation in order to accent the sensitive, tender nature of the song’s sad sentiment: “I blame myself, I could’ve told you sooner,” Abbott confesses, “Now it’s too late to warn you, I’m already gone.” And by the time “Amnesia” rolls around in Act 5, not even tequila is enough to kill painful memories.

“Amnesia” really is the darkest song Abbott’s ever written and recorded, it’s also easily one of his very best and most mature. How it fell just short of really taking off on adult contemporary Top 40 radio is baffling, really, but it still made for a compelling lead single and its placement near the very end of the record only deepens its emotional impact. Nostalgia, libidinous youthfulness, stinging loss, illogical mistakes and the lessons we hopefully learn from them can be powerful fuels for art, and more often than not on Front Row Seat, Abbott and his band sound duly inspired and confident enough to both embrace their proven strengths and explore new horizons. Where they go from here — literally, for their next “act” — is genuinely intriguing. — KELLY DEARMORE