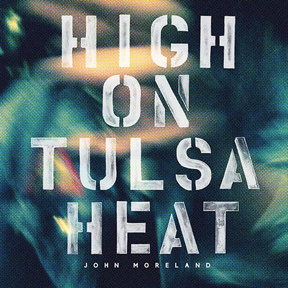 There’s a reasonable saying that when the addiction goes, the addict remains. John Moreland’s latest, High On Tulsa Heat, underscores this idea as it offers hope on the horizon but still labors to reach it. The album is sparse yet vivid, like a pastoral elegy, with stark instrumentation that makes ears notice when new players join the landscape. As his lyrics explain on “Heart’s Too Heavy,” “sometimes love is a losing game,” but if Moreland has put pen to paper to tune, the game must be worthy of the loss. Moreland is a master of mining catharsis through songwriting, which accounts for why he is already regarded by many as one of the most compelling poetic voices of his generation on either side of the Red River and beyond; the guy’s as eloquent as Hubbard but dark as Poe. The 10 tracks enclosed here are all frailty and struggle, but Moreland never sounds like Nietzsche spouting hopelessness; he paints underdogs rather than tragedies. On “Sad Baptist Rain,” he sings, “The devil ain’t nearly as real as he seems/Your name is a number I see in my dreams/Your heart is a dangerous beautiful thing/I keep losing it.” As he seems so exposed in his song, sharing in Moreland’s performance becomes a therapeutic experience for a listener. And even as his voice erodes and crags and his lyrics weep for the universal unfairness of life, the message he ultimately leaves you with is one of tender optimism. — CODY OXLEY