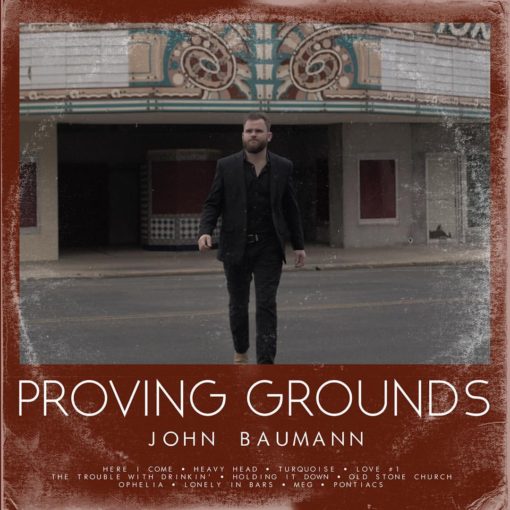 If you’re gonna invoke the hallowed likes of Terry Allen, Joe Ely, Butch Hancock, and Jimmie Dale Gilmore by name in a song, citing them all as formative influences on your own writing, you damn well better measure up and have something worthwhile to say. The same goes for any singer-songwriter not named Dylan (or Hancock, for that matter) who insists on stretching a song out to nine minutes, at least without the formidable backup of the E Street Band and an arena full of fervent converts predisposed to welcoming that kind of indulgence. So, props to John Baumann right off the bat not just for having the Texas-sized balls to take on both of those challenges on his latest record, but for proving himself to be, if not yet the equal of his Lubbock heroes, then at the very least heading in the right direction with as much promise as confidence in his stride. And to his credit, Baumann makes it clear that he knows right where he is on that journey, too. In “Here I Come,” the arresting mission statement that opens the aptly-titled Proving Grounds, the hungry young contender takes stock of his burgeoning troubadour career (this is his second full-length release) and stoically reckons, “It’s too soon for accolades, and too late to quit.” Ten songs later, the closing “Pontiacs” finds him assessing life at 29 with a similarly mature, in-it-for-the-long-haul sense of purpose. After waxing nostalgic for most of the song’s leisurely running time, flipping through snapshot memories of childhood and early adulthood, he stares down the impending big 3-0 and “years to go” both wary and ready: “As I look back on the halcyon days of my youth, every day I am closer to finding the truth.”

Those two bookend tracks alone, each dusted with tastefully atmospheric production by Justin Pollard that subtly recalls T Bone Burnett’s work on Jimmie Dale Gilmore’s 1996 album Braver New World, help set Baumann apart from most of his millennial peers on the current Texas scene — even though there’s plenty in the middle of the record that suggests he’s still got a ways to go before he catches up to his Flatlander idols, let alone even a contemporary like Okie wunderkind John Fullbright. When Baumann turns his attention to melodically pleasing but not especially distinctive love songs (“Turquoise,” “Love #1”) or ditties about getting wasted (whether his own “Heavy Head” or Aaron Lee Tasjan’s “The Trouble with Drinkin’”), he sorta blends back into the Kyle Park/Josh Abbott crowd. But the frank, honest empathy of “Lonely in Bars” and the stunningly somber, nuanced reckoning of “Old Stone Church” are just enough to keep the judgment scales tipped in favor of “keep an eye on this guy.” Too soon for accolades? Nah. More like right on time. And so long as he keeps gunning for the horizon and doesn’t succumb to the middle of the road, there oughta be a lot more of ’em coming not too far down the line. — RICHARD SKANSE

Previous post Steve Earle & the Dukes: "So You Wanna Be an Outlaw"