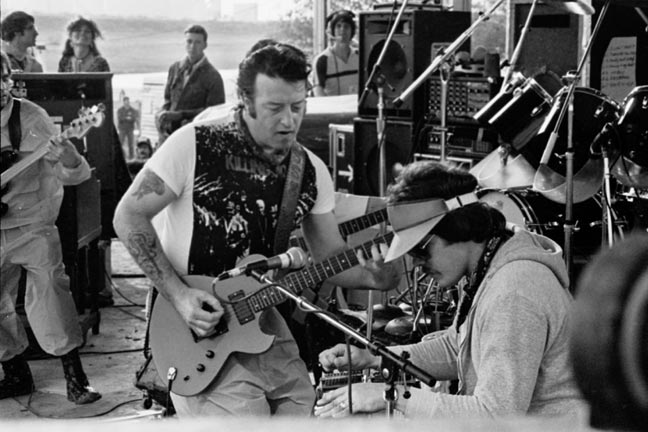 “Jesse and Lloyd! Lloyd and Jesse!” the woman at the front of the stage repeated to the point of hysteria. Lloyd Maines sat behind his pedal steel, smiling at his compadres as the lady continued on. Maines recounted this night with a mix of embarrassment and pride in a tribute to his late friend and partner of musical mayhem, Jesse “Guitar” Taylor, that ran in the April 2006 edition of 3rd Coast Music. The two Lubbock musicians had carved out a legendary body of work by backing Joe Ely (and occasionally the eccentric Lubbock artist/songwriter Terry Allen), trading off head-spinning solos and twin leads as if they could read one another’s minds. Obnoxious as the screaming could get, it was an honor to be recognized as a team. 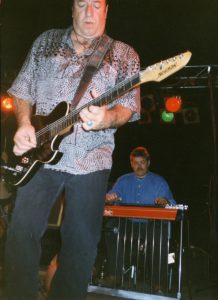 Original music hadn’t figured much into Maines’ life prior to hooking up with Ely. He’d honed his considerable chops playing traditional country music at VFW halls and rodeos with his family band, the Maines Brothers. Working at Don Caldwell’s Lubbock recording studio, he’d hired Ely, a friend of a friend, to play harmonica on a country gospel recording. Back in Lubbock after a few seasons of wandering, Ely sat down to work on the unheard songs he was carrying around. He immediately thought of the steel guitarist when putting a group together to back him on a gig at the Main Street Saloon. “Lloyd said, ‘Nobody will come listen to your songs if you aren’t playing top 40 country, this is Lubbock,’” Ely remembers with a laugh. “But I’ll be damned if we didn’t work out these songs and start really drawing a crowd.”

The band clicked, and after a year of playing regular gigs, including opening for B.W. Stevenson and Jerry Jeff Walker, a record deal with MCA was in the works. But fiddler/guitarist Rick Hulett decided he wasn’t interested in a life on the road and left the band. That’s when Ely called on fellow musical traveler Taylor.

Taylor first entered Ely’s orbit on the Southern California coast. “I was bumming around Venice, sleeping on the beach,” Ely recalls. “I heard these guys talking on the boardwalk, and I said, ‘Those guys sound like they’re from Lubbock.’ You just could not disguise it, especially Jesse. I walked up and told them, ‘I know you are from somewhere within 100 miles of Lubbock.’ They were all a little shocked, then introduced themselves. That’s when I first met Jesse.

“Later I saw him back in Lubbock, hanging around the club scene,” Ely continues. “I saw him kind of progress and just get better and better. He played with Krackerjack, just a killer rockin’ blues band.” Maines recounts how the addition of Taylor to the young Joe Ely Band really took things up a notch. For one, the guitarist brought a Freddie King-inspired blues-rock edge to the combo; for another, because he was deaf in one ear from a near fatal car crash, Taylor played really, really loud.

The band rehearsed incessantly at Ely’s house during the day, working the songs up with beginnings, middles and ends. Ely had done enough time as a solo folksinger that he knew if he was going to have a band it would have to be a cohesive unit, rather than just a bunch of guys jamming around.

Producer Chip Young came to see the group in Lubbock at the original Stubb’s BBQ at 108 E. Broadway. Impressed with the musicianship displayed, he offered them the rare opportunity to showcase their own sound on a major-label country album. The first album, 1977’s Joe Ely, is an amazing combination of musical energy and sensitivity. “Lloyd understands harmony, and Jesse, well he was basically a blues player, but he was so good on the guitar he was immediately attracted to what Lloyd was doing,” Ely says. “They came up with some stuff playing together that was sort of similar to the early Allman Brothers, but it had this honky-tonk vibe that made it sound like a dancehall on fire.”

Maines remembers coming up with the lightning-speed triplet figure that opens the debut album’s “All My Love.” “Jesse heard me play that and jumped right in,” he says — creating a kind of signature riff that would kick off many musical highpoints throughout the band’s catalog. 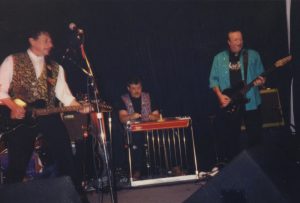 The two guitarists became fast friends and often roommates on the road. The sympathetic similarities and differences in their playing were echoed in their personalities. Both were built more like farmhands than rock stars, but Maines is often characterized as a thoughtful, organized, stable family man, whereas Taylor was known for hopping trains, hard drinking and a willingness to put up his fists to defend those he cared about. “Jesse would scare you to death,” Ely says “but he was just the sweetest guy.”

Both men were full of contradictions. Maines, despite his hard-country dancehall background, could pull out the stops and make his pedal steel scream as fiercely as any rock ’n’ roll player. And Taylor, for all his tough upbringing and occasional legal run-ins, was the intellectual of the group, a well-read seeker of knowledge who could converse on just about any subject.

Both men came from musical families; Taylor’s father, Homer, even played some with Maines’ uncles in the ’50s. But whereas Maines grew up playing alongside his father and uncles, Taylor’s dad abandoned his family when Jesse was still a boy. Taylor had heard his dad lived in the small West Texas town of Cisco, close to the intersection of Interstate 20 and US 183. On their way back to Lubbock from a Terry Allen gig in Tyler, Maines woke up the sleeping Taylor and asked if he wanted to try to reach out to his father. Looking through a gas station phone book they found a number for his paternal grandmother. His dad answered the phone and as if the past 18 years hadn’t happened, he invited his son over. Maines remembers Taylor’s trepidation, not knowing if he was going to slug his dad or hug him.

“His dad came out of the house with little bits of tissue on his face where he had cut himself shaving,” Maines says. “I’m sure he was nervous. Jesse shook his hand and gave him a big hug.Jesse was just that way — no malice. We went in and had coffee and pie.” Homer would remain a part of Jesse’s life until he died a few years later. Maines says he was glad to be there with his friend and musical partner when it all unfolded, as that was exactly the kind of shared experience that fed the telepathy the two would always have musically. 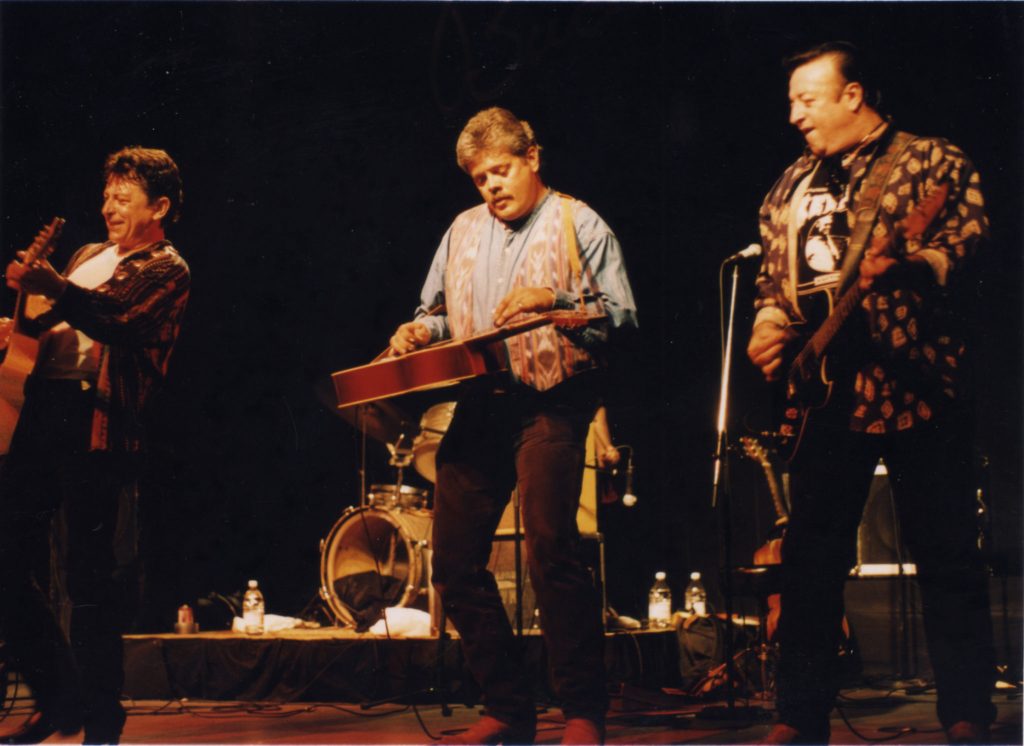 “It became apparent we would never fess up to any limitations,” Maines says, recounting how the band made crowd-pleasing rave-ups out of Bob Wills’ classics “Stay All Night” and “Take Me Back To Tulsa,” as well as Duke Ellington’s complex “Caravan” and their own powerhouse take on the Woody Woodpecker theme, dubbed “Peckerwood Polka.” The catalog of original songs the band worked up for their albums shone just as bright in the live show. After three stellar albums, they made what is to some the ultimate roots-rock statement, Live Shots, recorded in London while touring with the Clash.

Relocating to the more urban environment of Austin, the band cut the original guitar team’s final album, Musta Notta Gotta Lotta. Before long the group splintered, as Maines chose home life over the rigors of the road and Taylor quit the band on New Years Eve, 1982. But the end of the original Joe Ely Band was not the end of the musical partnerships formed in those long rehearsals and refined over thousands of miles together. Along with Ely Band accordionist Ponty Bone, Maines and Taylor continued to work together behind Terry Allen, whose seminal 1979 album, Lubbock (On Everything) was the first of many albums Maines would end up producing. Maines, Taylor and Ponty Bone also performed on Allen’s Smokin’ the Dummy and Bloodlines albums in the ’80s. Maines also contributed pedal steel to Taylor’s solo album, Last Night. And when Maines produced an independent recording for the promising young country rocker Will T. Massey in the late-80s, he called on Taylor to recreate some of the fire they’d lit with Ely. 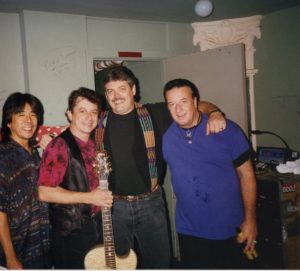 By the late-90s, the many twists and turns of Ely’s career had brought the guitar team full circle. On a couple of January 1999 nights in Austin, their longtime association hit its pinnacle of intensity and depth. Live @ Antone’s showcases the two wizened warriors lifting material from across Ely’s catalog to dramatic heights. But shortly after the live disc, the band once again wandered off in different directions. Taylor toured with Calvin Russell and Billy Joe Shaver. With longtime friend and mentor Johnny X Reed, he recorded the fantastic instrumental album, Southside Guitars, before passing away in March of 2006, just shy of his 56th birthday.

Maines, meanwhile, continued touring year-round with San Marcos singer-songwriter Terri Hendrix, who he started working with in 1997 and continues to play with more than a decade later. A veteran of countless recording sessions, he’s also carved out a career as one of the most sought-after producers in the country, folk, Texas and Americana music scenes, even winning a Grammy for his work on Home, the 2002 album by his daughter Natalie’s band, the Dixie Chicks. But for all of his own acclaim and success, he’s quick to give credit to his friends Ely and Taylor for pushing him to become the musician he is. Because it was in those early days with the Joe Ely Band that Maines began to really see his role in putting songs together — where to lay back, and where to explode.

“With Jesse and Joe, you knew if you don’t come to really play … just go home,” Maines says. “It was that simple.”