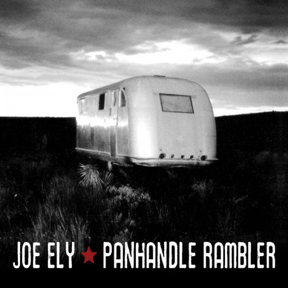 Out of all the living legends of Texas and Americana music to tumble out of Lubbock in the early to mid-70s — most notably kindred spirits Butch Hancock, Jimmie Dale Gilmore, and Terry Allen — Joe Ely has long been the one most driven and defined by an insatiable wanderlust, even before the Flatlanders recorded their first album in ’72. But no matter how far and wide he’s roamed, time and again he’s returned back to his Panhandle point of origin to reboot and recharge his muse. As he explained to Lone Star Music back in 2011, “That horizon just gives me a sense of freedom that I can get away with anything” — which is why the longtime Austin resident makes that pilgrimage back “home” every time he feels the itch to begin a new record. And yet, somehow it took the guy the better part of 40 years to get around to naming an album Panhandle Rambler — a title that actually fits Ely himself better than “Flatlander” or even, for that matter, “Official Texas State Musician.”

Turns out that title fits the record just right, too, neatly framing a dozen songs that fit together thematically like a map of both the West Texas landscape and of Ely’s epic decades-spanning musical ramble. “Wounded Creek” and “Coyotes are Howlin’” bring Dutch flamenco guitarist Teye Wijnterp back to the fold to revisit the sepia-toned, cinematic Spanish mystery of 1995’s Letter to Laredo and half of ’98’s Twistin’ in the Wind, while “When the Nights are Cold” and “Early in the Mornin’” steer closer to Tex-Mex with Ely’s go-to duo partner of late, accordion-player Joel Guzman, riding shotgun. “Southern Eyes” and “Here’s to the Weary,” meanwhile, recall the spirited honky-tonk masquerade of Ely’s early MCA albums, “Wonderin’ Where” and “You Saved Me” evoke the sophisticated roots-rock of Dig All Night and Love and Danger, and even the musical play Chippy (look it up, it’s worth it!) gets a nod via a fresh take on “Cold Black Hammer.”

On first spin, that wide mix of styles here feels a bit like an Ely compilation on shuffle, but closer attention to the lyrics and sequencing reveals multiple thematic arcs running as straight and true as train tracks from start to finish. It’s by no means a full-on concept album, a la Terry Allen’s Juarez, but the songs all neatly complement each other — even the two covers, Guy Clark’s “Magdalene” and Butch Hancock’s “When the Nights are Cold” — in subtle but intriguing fashion, not unlike Allen’s Lubbock (on everything). And although one can still quibble about this being the first Ely album to lack an outright for-lack-of-a-better-word “rocker” (the terrific “Here’s to the Weary” picks up the tempo a fair bit but swings more than floors it), Panhandle Rambler only gets richer and deeper with each return visit. It’s no wonder why Ely keeps going back there himself. — RICHARD SKANSE