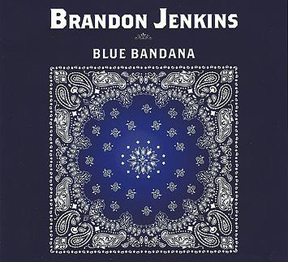 Brandon Jenkins bills himself as a “Red Dirt Legend.” It’s a cheeky move, but he has the performing and songwriting chops to live up to his self-proclaimed title. There’s not much information on the package that comes with Blue Bandana. Jenkins says it’s an unpolished album and wants the music to speak for itself — and it does, in many shades of blue and deep indigo. His voice, always raw and intimate, lays bare the most vulnerable places of the soul supported by his subtle acoustic guitar work and a band that’s mixed down to a secondary role. Jenkins begins by bemoaning the inability to attain true love. “I hear your name and my mod ring turns to black,” he quips on “Black Mood Ring,” holding a funeral for another lost relationship. “She Likes to Ride” is a bluesy country tune that gives you the impression of a jilted lover spying on his ex and her new boyfriend in their most intimate moments. “Under the Shadow of the Refinery” is a harrowing look at life in a factory town and the diminished dreams the workers cling to in order to survive the daily grind. A haunted fiddle plays behind Jenkins on “The Path,” another hopeless song that likens life’s path to a road that keeps going down toward a dark, uncertain future. The tempos are uniformly slow, the acoustic guitar minimal and the vocals quietly tortured. One of the album’s last songs is “Don’t Hold On to the Past   ,” an ironic sentiment coming in the wake of eight songs that have wallowed in anguished heartache and the bitter knowledge of life’s limitations. But like all good folk singers that mine the arbitrary restrictions that have been placed on working class people by an unfair system, Jenkins always presents his observations with an uplifting power that reinforces the dignity of our everyday struggles. — J. POET