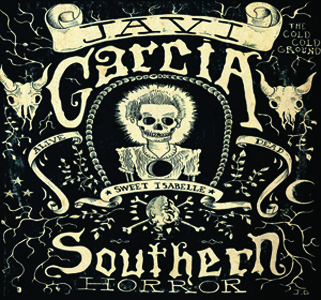 On the first pass through this album, you might think Javi Garcia is one seriously pissed-off dude. By the second listen, you might revise that theory: He may not necessarily be pissed off, but you certainly wouldn’t want to be the poor bastard that got on his bad side. Garcia, originally from Weslaco, Texas, refuses to compromise with his music, so if the words “goddamn,” “whore” and “shit” offend you, well, tough shit; if radio stations don’t play A Southern Horror, that’s their loss, not his. He doesn’t pull punches when it comes to his subject matter and characters, either. Here, you’ll find spousal abuse in “Comal County River,” a crippled vet who picks Iraq over food stamps in “God and Country” and a restless soul who gets tamed by a “Voodoo Queen.” A breakup is never pretty, but the one in “Flood” is downright brutal: “You want me to write it in blood/and you beg me to swear on my life/If you want to see blood, just hand me a knife.” And with “Weight of the Gun,” Garcia even explores the double standards we inflict on our policemen: “You call me a narc, you call me a pig/you call me when your boyfriend’s beating your kids.” Guest musicians Mike McClure, Luke Leverett, Austin Gilliam, Redd Volkaert, Brady Black and Todd Laningham add grit and gusto in all the right places, but they’re all just gravy; Garcia and his band, the Cold Cold Ground, more than hold their own, from the hard-rocking “Black Tambourine” (as thrilling and swaggering as the Rolling Stones at their drugged-out best) through the sharp turn of the bluegrass-fuelled “As Wicked as You” to the flat-out ferocious “Waking Snakes.” A Southern Horror is definitely not for the faint of heart, but if you’ve got what it takes to hold on, it’s a riveting and unforgettable ride. — DALE MARTIN

Next post Kristen Kelly and the Modern Day Drifters: "Placekeeper"