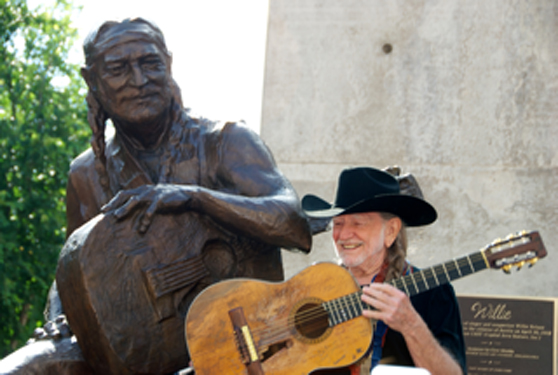 The fact that Willie Nelson was performing in a Johnny Cash tribute at ACL Live at the Moody Theater on April 20 happened to be coincidence. But when the date’s significance was noted by city officials and Capital Area Statues Inc., the nonprofit organization that bestowed Austin with a bronze version of its outlaw-country hero, they couldn’t resist rolling with it, so to speak.

As cannabis fans know, 420 — the number, hour and date — serve as references to pot smoking, an activity of which Nelson is famously fond. Which made it the perfect time to dedicate Willie’s 8-foot-tall, 1-ton likeness at Willie Nelson Boulevard and Lavaca Street, in a plaza joining the W hotel and the theater he helped fund. The fact that his 79th birthday fell 10 days later made it even more appropriate.

With the scent of herb wafting through a crowd of more than 1,000, CAST board president Lawrence Wright pointed out that the privately funded statue sat at the foot of a staircase leading to the Austin City Limits studio, “the very embodiment of the live music capital of the world.”

Nelson, he noted, was the show’s first performer. 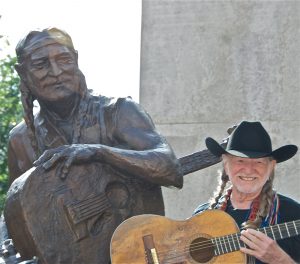 Nelson’s buddy Kris Kristofferson, who would later perform a Highwaymen reunion of sorts with Nelson, Jamey Johnson and Shooter Jennings, son of the late Waylon Jennings, said he never would have believed 40 years ago that he’d be involved in unveiling a Willie Nelson statue in 2012. Calling Nelson “unmatched at being a great guitar player, a great singer and absolutely great songwriter,” Kristofferson joked, “I won’t tell you what else Willie’s been.”

As Nelson inspected the benevolent-looking visage created by Philadelphia artist Clete Shields, he asked, “What time is it? I can feel it’s gettin’ close to something!”

After giving his own thank-yous, he called bandmates and family members to the stage, including sons Lukas and Micah, who accompany him on his new album, Heroes. They performed “On the Road Again” and of course, “Roll Me Up and Smoke Me When I Die.”

Had they chiseled the statue in marble, he literally could have been stoned forever.