In Profile: Nikki Lane How fate, luck, and hard work conspired to turn a flea market fashion designer into a rising star of Americana. 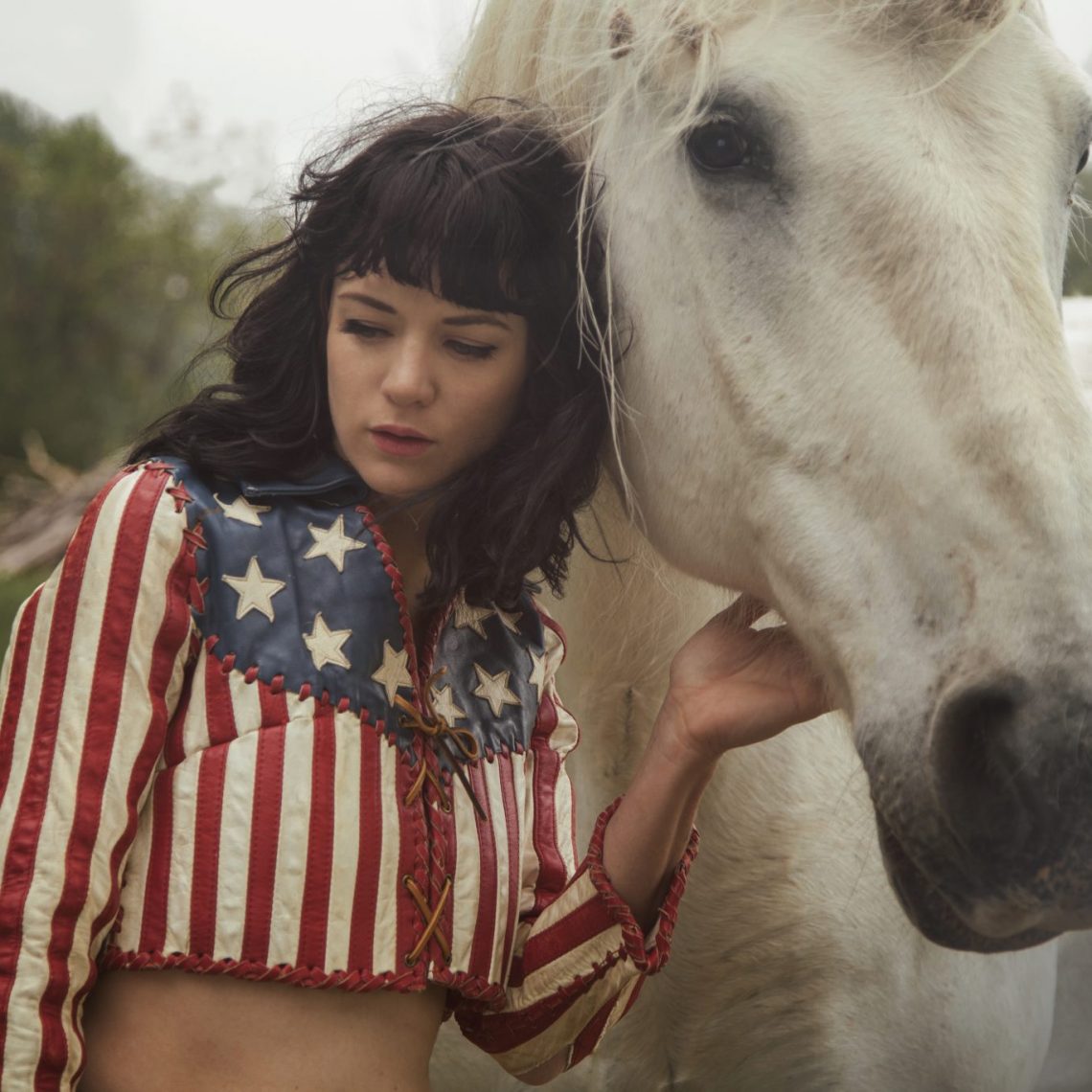 She’s due onstage in just a little bit, but Nikki Lane is currently in the middle of trying to get her, well, stuff together. She’s sitting in the dressing room at Stubb’s BBQ in Austin, idly sorting through an array of little items scattered across two cocktail tables: bracelets, trinkets, and totems, plus a toothbrush, Sharpie, rolling papers, embroidery thread, and various other essentials Lane can’t leave home without. Nearby, her boyfriend carefully glues back into place a broken bit of the small vintage tweed carryall the items travel in.

“It’s at least well-enough made that we are able to make it keep coming along — and it’s just so cool,” Lane says of the case. She likens it to a survival kit, but that’s really just the half of it.

“I’m the kind of person who keeps a lot of souvenirs,” she explains. “I like to buy things, collect things, have things. So out on the road I just kind of get depressed if I don’t have my stuff. This is just some of it, the tip of the iceberg.” 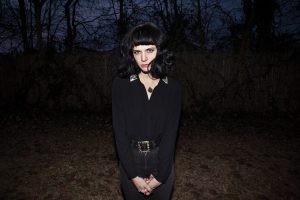 Lane may have a lot of baggage, but she sure knows how to make it work for her. Her new album, All or Nothin’, is rich with jabs at ex- lovers and all manner of lusty declarations and girl-power assertions gleaned from a still-young life lived fully — all of it fashioned into smart neo-trad C&W with the assistance of producer Dan Auerbach, of Black Keys fame. Since the album’s May release on New West Records, she’s toured non-stop, with several dates opening for Americana/indie- rock stalwarts the Old 97’s, and the heady buzz she’s collected along the way is a palpable presence in Stubb’s music room when Lane and her band take the stage. The good-sized crowd she’s drawn would be impressive even if it wasn’t a Sunday night; it’s thick with hipsters and especially hip young women just like Lane herself (“All you dudes out there oughta be thanking me,” she says). Lane also remarks that it’s one of her first shows as a headliner, and she makes good use of her expanded set time, running through most if not all of her new record as well as few songs from her 2011 debut, Walk of Shame, and a wildcard, non-obvious Tom Petty cover (“Saving Grace.”) Between songs she sasses playfully with her band and the audience, taking requests and even the hat off a fan in the front row during her encore.

And yet, as much as Lane’s confidence both onstage and on record suggests a woman doing exactly what she was born and always wanted to do, the fact is that her career is anything but the result of lifelong dreams, schemes, and ambitions. The whole time she was growing up in Greenville, S.C., she never even thought about wanting to be a musician, even though she was surrounded by “tons of music” her entire childhood.

“My mom loves Motown and oldies, my dad was really into ’80s and ’90s country, and my best friend, who was my next door neighbor, her dad was into Pink Floyd and Zeppelin, classic rock stuff like that,” she recalls. “And my grandfather was really into mountain music. But still, I really wasn’t that into music myself.

“I wanted to be a marine biologist, like every young girl of the ’90s,” Lane quips. “Then, I wanted to be an architect. But then I as like, I don’t nearly have the patience for something like that.”

At 19, bored and itching to get out of her hometown, Lane packed her stuff into a U-Haul trailer and headed to Los Angeles — still not entirely certain what she wanted to do. “I was going to be a fashion designer — and/or an A&R person; I couldn’t decide,” she says. “I thought an A&R person was a girl who went around with a credit card and fucked with rocker dudes.”

Instead she did time as a karaoke bar waitress and as a nanny, and eventually started designing and decorating shoes. When music finally presented itself as something else she could dabble in, it came about almost by happenstance. She started by singing background vocals on friends’ recordings after impressing them with her chops singing along to songs in the car. Then, just as casually, she began writing songs with a pal, just to do something with the melodies and lyric lines that just sorta started coming to her. But it was still nothing more to her than a casual dalliance. “I couldn’t even play guitar then,” she says with a shrug. 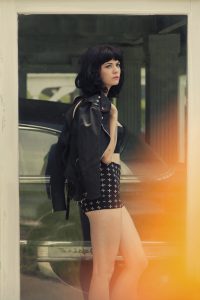 Fashion remained her main interest. After landing a lucrative sales gig in a high-end clothing store, Lane assisted a shopper who turned out to be fashion mogul Mark Ecko. She didn’t know who he was at first, but within 10 minutes Lane managed to talk him into giving her a job designing a women’s denim line. That’s the gig that landed her in New York City, which is where destiny finally caught up with her with a vengeance. “When I got there and got my heart trampled by my boyfriend at the time, all of a sudden there were songs,” she says. “Sometimes shit happens and it shocks shit out of you or into your head.”

Lane made an album out of a lot of those songs, but it never got released: she had it stored on a hard drive that ended up getting filched by a housekeeper. So she made another one, this time with far better luck. She secured a deal with a small indie label, I Am Sound, which released Walk of Shame. That record started netting her some attention, but not quite enough for her to comfortably keep on living in the Big Apple, so Lane packed up and headed South — albeit to Nashville rather than back home to Greenville.

Although her music career was already underway, Lane continued to make ends meet by exploring her other interests — namely, collecting and selling vintage clothing. “I made a decision to buy anything that I liked that had a good margin,” says Lane, who started vending her wares under the banner High Class Hillbilly. One day a guy poking around her flea market booth asked Lane if she’d sell him the jacket she was wearing, and she gave it up for a generous profit. The buyer turned out to be Dan Auerbach.

“It made him remember me when we met again through music,” Lane says. “He later sent me a text saying he’d finally heard one of my songs and liked it, and I wrote back: ‘Cool. Make my record.’”

Lane’s label at the time balked at the cost of having Auerbch produce, but neither Lane nor her luck were about to be deterred. She wrangled her way out of her deal, found a way to make the record with Auerbach on her own, and then Auerbach gave a copy to his backyard neighbor, Americana music heavyweight and New West Records recording artist Buddy Miller. And more or less just like that, voila — Lane had herself a new and far bigger record company in her corner and a very hip disc for them to get behind.

Of course it goes without saying that the Auerbach factor alone is going to open some doors for any up-and-coming young artist; in addition to his Black Keys fame, his stock as a producer is booming of late in the wake of projects he’s worked on for Dr. John, Valerie June, Ray LaMontage, and even Lana Del Rey. Still, All or Nothin’ is a record that would probably turn heads even without Auerbach’s marquee name on the back flashing, “Hey people, listen!” Lane’s singing throughout exudes her sweet-yet-tuff belle ’tude with a conversational lilt that covers the spectrum from languid embers to smoky flirts to searing licks of flame. She recalls many voices you likely know and love — think Loretta, Dusty, and Wanda, for starters — but ultimately sounds like no one but herself. The songs hit a similarly potent fission of familiar yet fresh, with Lane confidently hitting the mark whether aiming for vintage country twang (“Man Up,” “I Want My Heart Back”), sexy rockin’ psychobilly/New Wave swagger (“Sleep With a Stranger,” “I Don’t Care”), Muscle Shoals soul (“All or Nothin’”) or straight-up, catchy-as-hell Americana (“Love’s on Fire,” co-written with Auerbach and recorded as a smoking duet).

It’s a delightfully fun and varied mix, just like the myriad goods Lane has for sale at her merch table after her show: not just the usual CDs, vinyl, and T-shirts, but patches with her handmade skull logo (remember that embroidery kit from her survival bag?) and even her own line of coffee beans. Clearly, all that time she spent in retail, fashion design, and flea markets wasn’t for naught.

“All the things I’ve become good at came out of proving to myself that I could be good at it,” Lane says, tracing that motivation all the way back to growing up an “awkward, weird, badly dressed, bad- haircut little girl.” But seeing as how music seems to have chosen her as much as she chose music, she agrees that fate has played a pretty big role in her life, too. Or more to the point, fate and the willingness to roll with it. She sums up her secret to making the most of her fate as simply “flexibility … and the ability to change.”

“When I moved to California as a kid, I said the worst case scenario was that I would have to go back,” she says. “So far, I haven’t had to go back to shit.” 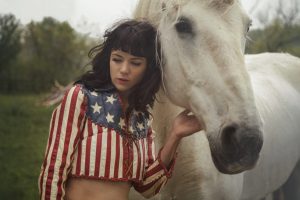