Joe Pug moving to Austin in 2012 wasn’t exactly headline news in town. After all, a guitar-packed van with out-of-state plates making its way into the ATX is a pretty common sight in the “Live Music Capital of the World” — as are songwriters of the Americana and alt-country persuasion. But what does make the 27-year-old folk singer’s move rather notable is the fact that Pug’s already tasted a fair deal of success all over the country and even the globe, thanks to his experience touring both the States and overseas with the likes of Steve Earle and Josh Ritter, not to mention as a headliner himself. And, as documented on his 2011 release, Live at Lincoln Hall, Pug had an especially good thing going back in his former hometown of Chicago. Back in the City of Broad Shoulders, he could more or less count on regularly playing to sold-out rooms of 500 or more people. Leaving that type of home-field advantage behind is something many of Austin’s coffeehouse heroes can scarcely fathom.

So far, though, Pug and his girlfriend have enjoyed Austin and made themselves a nice home on the city’s Eastside. But even though he’s a regular in a few of the local bars and makes a point to hit shows at the Parish and the Cactus Cafe, he’s taken a measured and decidedly non-carpetbagging approach to his musical life in Austin. 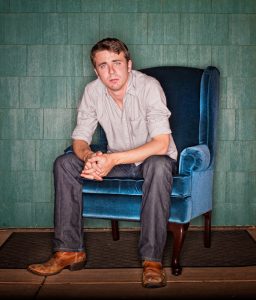 “I’ve dipped my toe into the community here a little bit, but I don’t want to be rude and force myself upon anyone,” he says from the front porch of his house on a clear yet chilly afternoon as spring creeps in. “I don’t really play Austin more than any other city I would when I’m on tour. Gordie [Quist] from Band of Heathens is a cool dude and has reached out to me as a colleague, but it’ll take many years before I can say I truly know what the Austin community is like and claim to be a real part of it.”

When asked why the move seemed like the right idea, given his cautious hesitancy to dive right into the deep end of Austin’s music scene, Pug notes that he simply knew he was ready for a new locale to experience and Austin was at the top of his list for prospective new homes. He’s also quick to tell you that legendary Texan names such as Blaze Foley and Joe Ely helped draw him to the state by the sheer power of their writing. Pug sees an honest and philosophical difference in the way the greats from Texas write their songs, compared to writers working in other regional styles.

“There’s this really cool combination of this plain-spoken music that at the same time is unafraid to cite poetic influences,” he says. “It’s kind of like this place where good ol’ boys aren’t afraid to read poetry. Texas songwriting is this weird, fascinating anomaly in that sense to me.”

Although he had already moved by the time that aforementioned Live at Lincoln Hall came out last fall, Pug’s new album, The Great Despiser, is his first studio release since landing in Austin. It’s his second full-length studio album, following early 2010’s Messenger and a pair of EPs, 2007’s rustic Nation of Heat and 2010’s In the Meantime. All of Pug’s releases to date have been very well received by Americana and indie-folk fans, but The Great Despiser is easily his most ambitious project to date. Regarding the album’s cinematic scope, Pug acknowledges that he’s continuing his artistic journey, but views his own progress and goals differently than others might.

“I do think we took this album in a direction people will feel is different because we used more instruments,” he says. “But to me, it just sounds better.”

While the new record is more sonically diverse than its predecessors, one thing that hasn’t changed is the way in which Pug can knock a listener down with just a verse of his prose.

“Other songwriters are going to think I’m nuts, but I’ve always thought of the arrangements as window-dressing to the actual song,” admits Pug. “What’s important to me is if a song can stand on its own over time and for there to be evident continuity throughout. I want the words I write to have a sense of timelessness to them.”

Pug is a seasoned performer who has already played both the Newport Folk Festival and Bonnaroo. But as any other self-supporting artist operating without the help of major-label money will attest, the key to sustainability is to continue making yourself vital and to keep people aware of your music, your product. Thanks to recent buzzed-about shows at March’s SXSW, which led to Rolling Stone praising Pug’s ability to paint a “conflicted portrait of America,” Pug has received his first serious taste of the public’s thirsty anticipation for new material. Now, all he wants is to keep it rolling — and to keep paying the rent.

“I’m of the mindset that I’m certainly ready for a big break,” he says with a matter-of-fact earnestness. “I want this album to win new fans, and to help me create the music that I want to make. Steve Earle once told me that the key is to try and subsidize your art, and that’s what I’m going for here.”