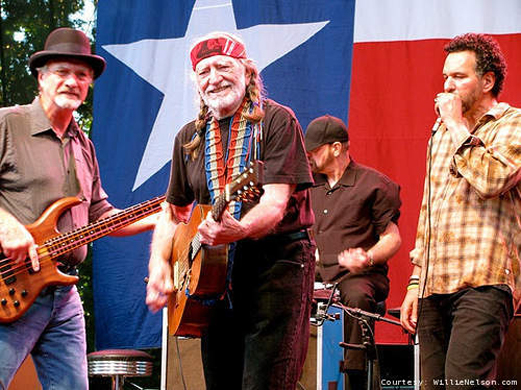 We lost many musicians in 2011 and they will all be greatly missed. Dan “Bee” Spears, bassist for Willie Nelson, is one that had a major impact on Texas music. He passed away on Dec. 8 at his property in Franklin, Tenn. The cause of death was listed as exposure to the elements; he had fallen down near his home and was found the next day. He was 62.

Spears started playing in Nelson’s band in 1968 when original bass player David Zettner was drafted into the Army. Zettner suggested to Nelson that he hire the 18-year-old Spears as his replacement and Willie took his advice. Spears was born on Aug. 11, 1949 in San Antonio, and grew up in Helotes — just across the road from John T. Floore Country Store, a venue that would become very important to the band in the early ’70s.

Spears joined the Nelson Family Band just in time to be a part of Nelson’s two groundbreaking albums for Atlantic Records, Phases & Stages and Shotgun Willie. In several published interviews with Spears, he said the hardest part about playing with Nelson was that he plays just behind the beat of his songs. Spears often said that in addition to playing his bass, he had to keep a close eye on what Willie was doing. “It’s a tricky business,” said Spears. “He’ll lead you down to the river and drown you if you aren’t paying attention.”

When Nelson signed with Columbia, he used his road band for the classic albums Red Headed Stranger and Stardust. Spears also played on several other Nelson albums, including The Sound in Your Mind, The Troublemaker, and To Lefty From Willie. Waylon Jennings recruited Spears to play bass on his career-changing album, Honky Tonk Heroes, a collection of songs penned by fellow Texan Billy Joe Shaver.

At press time, no permanent replacement had been named. In a phone interview, Spears’ longtime friend, Nelson’s drummer Paul English, said that his brother Billy English, who plays percussion in the band, will handle bass duties until a decision is made on who will replace Spears. “It’s been hard on us all,” English said. “We lost Poodie [Locke] a few years ago, now Bee. He’s going to be missed dearly and will be hard to replace, but we plan to carry on and keep playing. That’s what Bee would have wanted.”