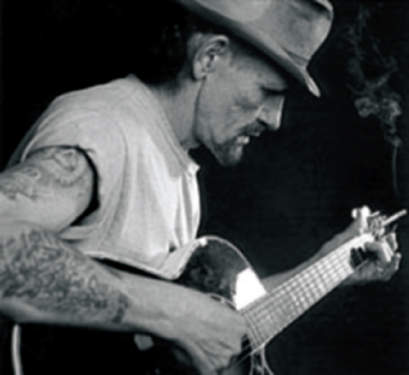 Calvin Russell, one of the true Austin outlaws, died early April 3 from liver cancer. He was 62.

A rough-and-rowdy contemporary of Blaze Foley and Townes Van Zandt who often hung around Foley’s unofficial headquarters, the legendary songwriter dive the Austin Outhouse, Russell lived a William S. Burroughs-ish life of petty crime and drugs mixed with art until fate and a cassette of demos changed all that for good. Russell’s A Crack In Time became a huge accidental hit record in Europe in 1990, when Patrick Mathe of the French roots-music label Blue Rose put the album out after hearing a demo cassette Russell passed to him at a party. Russell parlayed his breakthrough into a huge career in Europe, where he was treated like French rock idol Johnny Hallyday and other European pop stars who remain virtually unknown in the U.S.

Russell grew up on the mean side of Austin, but after years as a sketchy character on the local songwriter scene and three stretches in prison for petty crimes and drug use, he finally achieved the artistic and financial success that allowed him to right his personal ship. Due to his European celebrity, after 1990 he began to live in Europe much of the time. Russell often imported other Austinites, like Jon Dee Graham, to tour with him, giving him the authentic Texas sound that is golden in Europe.

“On one of my earliest gigs with Calvin, we played one of the largest halls in Paris,” Graham recalls. “And he sold it out two nights out of three. I thought, ‘This is what playing with Elvis must be like.’ It’s so hard to imagine a guy like Calvin having that kind of celebrity. We’d stop in some village in Switzerland and word would just spread that Calvin was in town. It was crazy, like being in a traveling circus. I’ll always be grateful to Calvin for making it where I could see all of Europe I ever want to see.”

Graham also credits Russell with giving him much needed perspective as a musician. “I’ve made a career out of my limitations,” says Graham, “and I learned most of that from Calvin. He perfected that. He also told me three things that have stuck with me permanently: 1) Don’t ever take being a musician for granted, we are very lucky to be doing this; 2) Don’t take your audience for granted, show them respect; and [laughs] 3) Always count your money when you get paid.”

Russell was the epitome of the grizzled, gritty, whiskey-and-cigarettes-voiced troubadour, and over the course of his career he issued 15 quality albums both here and abroad, never straying far from his literate, down-to-earth, blue-collar roots rock template. As his health deteriorated, Russell spent more time around Austin, where he played quiet residencies and the occasional one-off gig to smallish audiences. His European fame never really translated into much of an audience in his hometown.

“We had this joke in the band when people would ask us where Calvin lived,” recalls Graham. “We’d always answer,  ‘At his apartment in Paris, on his island in Rotterdam, and in his trailer house in Pfleugerville.’ That says so much about Calvin.”