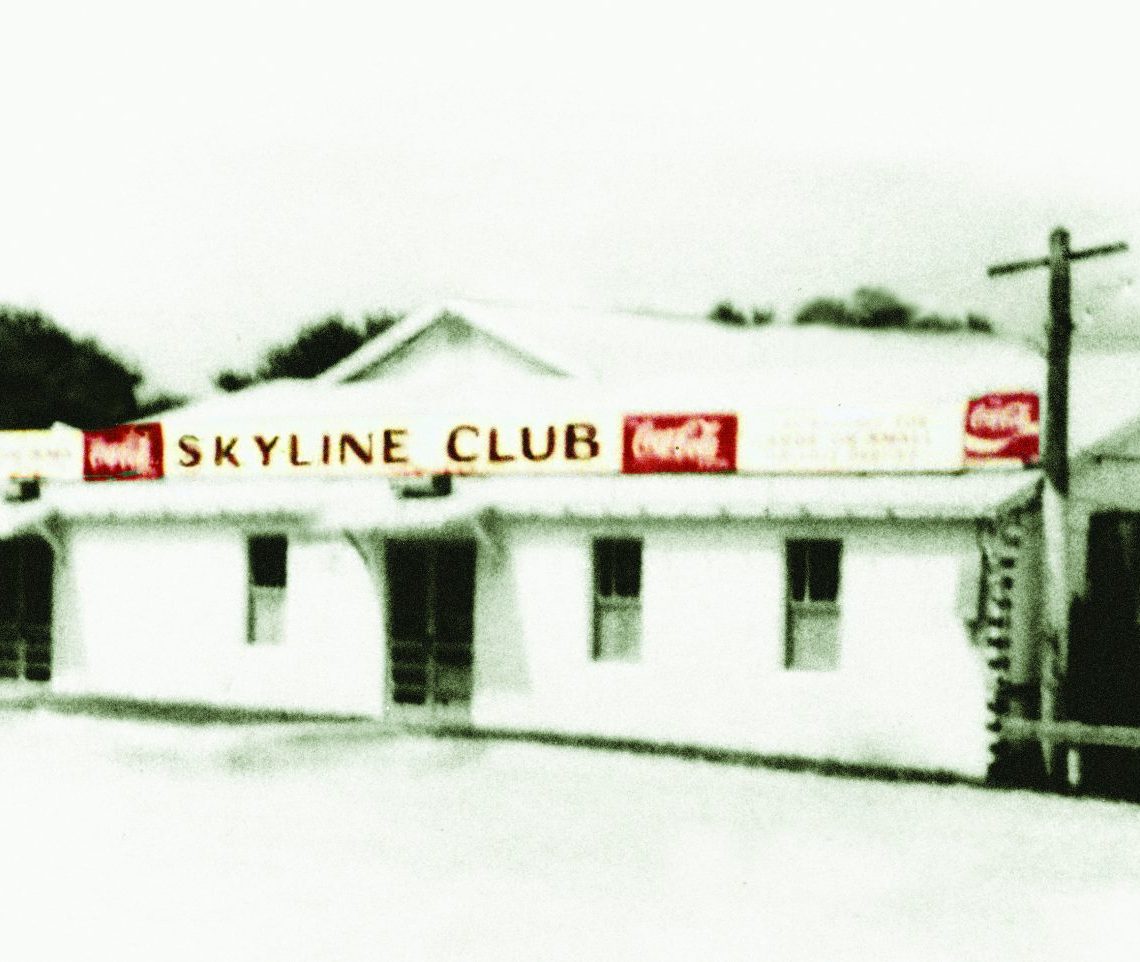 The Eerie History of the Skyline Club

There’s no trace of it today, but the bar that once stood on what is now the corner of North Lamar and Braker Lane in Austin, Texas, is legendary for the performers that took the stage there: Johnny Cash, Elvis Presley, Willie Nelson, Ray Price, George Jones, Patsy Cline, Lefty Frizzell, Bob Wills, Doug Sahm, Marty Robbins, Webb Pierce, Homer and Jethro and countless others. And it is even better known for two giants of country music who literally played their swan songs there. 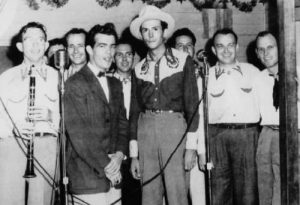 The Skyline Club, built in 1946, was then four miles north of Austin. Until 1970, North Lamar Blvd. was known as the Dallas Highway. On Dec. 19, 1952, Hank Williams made his final public appearance at the Skyline. Two weeks later, he died in the back seat of his Cadillac on New Years Eve on the way to a show in Canton, Ohio. He was just 29.

A 30-year-old performer named Johnny Horton came to play the Skyline Club eight years later on Nov. 4, 1960. The young singer stood in the dressing room waiting for show time and wouldn’t enter the bar area. His manager, Frank Tillman, knew why. Horton had confided with him that he believed that he would die at the hands of a drunkard. For years, he had been haunted by premonitions of his own death — premonitions which had been growing stronger and stronger. One can only imagine that that feeling was weighing more heavily on his mind that night than ever before. Hank Williams, after all, had been a friend of Horton’s. And Horton was now married to Williams’ widow, Billie Jean.

There were certainly other places Horton could have been that night. He’d been invited to the premier of the John Wayne movie, North to Alaska, having sung the title track. He’d also been invited to a disc jockey convention in Nashville. But Horton had written a hot check and was in need of money. Franks had booked the Skyline gig with owner Warren Stark just four days earlier. Horton hated playing places where beer and whiskey were served, but Franks had promised that this would be the last time.

At the time, things were really starting to pick up for Horton’s career. Still, he was finding it difficult to shake off the jitters. According to Franks, Horton knew his death would be tragic. He’d even told his friends that he would attempt to contact them from beyond the grave should something happen to him. 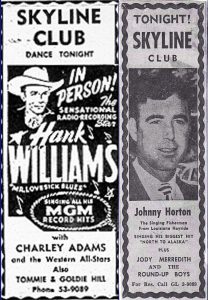 The morning of his Skyline gig started with a phone call to Johnny Cash. Horton had been worried about Cash’s drug problem. Johnny’s wife, Vivian, answered the phone and told Horton that her husband was in the shower. In truth, Cash had opted not to take the call because he was, indeed, messed up on drugs and didn’t want his friend to know — a decision he’d later come to regret. After a goodbye kiss to Billie Jean, Horton got in his new 1960 Cadillac and headed to the home of guitarist Tommie Tomlinson, who had just flown in from a recording session in Nashville. From there, they headed to the home of Franks, who in addition to being Horton’s manager was also his bass player. Franks was recovering from surgery and his wife had begged him not to make the trip, but at Horton’s insistence, Franks relented. Then it was on to Austin. On the way, the three stopped in Rusk, Texas, for a short visit with Horton’s mother.  They arrived in Austin at about 5 p.m. and checked into a motel before arriving at the club.

That night, the opening act was Jody Merredith and the Round-Up Boys. Because of Franks’ medical condition, it was decided that a local bass player should be used for Horton’s show. Merridith called his friend Henry Hill, who came down to sit in with the band. Despite the substitution, the show went smoothly, and the three 20-minute sets came and went quickly. Some of Horton’s friends from the Louisiana Hayride, including Sammy Allred and Dewayne Smith of the Geezinslaw Brothers, had even come to see him perform and to lend their support.

According to Merredith’s wife, Maida, Horton was in a hurry to leave as soon as the show was over. The band loaded the equipment into Horton’s Cadillac for the drive back to Shreveport, where Horton had recently moved because of his weekly spot on the Louisiana Hayride. Franks climbed in the front seat with Horton and Tomlinson rode in the back. The drive would be a long one, but Horton was looking forward to duck hunting the next morning with his friend, Claude King.

Maida Merredith wrote in a letter that the trio stopped at a café in Round Rock for coffee before heading east on Hwy 79. Franks would later say that Tomlinson was concerned about the speed they were doing. “Don’t worry,” Horton said, “I’m doggin’ it in” — a line from one of his early rockabilly numbers, called “I’m Comin’ Home.” At about 2 a.m., they reached the town of Milano, near College Station, about 55 miles outside of Austin. Horton no doubt remembered Milano well, because that was the town he was passing through when he first heard about Hank Williams’ death on the radio.

Suddenly, from out of nowhere, a truck came into their headlights. It swerved into one side of the bridge they were crossing, then careened off of the other side. Franks, who had fallen asleep and was leaning against Horton, was awakened by Horton’s shoulder jerking away while trying to steer clear. The truck plowed head-on into the Cadillac.

Horton died in the crash. Franks suffered head injuries and Tomlinson received numerous leg fractures, which eventually lead to the amputation of his leg.  The driver of the truck, an A&M student named James Evan Davis, who was intoxicated, walked away unscathed.

Horton’s premonitions of being killed by a drunk had come true. According to Cathy Quick, her father, Warren Stark, was called to the hospital in Cameron to identify Horton’s body, because his business card was found in the singer’s pocket. Austinite Jim Grabowske, who played steel guitar that night, had also played with Hank Williams at the Skyline Club. He remembers that word about the wreck didn’t get around until the next day. They drove out to Cameron, where the car had been towed, to see the crumpled heap — something he says he’s always regretted doing.

Legend has it that Davis, the drunk driver, was a big fan of country music and that he later told his college roommates, “Well, boys, I just killed my favorite singer.” He received a five year suspended sentence but it is believed that he later served prison time for violation of his probation.

The coincidences of the deaths of Hank Williams and Johnny Horton are quite eerie. Both men made their last public appearances at the Skyline Club. Both men were married to Billie Jean at the time of their deaths. Both men met their fates in Cadillacs. And Horton died in the town where he’d first heard about Williams’ death. 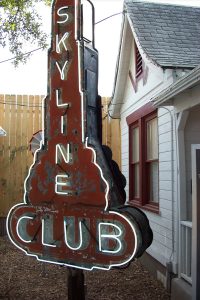 Despite attempts to have the building designated a historical landmark, the Skyline Club fell to the wrecking ball in 1989 in the name of progress. Today, a CVS drug store stands proudly in testament to that “progress.” The original neon sign, fortunately, survived and today is displayed under the oaks in the back at Hill’s Café in South Austin.

This November marks the 50th anniversary of the tragic death of Johnny Horton.  It is said that Johnny Cash read from the book of John at the funeral.