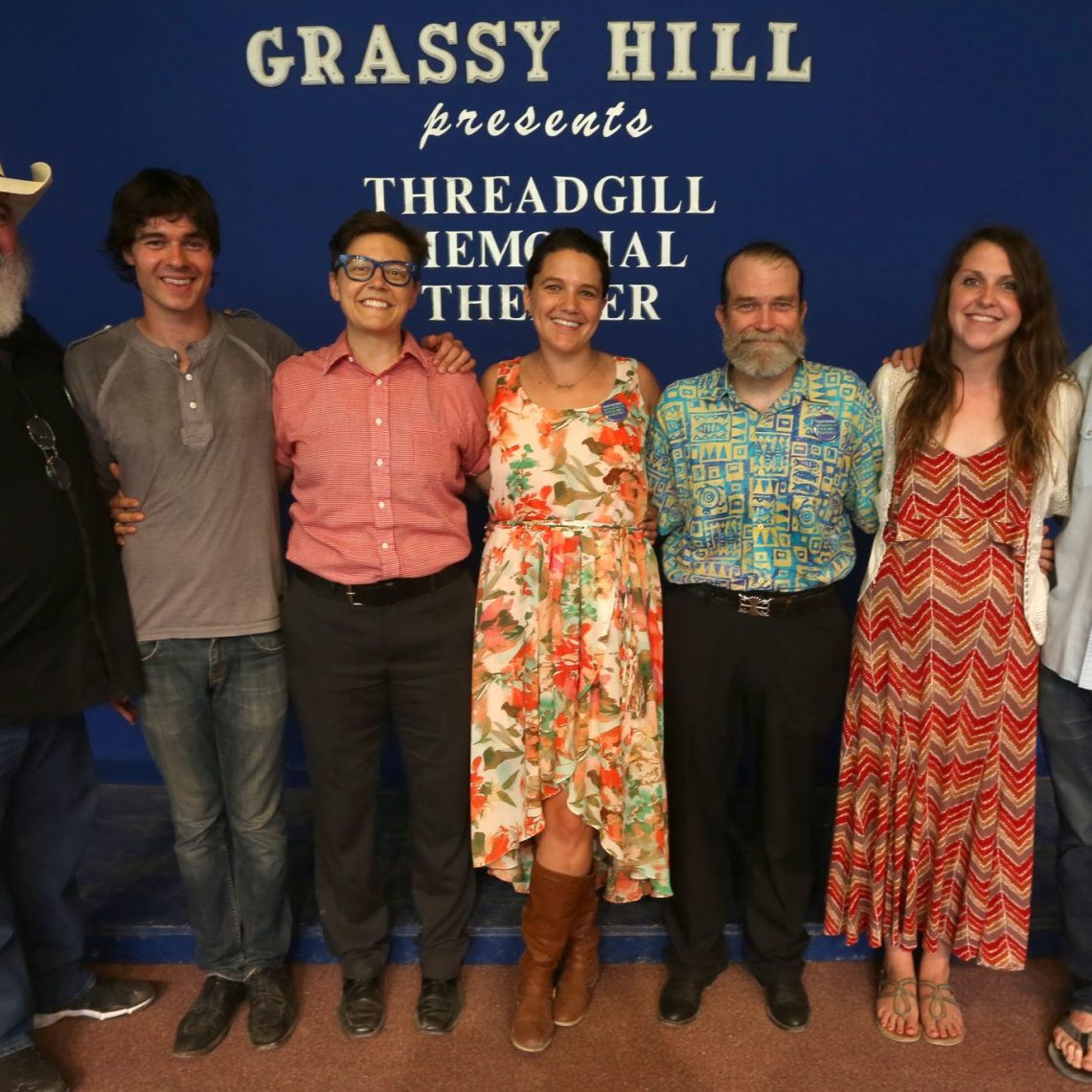 The 20l4 Kerrville Folk Festival, which ran from May 22 through June 8 at Quiet Valley Ranch, featured many of the things Kerrverts have come to expect from the three-week celebration of song held annually since 1972. There were the genuinely heartfelt hippie-dippish “Welcome home’s” from longtime friends and the corps of ever-smiling volunteers; the nightly song circles at interestingly decorated camps like Camp Stupid and Camp Misinclined that have kept Kerrville weirder than Austin can ever hope to be again; the occassional tent-rattling, passing Texas cloudbursts that always threaten to blow it all away; and an array of main-stage performances from popular and perennial favorites like Judy Collins, Trout Fishing in America, Terri Hendrix and Eliza Gilkyson. 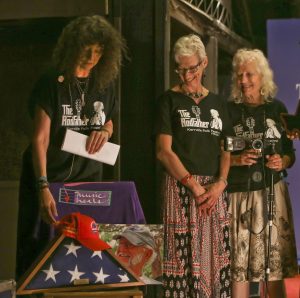 Dalis Allen, Vickie Bell and Merri Lu Park, who cared for Rod Kennedy during the last days of his life, at the “For the RodFather” tribute. (Photo by Susan Roads)

But the more things stayed the same, the more Kerrville changed this year. Because this was the first Kerrville without its beloved founding father, Rod Kennedy, watching proudly from his reserved seat at the side of the stage. Kennedy, who retired a decade ago but kept attending the festival year after year, passed away just weeks before the gathering of the music-loving tribe his vision inspired.

“I’m sure many of us felt his presence during the festival,” said producer Dalis Allen, Kennedy’s longtime friend and protégé. For Allen and many other attendees, performers included, the multi- artist “For the RodFather” tribute set that closed out the third night was one of the highlights of this year’s event — albeit a bittersweet one.

“As much as I loved hearing the songs, it was the stories told about Rod that really celebrated his memory,” Allen continued. More than a few remembered initially finding Kennedy — a former Marine — a rather intimidating, hard-to- read presence who subsequently became one of their biggest supporters. “Others talked about how surprised they were to see the promoter of a festival sitting there truly soaking up their performances and really listening. That’s not always the case. But with Rod, the whole purpose was to hear the song.”

One of the many legacies Kennedy leaves behind is the festival’s New Folk Contest, which he — along with Peter Yarrow — created to help emerging songwriters find an appreciative audience. The imprimatur of “New Folk Winner” is, today, perhaps one of the most highly coveted titles of songwriters worldwide.

One of this year’s six New Folk winners, C. Daniel Boling from New Mexico, who calls New Folk “the holy grail of performing songwriter competitions,” beat the odds and earned the New Folk Winner designation after seeing his name, not among the 32 finalists, but listed as the third of four alternates. Grabbing a slot days before the festival when a third finalist had to cancel, Boling found himself going all the way from also-ran to the winner’s circle. It was the third year in a row an alternate has taken that route.

“I think that just shows that what Dalis tells us is true,” Boling said. “There are just so many great songs entered every year and it may just have been our time.” 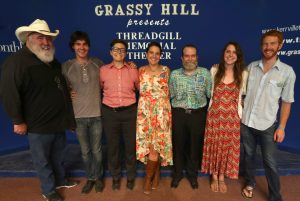 Boling and the rest of this year’s New Folk winners — Frank Martin Gilligan, Matt Nakoa, the Lovebirds, Caroline Spence, and Connor Garvey — will be touring Texas later this fall and taking part in a special concert on the opening night of FischerFest, scheduled for Nov. 7-9 at the Fischer Dancehall in Fischer, Texas. Joining them will be previous New Folk winners such as John Gorka and Hal Ketchum. Before that, though, Kerrverts who can’t wait until next year to go “back home” to Quiet Valley Ranch can look forward to the Kerrville Fall Music Festival over Labor Day Weekend (Aug. 29-31). Artists announced so far include Vance Gilbert, Jon Dee Graham and son William Harries Graham, Ponty Bone, Amilia K. Spicer, Nora Jan Struthers, Charlie A’Court, Willy Porter, and more.

Next post Lars Attermann: "Shanghaied Into the Lonely Sea"